Her tweet drew both support and criticism with nearly 40,000 likes and more than 5,000 retweets 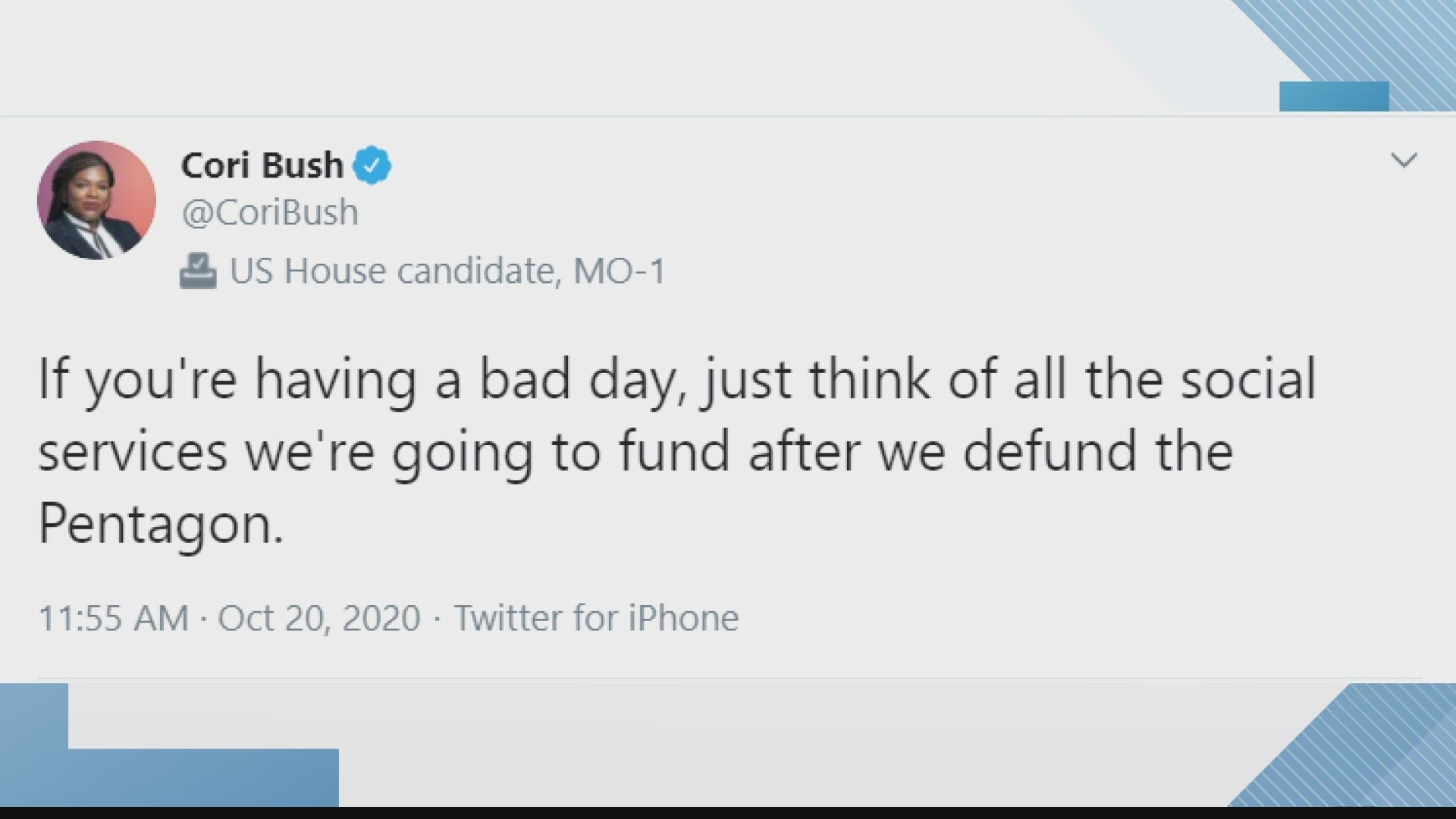 A tweet from her verified Twitter account on Tuesday read, “If you’re having a bad day, just think of all the social services we’re going to fund after we defund the Pentagon.”

Her tweet drew both support and criticism with nearly 40,000 likes and more than 5,000 retweets.

Bush's opponent in the November election, Anthony Rogers, quote retweeted her and said, “the person running against me might be a little slow…”

Rep. Ilhan Omar (D-Minn) was among those who retweeted Bush’s tweet and People for Bernie, which is a group that supports Bernie Sanders, responded to Bush’s tweet.

The Senate Budget Chair after defunding the Pentagon pic.twitter.com/UILrEVrMBZ

State Sen. Jill Schupp (D) shared the following on her Twitter, "As the daughter of a marine veteran & an elected official in a state that's home to thousands of veterans & multiple military installations, I do not believe we should defund the Pentagon." "Unlike my opponent, I am not afraid to speak out against ideas that I believe are wrong for Missouri, even when those ideas come from my own party," she added.

“When you talk about defunding the police, as you well know what I've said about that, when you talk about defending the Pentagon, that is not to be taken lightly by anybody in the state of Missouri. And as a veteran, I find it personal when you start talking about trying to do away with our men and women that serve this country, that serve this state,” Gov. Parson said.

“Missouri is 15th in the United States for people serving our country, which means this is a very patriotic state. And to make those kind of comments are one just in mature lack of experience and you're responsible,” he added.

5 On Your Side reached out to Bush’s office Wednesday but has not heard back as of this writing. This story will be updated.

Militarization makes up 64% of our federal budget.

Medicare & Health are 6%. Education is 5%. Social Security, Unemployment, and Labor together are 3%.

Ignorance is thinking those priorities keep our families safe.

The Department of Defense has never passed an independent audit, yet we continue to give them money unchecked.

Ignorance is the Trump administration *INCREASING* the Pentagon budget by more than $100 billion since he was elected.

.@BernieSanders and @EdMarkey proposed a 10% cut on the Pentagon budget to use to fund health care, housing, childcare and educational opportunities for cities and towns experiencing a poverty rate of 25% or more.

Ignorance is blocking this bill knowing it would save lives.

Yes I want to change our priorities. We can fund Medicare for All, guarantee housing, and enact a Green New Deal. We can make sure no veteran goes unhoused or without care. We can have a government that actually works for us.

At least 3 generations of my family have served this country in the military. My father’s been a public servant his entire life.

I’m going to Congress to build a country they’ll be proud of.