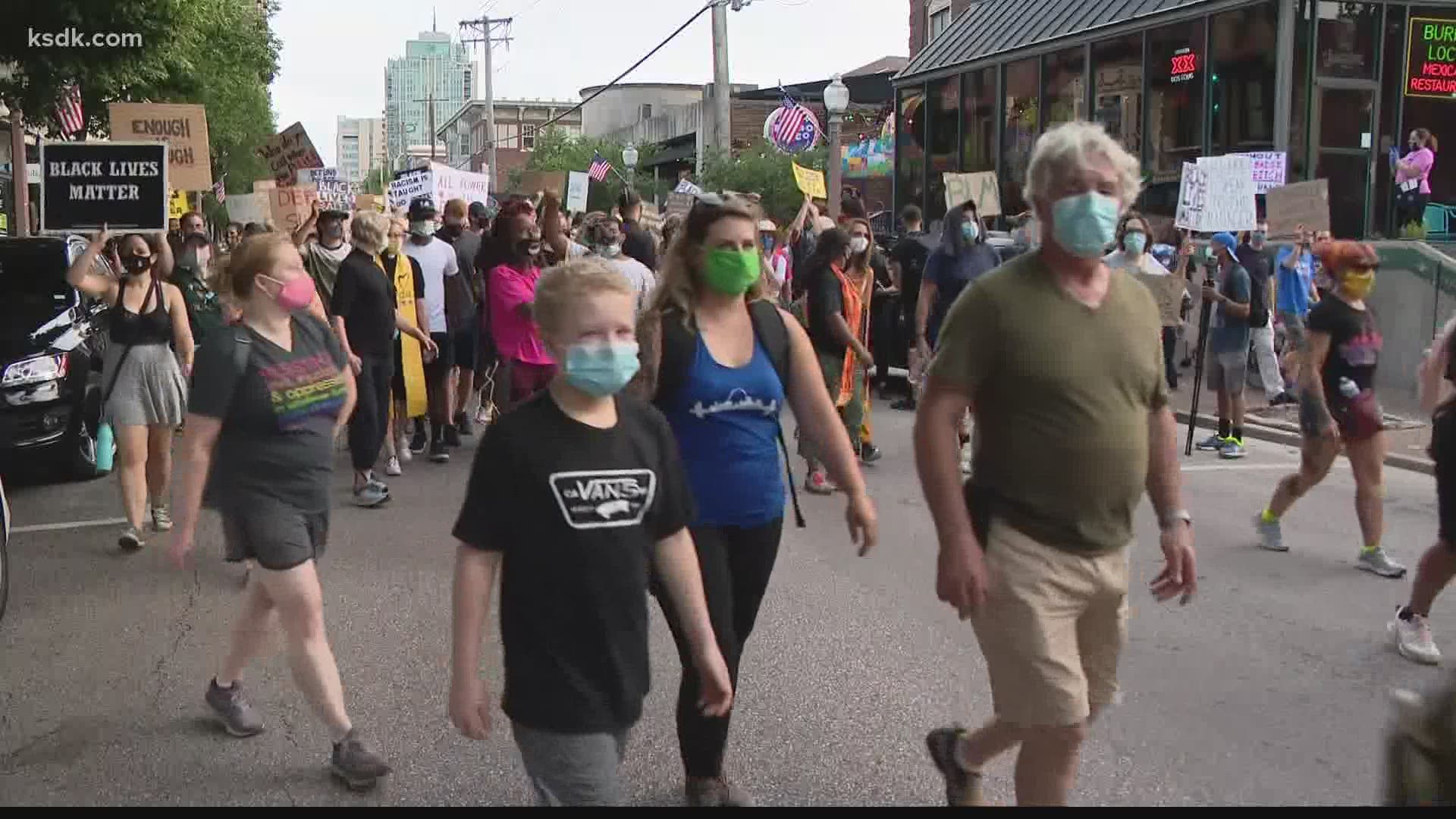 ST. LOUIS — Several hundred protesters made a peaceful return trip Friday to the St. Louis mansion owned by a white couple whose armed defense of their home during an earlier demonstration earned them both scorn and support from across the globe.

Protesters marched along the busy public boulevard called Kingshighway, which intersects with Portland Place, a private street that is the site of the Renaissance palazzo-style home of Mark McCloskey, 61, and his 63-year-old wife, Patricia.

Chanting protesters on Friday stopped at the gate just outside the McCloskey's home for about 15 minutes. The gate that closes the private street to non-residents and extra metal barriers blocked the entrance to Portland Place, where the protesters had walked earlier in the week on their way to the mayor’s home nearby.

Inside the gate, more than a dozen men in plain clothes walked the grounds and peered out from a second-floor balcony of the couple's home. One protester briefly straddled an iron gate as if he was going to jump over, but did not. No one threw anything and no one behind the gates showed arms or aggression. One man on the McCloskey's balcony clapped along with the chanting protesters. 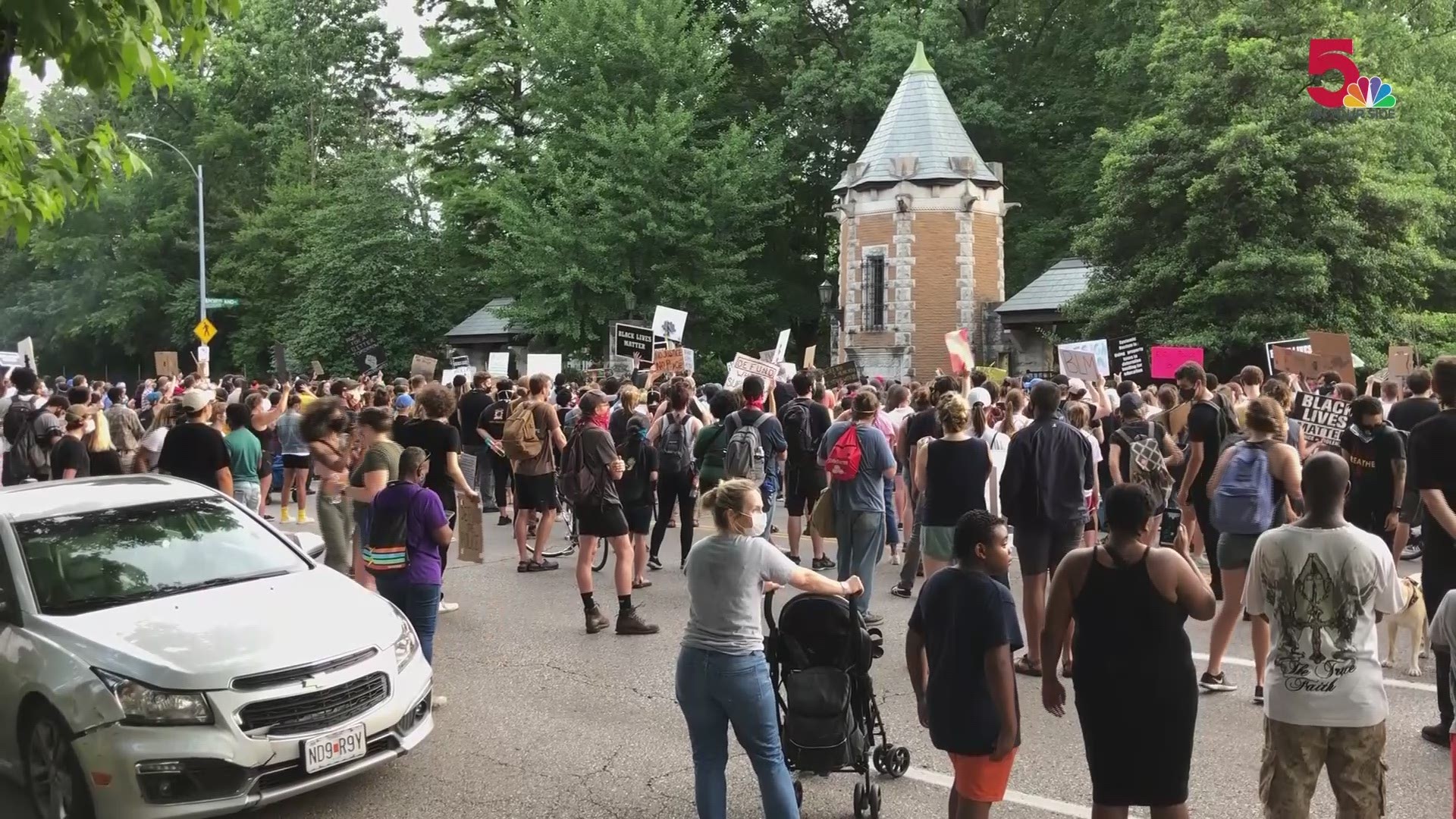 The racially diverse crowd on Friday carried signs reading “Black Lives Matter,” “Defund the Police” and “No Justice, No Peace,” and chanted slogans including, “when Black lives are under attack, what do we do? Stand up, fight back,” and “this is what democracy looks like.” 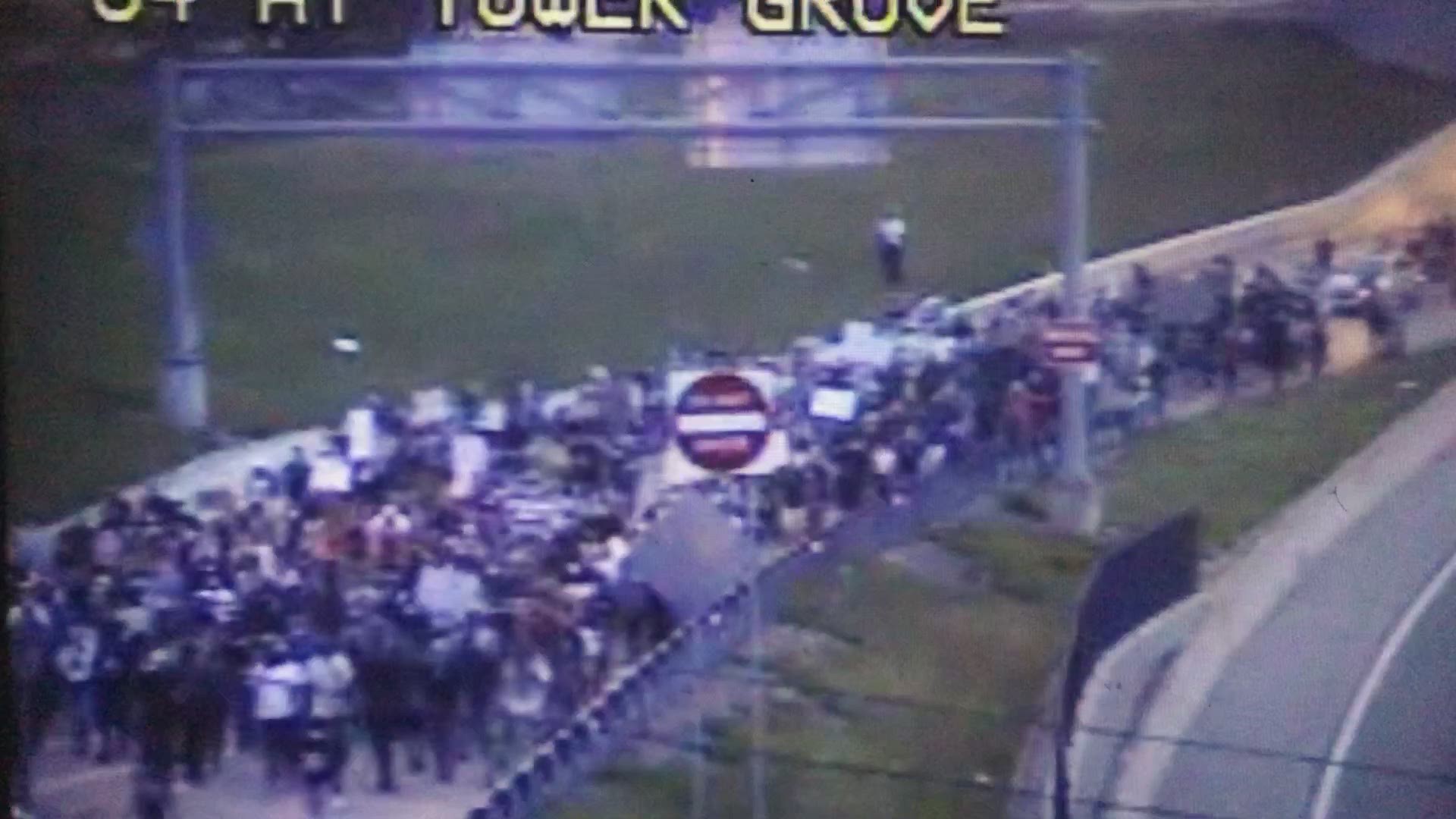 It was not immediately known if the McCloskeys were home.

The marchers then left and walked along the busy boulevard lined with condominiums, upscale apartments and hospitals to Interstate-64. Police had closed that road to traffic in both directions and were allowing the protesters to march onto the highway, where they sat for several minutes in honor of George Floyd, who was handcuffed and died May 25 after a white Minneapolis police officer pressed his knee on Floyd’s neck for nearly eight minutes.

The latest rally organized by the group Expect Us is among several protests in St. Louis in the weeks since George Floyd’s death in Minneapolis reopened longstanding concerns about police treatment of Black people in the region.

The McCloskeys are personal injury attorneys who suddenly became famous last Sunday. As an estimated 500 demonstrators marched near their home, the couple heard a loud commotion and saw a large group of people break an iron gate marked with “No Trespassing” and “Private Street” signs, according to a police report.

RELATED: 'Expect Us' protesters rally in Central West End, march onto I-64

Video posted online and viewed by millions showed Mark McCloskey wielding a long-barreled gun and Patricia McCloskey waving a small handgun. No shots were fired. That same video showed the protesters walking through the gate and it was unclear when it was damaged.

As days went by, photos of the incident evolved into memes on both sides of the gun debate — some supporting the McCloskeys as examples of people protecting their own property, some making fun of them for pulling guns during what many perceived as an otherwise peaceful protest.

The attorney for the couple, Albert Watkins, said they are longtime civil rights advocates and support the message of the Black Lives Matter movement. He said they grabbed their guns when two or three protesters — who were white — violently threatened the couple, and their property and that of their neighbors.

Demonstrators on Sunday were simply passing by the McCloskeys home on the way to the home of Mayor Lyda Krewson, a Democrat. She drew their ire on June 26 when she read aloud the names and addresses of several residents who wrote letters calling for defunding the police force. The group chanted, “Resign, Lyda! Take the cops with you!” Krewson’s home is a few blocks from the McCloskeys’ home.

A letter released Wednesday by more than three dozen neighbors of the couple condemned “the behavior of anyone who uses threats of violence, especially through the brandishing of firearms, to disrupt peaceful protest, whether it be in this neighborhood or anywhere in the United States.”