Randy Hays will go to federal prison for his role in the attack on Luther Hall, who was working undercover as a protester in 2017 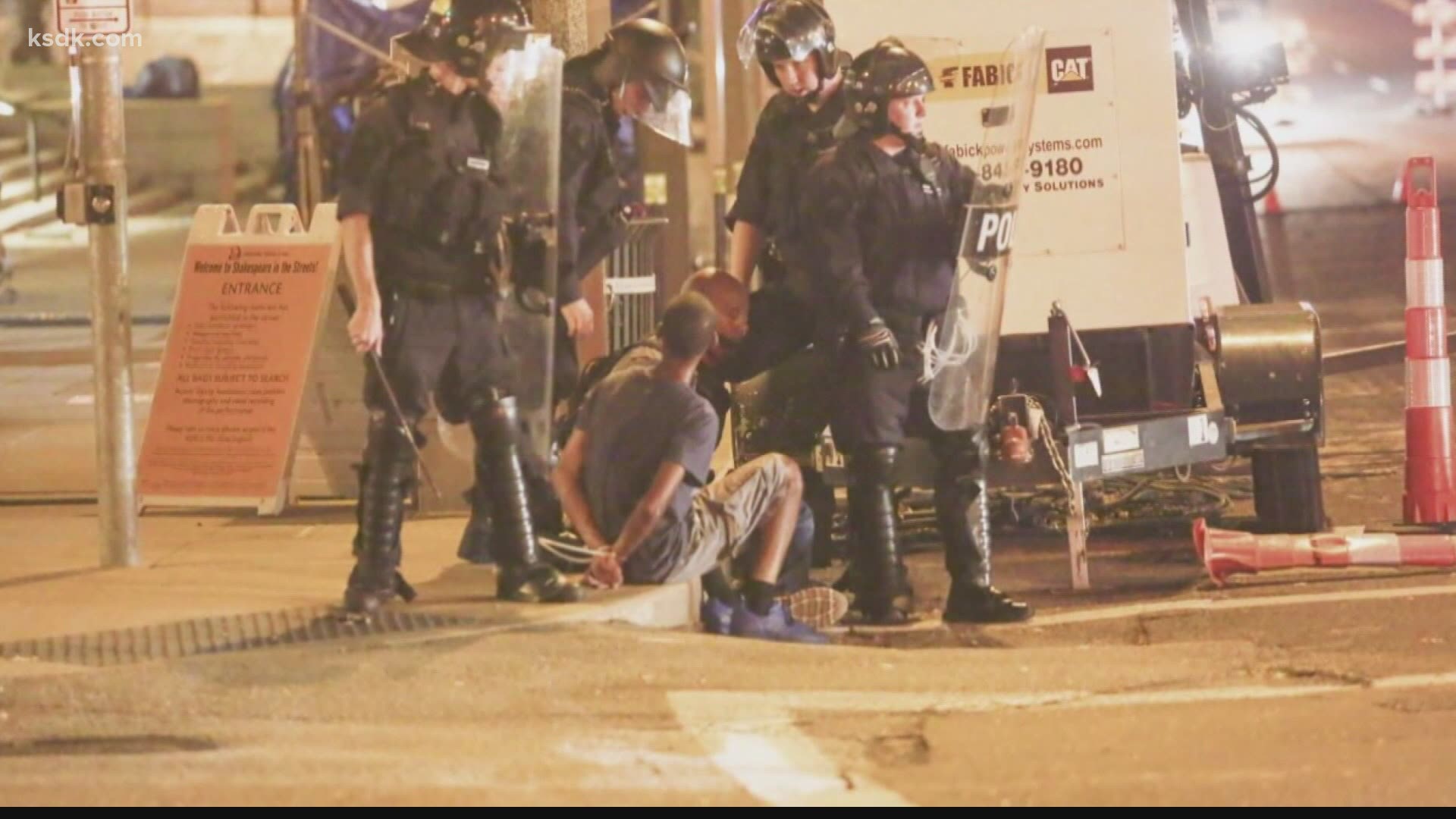 ST. LOUIS — In an emotional hearing Tuesday, a former St. Louis police officer was sentenced to more than four years in prison for his role in the beating of a fellow officer who was working undercover as a protester in 2017.

Randy Hays, 34, pleaded guilty in 2019 to a felony count of deprivation of civil rights under the color of law. He has remained free on bond as he has awaited his sentencing.

A judge sentenced Hays Tuesday afternoon to 52 months in prison and two years of probation. Prosecutors wanted 70 months, while the defense was asking for 36 months. He had faced up to 10 years in prison.

Hall's statement read, in part: "On September 17, 2017, my career ended, and a long journey of pain, stress, heartbreak, betrayal, and mistrust began. I also learned that my 22 years of dedicated service meant nothing to the St. Louis Metropolitan Police Department and the St. Louis Police Officers Association except to falsify documents and reports, release false information to the media and diligently work to get out ahead of this."

Hays had planned to read a statement to the court, but was too emotional, so his attorney, Greg Smith, did it for him. Hays pleaded guilty to the charges against him about two years ago, and testified against fellow officers accused of the assault at a trial in March.

"My first lieutenant told me, 'Regardless of my actions, I must always take responsibility for those actions,'" Hays wrote. "The past few years have been very rough on me and my family and my actions on this evening are something I truly regret.

"I'm greatly sorry for the effect they had on Luther Hall and his family as well...As I replay that night in my head, there are so many things I would have done so differently...That evening I chose wrong."

Note: The video above is from the trial of the officers.

Hays is one of five officers who were federally indicted for their alleged roles in the assault of Detective Luther Hall in September 2017 as they tried to arrest him after a dispersal order was given. It’s a case with racial undertones to it, as Hall is Black and the officers accused of assaulting him are white.

Hays admitted to striking Hall with a baton and shoving him to the ground even though he was not resisting arrest. Hall was a 22-year veteran of the department at the time and dressed in plain clothes carrying a camera and a cellphone to document any crimes or property damage he saw during the protests.

Hays' attorney said he was suffering from Post-Traumatic Stress Disorder following a fatal officer-involved shooting about a year before the assault — a shooting for which the department awarded him a Medal of Valor.

He said his client took a job at a plastics company following his departure from the police department following his guilty plea and has been promoted three times.

District Judge E. Richard Webber read portions of the letters he received from Hays and Hall supporters before handing down his decision.

One of those letters came from Hays' former partner, who wrote that he was of mixed race and hadn't spoken to Hays in about six years after their lives moved on.

"I've never known Randy to be aggressive toward anyone," he wrote. "We've never broken the trust of the community."

The judge noted how unusual it is for him to get letters of support from a defendant's ex-wife, ex-father-in-law and ex-brother-in-law. His ex-wife called him a "good father" to his 5-year-old daughter.

"This is a case that calls for accountability and mercy," Webber said. "It's a case that pulls at the deepest heartstrings because someone has been injured...

"Then there's the mercy issue. There's a cycle of hopelessness and helplessness when a father is taken away from a child."

Webber allowed Hays to voluntarily surrender to the Marshals, so he will begin his sentence at a later date.

His attorney said Hays believed the sentence was "fair."

"Randy was a good police officer, a good man, a good father and he’s paying dearly for what he did," Smith said. "But again, he accepted that responsibility, and again he’s going to move on...

"I have no doubt he’s going to land on his feet when he gets back out."

Hays’ girlfriend, former Officer Bailey Colletta, has also pleaded guilty to lying to the FBI and to a grand jury about the attack. The feds have asked a judge to send Colletta to prison for two years instead of the maximum of four. In court filings for that case, First Assistant U.S. Attorney noted Colletta was not directly involved in the assault, but told the FBI Hall was taken to the ground gently even though she watched other officers, including Hays, tackle him.

She is scheduled to be sentenced Thursday.

Prosecutors questioned Hays about text messages he exchanged with Boone the day after the assault, in which Hays told Boone he felt justified in his use of force that night because he believed Hall resisted and wrote if Hall had been just a protester, there “wouldn’t be a problem at all.”

Hays said Boone kept his knee on Hall’s shoulder during the arrest, and that he saw Korte kick Hall in the side of the face while he was lying face down on the pavement.

Defense attorneys for Myers and Korte pointed out inconsistencies in Hays’ statements about their client’s roles in the assault.

Myers’ attorney Scott Rosenblum noted how video evidence showed his client was not where Hays’ told the feds he was, and how he testified under oath Myers didn’t have any role in the assault even though he said he did as part of his plea agreement.

Rosenblum also noted inconsistencies in statements Hays made in his plea agreement and proffer, in which he stated he struck Hall in his right leg but signed other documents saying he struck him in his torso.

Rosenblum also probed Hays about why he told the FBI he believed Hall was resisting arrest, then said he wasn’t in his plea agreement.

Korte’s attorney, John Rogers, noted how the FBI conducted 120 interviews with witnesses and Hays was the only person who said his client kicked Hall in the face.

Korte was acquitted in that trial.

Myers was acquitted of the deprivation of civil rights charge, but the jury hung on whether he destroyed Hall’s cellphone to conceal evidence it captured of the assault.

And the jury hung on whether Boone deprived Hall of his civil rights.

At a re-trail of Boone and Myers in June, the jury convicted Boone of depriving Hall of his civil rights – so he, too, is facing up to 10 years in prison. His sentencing has been scheduled for Sept. 15.

The jury hung once again on whether Myers destroyed the cellphone to impede the investigation.

The U.S. Attorney’s Office has not said whether it will try Myers for a third time on the charge.

Jurors told the I-Team they were split 7 to 5 on whether to convict Myers.