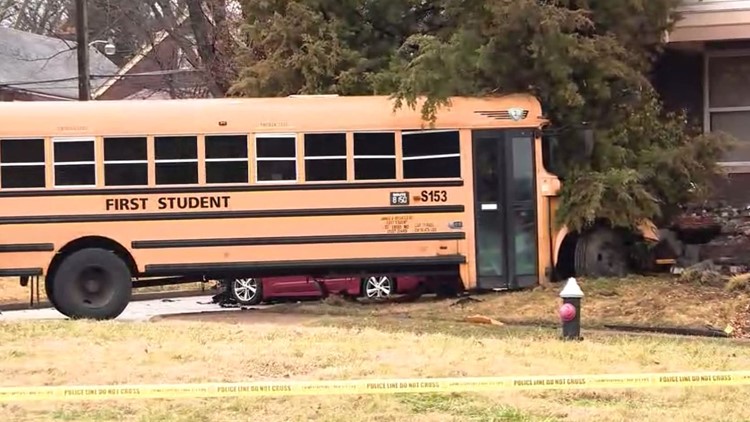 ST. LOUIS — An investigation is underway after a car crashed into a school bus Friday afternoon in north St. Louis.

Officers responded to Leonora Avenue and Floy Avenue around 2:35 p.m. for a call of shots being fired and an accident with injuries.

Police said a 19-year-old woman and 22-year-old man were in the woman's car when a grey or silver SUV pulled alongside the car and started firing shots.

The victims fled the area and when they reached the intersection of Leonora and Floy, their car struck the school bus.

Police initially said the woman was shot in the leg but as they investigated, it was determined that she wasn't shot. She broke her leg in the accident and the man suffered a broken arm in the accident.

Both of them were taken to the hospital for treatment. Another adult patient was also transported with a gunshot wound.

Eight children were on board the KIPP Triumph Academy school bus and none were injured by gunfire, a St. Louis Metropolitan Police Department spokesperson said.

Three children were evaluated for minor injuries due to the crash, but their guardians refused transport. The bus driver injured her chin during the crash.

All parents were notified of the incident, a school spokesperson said.

I want to let you know about an incident that occurred this afternoon.

On the way home from school, KIPP Triumph Academy bus number 8150 was involved in an accident. There were several students on board at the time. The accident was reported to First Student, school administrators, and the police. As soon as the school was informed, KIPP staff went to the location of the accident. The accident involved gunshots fired near the bus. Thankfully, no KIPP scholars were injured.

We are happy to report that all of the students on board the bus were evaluated by paramedics, and were sent home with family members.

The response to this incident was a true team effort. I want to express gratitude to those involved, including the bus driver who ensured our students were safe.

As always, we put the safety of our students first. We are very glad that all of our scholars are safe following this accident.

Editor's note: Officials originally reported there were 13 children on the bus.

RELATED: Winterfest in downtown St. Louis closed due to weather