A few months ago, Shevchenko said he was approached by one of his students who drives for a rideshare company about learning some moves she could use while driving

ST. LOUIS — Self-defense coach Artem Shevchenko said there's one idea he always teaches his students, regardless of the setting.

“As the attack, so the response," Shevchenko said. "For every action, there’s an equal and opposite reaction. Your actions are actually unlimited.”

However, for many, he said the physical responses of defense don't come naturally to most people. He said they typically have to be taught and practiced until they become habit.

A few months ago, Shevchenko said he was approached by one of his students who drives for a rideshare company about learning some moves she could use if she were to be attacked behind the wheel.

"I saw that there was a need, and it wasn’t being filled," Shevchenko said.

He taught his first self-defense class specifically tailored to situations that could occur in a car to a small group of Uber and Lyft drivers. Since that initial class, he said he's been contacted by many more who say they would feel safer doing the job if they felt equipped to respond if they were attacked.

"A car is close quarters," Shevchenko said. "You don’t have much room to move but you still have room to move.”

For one woman, who asked 5 On Your Side not to share her name, the ability to move is what drew her to drive for a living in the first place. She suffers from multiple sclerosis, and she said being behind the wheel gives her a level of normalcy and freedom she would not get in a traditional job setting.

"When I drive, I feel so balanced and more in control," she said. "I don't have to be up irritating my legs and back."

While she said she has many good, funny stories about rides with various passengers, she admits they aren't always positive. Recently, she said she was driving a group of people from St. Charles to a bar in downtown St. Louis when a man sitting in her passenger seat got aggressive because he thought the company's GPS system was sending the driver on a longer route.

"He just reached with his hand," she said.

The driver said the man, who she said was built like a football player, was "thrashing around" in his seat so much she was shocked the seat belt didn't break. She also said he reached for her steering wheel multiple times.

“I poked him in the hand and shoved his hand back," she said.

The driver told 5 On Your Side she has felt unsafe while driving multiple times.

"It makes me so nervous when someone is sitting directly behind me," she said. "So nervous. So scared someone is going to come up behind me and choke me or put a gun to my head. I don’t particularly like the passenger seat, but I would rather have them in the passenger seat if they choose than right behind me. That scares the heck out of me."

While she said she has her concerns as a driver, she also said safety risks also exist for passengers.

“If a driver wanted to…unfortunately, I mean…they’re driving," she said. "The passenger has no control over where the car goes.”

Last month 30-year-old Cristen Giangarra sued Lyft after she said she was kidnapped and raped by her Lyft driver, Larry Ward.

RELATED: 'He was on top of me and he smiled' | Woman says Lyft driver raped her in St. Louis, files lawsuit

Giangarra's attorney told 5 On Your Side his firm has multiple clients in this area with cases like hers.

5 On Your Side reached out to St. Louis police and St. Louis County police and asked each department to search their call logs using the keywords "Uber" and "Lyft".

City police records showed more than 400 calls from 2015 through the end of 2019. Nearly 25% of the calls were for either rape, sodomy, kidnapping, assault or sexual assault.

County police records showed about 300 calls with a dozen for assault or sexual assault.

A majority of the calls for both city and county involved theft.

Both departments told 5 On Your Side that the calls don't always necessarily involve an interaction between a driver and a passenger. However, St. Louis police detectives confirmed both Uber and Lyft "always cooperate" with investigations.

In 2017, the Missouri legislature passed a series of laws concerning rideshare companies. One of the laws allows for law enforcement from a city with more than 400,000 people that covers multiple counties or a regional taxicab commission to conduct audits of the companies twice a year. Kansas City is the only city in Missouri that fits the requirement, meaning the St. Louis Taxicab Commission only has the ability to request records to do proactive regulations. However, Chuck Billings, the commission's attorney said it isn't that simple.

The law allows for the commission to review 10 anonymous vehicle files selected by the rideshare company.

"Uber or Lyft would pick out the 10 vehicles to be audited," Billings said. "Even if we found a violation, there's nothing the taxicab commission can do to change anything."

The law only allows the commission to charge the companies $500 for each violation.

5 On Your Side selected 10 specific cases, involving rape or sexual assault, to review from the list of calls from St. Louis Police. All but one of them are still open investigations, so no details other than time and location were available. A majority of the cases occurred downtown near a bar, at night.

The one case with available details involved a woman who said she was raped by a man who she met out at a bar, not a rideshare driver.

In a statement, an Uber spokesperson said:

"Safety is essential to Uber and we’ve been putting safety at the core of everything we do. We have strengthened our screening process in the U.S. with continuous checking technology and added safety features to our app, including an emergency button for riders and drivers. Uber is constantly working to raise the bar and help make our communities safe.”

The company self-reported and released its own safety report, including data on sexual assaults committed against both drivers and riders late last year. Around that time, the company announced new safety features to the app, a new emergency button and continuous checking to help the screening process.

Uber also has a number of safety tips, resources and information on its website.

While Lyft did not respond to a request for a statement on this story, the company also offers a number of resources for drivers and riders on its site.

Additionally, Lyft confirmed to 5 On Your Side that Larry Ward was fired following Giangarra's accusation which is in compliance with Missouri law.

The driver spoke with 5 On Your Side said she plans to drive for Uber and Lyft for the foreseeable because it works best for her condition, though she has concerns both companies could do more to be proactive about potential dangers for riders and passengers.

"I almost think they should do psychiatric tests," she said. 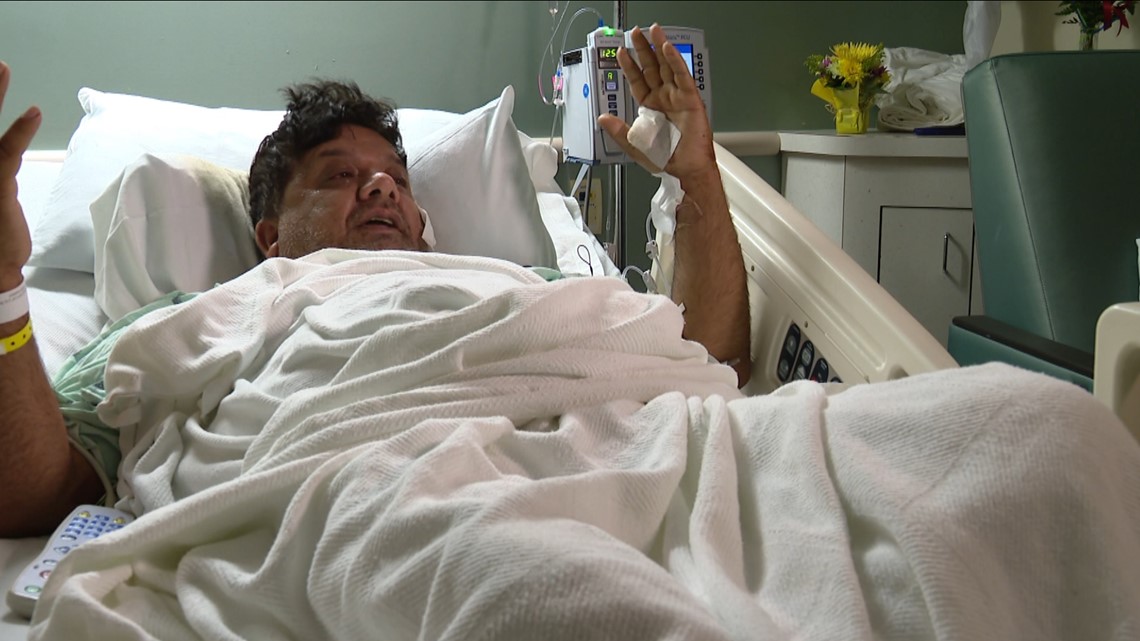 'She had a knife. I had nothing.' | Cab driver survives being stabbed 13 times
ST. LOUIS COUNTY, Mo. - Covered in bandages, Inam "Sunny" Allah lies in a south St. Louis County hospital with 13 stabs wounds scattered across his shoulders, hand and face. "She had a knife. I had nothing," Allah, 48, said of the Tuesday night attack. Allah said he picked up a woman around 9 p.m.

RELATED: ‘I had to learn to hold my son all over again’ | Amazon driver shot over parking spot is proving doctors wrong