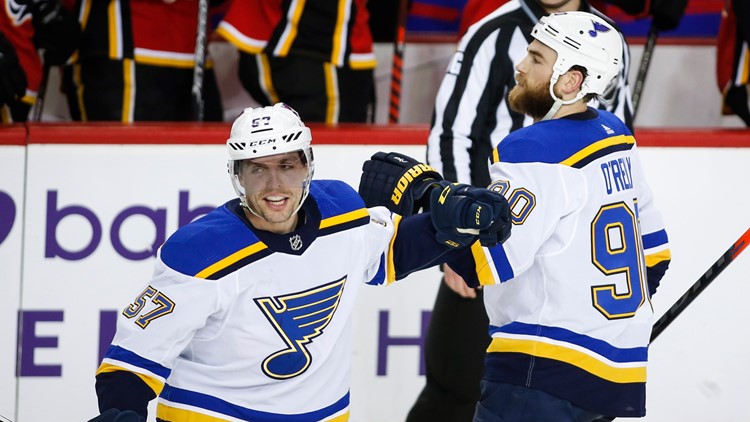 ST. LOUIS — The Blues will make two lineup changes when they close out a three-game homestand today against the Dallas Stars (7 p.m.; FS-MW, ESPN 101.1-FM).

Mackenzie MacEachern will replace Jordan Kyrou and play for just the second time in the past seven games, and Jacob de la Rose, a healthy scratch the past three games, will replace Troy Brouwer to give the Blues' fourth line a different look tonight.

De la Rose has nine points (two goals, seven assists) in 47 games this season, including five points (one goal, four assists) in 31 games with the Blues after being acquired from the Detroit Red Wings for Robby Fabbri on Nov. 6.

"He's been out for a bit and I'm hoping he can come in and give us some good energy and use his big body tonight," Blues coach Craig Berube said. This is a physical team over there, a good-sized team. He's going to be an important player for us tonight."

MacEachern, who sustained a lower-body injury Nov. 19 against the Colorado Avalanche when someone awkwardly fell on his leg, will also add a bigger, more physical element against a bigger Stars group.

"It's exciting," MacEachern said. "Definitely a big game against a big division team, so Saturday night, St. Louis, can't beat that for sure. It'll be a tight-checking game, probably 3-2, 2-1 type game. It'll be fun, a playoff-type of game.

"That kind of bodes well for me, kind of my style. I think Dallas kind of plays similar to the style that I like to play. It'll be a fun game for sure."

"Same team. They're a good team," Berube said. "They're strong from the goaltender, back end out. That's how they're built. Solid goaltending, both of them. Their defensive corps is solid with [John] Klingberg and [Miro] Heiskanen back there. They're as good as anybody at transporting the puck up the ice and getting up the rush. They've got a good group of forwards that have good size and they're fast."

Defending as a five-man unit will be imperative.

"Yes, and getting on the forecheck eliminating them, getting on top of them, slowing them down," Berube said. "Being physical on them is going to be really important."

The Stars are playing the second of back-to-back with travel after blowing a 2-0 lead in a 3-2 loss on home ice against the Minnesota Wild, who scored with 25.8 seconds remaining in regulation to get the win.

The Blues hope to get off to a good start.

"A good start. We always want to be off to a good start though," Berube said. "They traveled and played last night. It's just about getting to our game as early as possible here tonight. That's going to be important."

Sundqvist has missed the past five games.

As far as being close to returning, the news didn't sound encouraging.

The Blues are 27-9-8 with Sundqvist in the lineup, 5-6-0 without him, so pretty telling missing a key defensive forward with a flare for some offensive pop.

Anton Khudobin will start in goal; Ben Bishop will be the backup.