Already a Stanley Cup champ, Parayko entering prime of career and only getting better

At 26 years old, to say the sky's the limit would be an understatement. 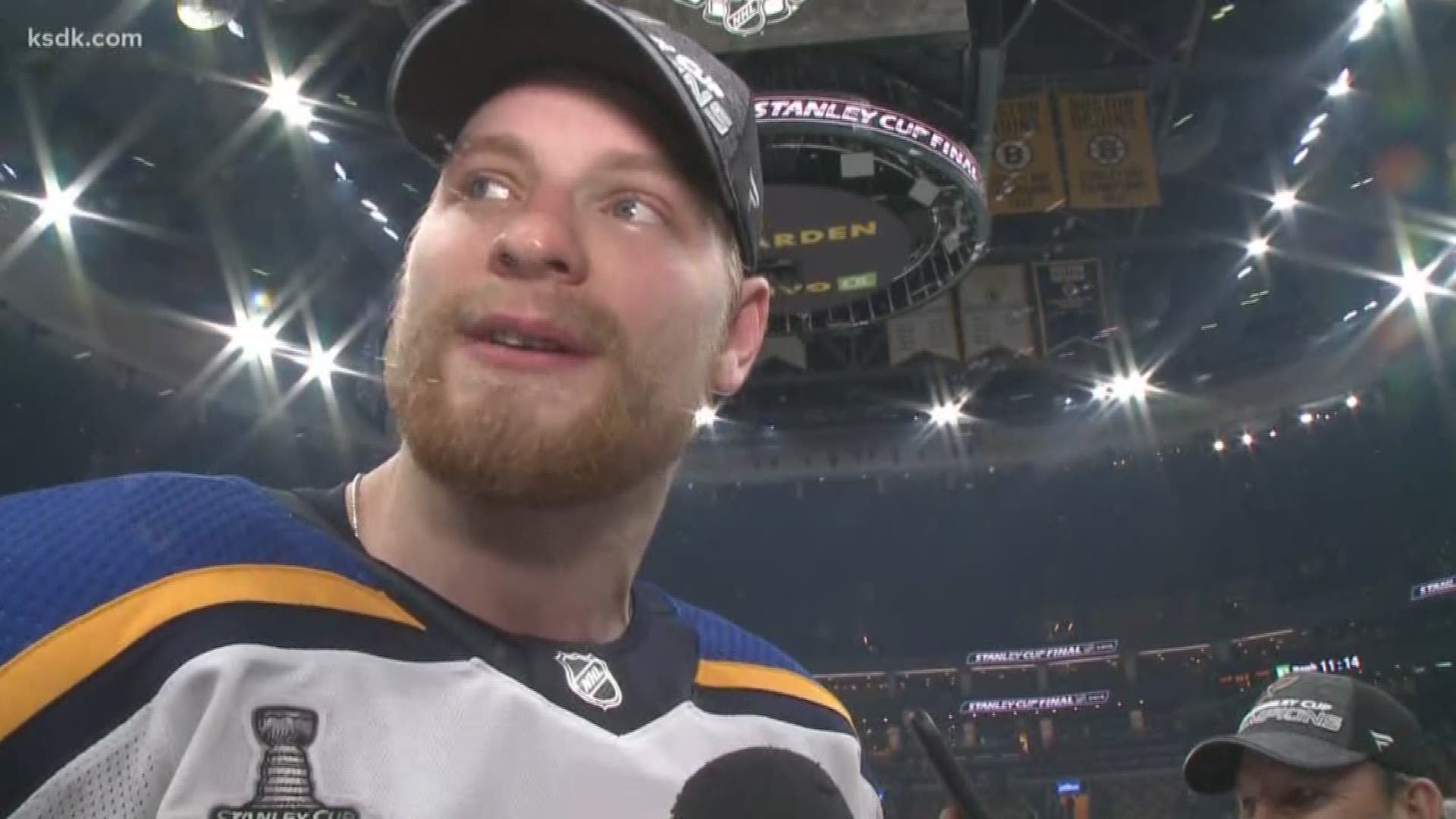 MARYLAND HEIGHTS, Mo. — One year ago, life for Blues defenseman Colton Parayko was focused on things he couldn't really control.

Parayko was at times answering questions about his future with the organization. Rumors were bandied around of the possibility the Blues would move their third-round pick in 2012, and after that disastrous start to the season when the Blues found themselves last in the NHL overall on Jan. 3, heck, everyone was supposedly on the chopping block.

What a difference a year — or in this case — six months makes, because heading into training camp for the 2019-20 season, Parayko is a Stanley Cup champion, one who had a huge impact on the Blues' success in what was an improbable run to their first-ever championship. And now, rather than talk about trade, the chatter about Parayko is if he's capable of being in the conversation as one of the up-and-coming defensemen who has the potential of being one of the elite blue liners in the game.

But true to his character, Parayko is very good at throwing a slice of humble pie at those accolades. It's who he is.

"I don't know. I don't really think that way," Parayko said. "I just go out there and focus on playing my game, focusing on making sure that I give myself the best game and the best chance for our team to win."

At 26, Parayko is entering the prime of his NHL career, and to say the sky's the limit would be an understatement. Of course he's getting noticed. Kind of hard to miss a 6-foot-6, 230-pound mass coming your way, especially when it's on skates and coming in like a freight train.

But when you're a shutdown force at the game's biggest stage, you're noticed on all corners of the Earth.

"I think obviously as the year went on and the playoffs came along, obviously there's more media there, there's more TV, they kind of zoom in on you," Parayko said. "I feel like once we got to the playoffs, you've just obviously got to give it your all and that's what I was doing, trying to help our team as much as possible. I give it my all every game."

Craig Berbube once said facing Parayko and partner Jay Bouwmeester was like going through a car wash on the ice. Nothing seemed to get through them, and that's why the Blues' coach would tap the duo's shoulders quite regularly as his shutdown pair.

"We put them together there and they just became a real good shutdown pair there, two big guys that have great sticks, both can skate, play the whole game pretty much and they just go out there and do their thing," Berube said. "It's been a good pairing for them guys for sure."

"They're so big," Blues defenseman Vince Dunn said. "They take up a whole zone, just those two players. That definitely helps them. The way they skate and the way they're connected on the ice. They're able to close guys out and shut plays down really quickly."

"We're both big, we both have big sticks," Parayko said, adding with a grin that, "it's kind of like window washers, window wipers going.

"Seriously, we try to make sure that we stay tight, stay tight defensively, not allowing them to gain our zone. We both just try to stay tight in the offensive zone, and if we can do that, then it's tough to kind of gain any ice on us."

Parayko was 37th in the NHL in time on ice during the regular season at 22 minutes 47 seconds, but his time jumped way up to 25:07 (good for 15th among playoff D-men) in the postseason. It's easy to figure out why, since he and Bouwmeester put on their best Blue Iguana imitation and were tidy car washers against the opponents' top horses. Among them were Mark Scheifele, Blake Wheeler and Kyle Connor of the Winnipeg Jets, Jamie Benn, Tyler Seguin and Alexander Radulov of the Dallas Stars, Logan Couture, Joe Pavelski and Timo Meier of the San Jose Sharks and Patrice Bergeron, Brad Marchand and David Pastrnak of the Boston Bruins.

RELATED: Blues turn the page on championship season, ready to prove themselves again

There was no rhyme nor reason for their success. But the Blues rode the pair and success seemed contagious and Bouwmeester's mentorship seemed to rub off on Parayko and the pair continued to click.

"I think really since he came in that first year, we've never really played together for a prolonged period of time. At different times we got put together, and I always enjoyed playing with him. I always thought we could help each other out," the 35-year-old Bouwmeester said. Personally I like him. We have some things in common - we're from the same area and I've gotten along with him real well since Day 1. But yeah, just getting a chance to play together, really. I think it was kind of good timing because when we got put together, the team was starting to turn the corner, and a lot of guys' games started to change at that time. I don't know, for me, I'm at the stage of my career if I can help a younger guy and kind of share some of my experiences, I'm more than happy to do that, and for a guy like him, who ... I don't know if you say so much potential because I think people have seen all the potential ... he is what he is now ... he's a, I think, pretty premier defenseman in this league. If you can help him any way he can, in turn that helps the team."

Parayko has always been a smooth skater, almost doing it effortlessly, kind of like Bouwmeester's strength of using his skating as an advantage. Parayko always seems to be able to skate with the puck out of a phone booth, make good decisions with it and has a booming shot that is sometimes erratic, but when he gets that booming clapper of his on net, it can be dangerous. Just ask Stars goalie and St. Louis' own Ben Bishop.

"Obviously he's got a good shot," Bouwmeester said. "He probably one-ups me on that one."

RELATED: 'One is not enough': Blues back at practice hungry for more

Come to think of it, who wouldn't want Parayko on their team? Probably one of the biggest reasons why his name was thrown out in trade rumors is because he comes with very reasonable cap hit ($5.5 million) that runs through the 2021-22 season. When the Blues locked Parayko up to a five-year, $27.5 million contract literally right before he was to have his arbitration hearing in Toronto on July 20, 2017, it was considered a risky investment on a player they hoped would pan out.

Parayko has done more than just pan out, and the contract now looks like a steal.

But that doesn't mean Parayko won't continue to work on his craft and be content. He was in St. Louis in August ready to hit the ice despite the short summer, which included getting the chance to take the Cup to his hometown.

"It's still a lot of off-season. When I got here this summer, I got here in mid-August and I stepped on the ice and I'm all ready to go," Parayko said. "It might sound weird, but I think that's how a lot of us feel. We're ready to go. We're excited for what's coming. We have challenges here to continue to be good and obviously get in the playoffs again and make another deep run and hopefully win. I think we're ready.

"There's different areas, there's always areas you can improve on. Just continue to get better in all the little areas. My puck work, my first pass out of the zone, skating and just trying to make the right play offensively, keeping it simple. Just continue to get better in all aspects. I think I can always work on things. As the season progresses, you get put in different positions, different scenarios, so just making sure that I come prepared for all those and keep looking forward."

Will Parayko ever put himself in that class of Norris Trophy winners? It'll be hard to do that without gaudy offensive numbers that some (Brent Burns and Erik Karlsson, for example) put up. But to call him an up-and-comer? Not within those locker room walls. Not with Parayko's teammates.

"I wouldn't say it was a breakout (year). He's always been capable of doing the things he does," Bouwmeester said. "I think he's been a pretty consistent player throughout his career, but I think when you go through (playoff) runs like that, there's just more exposure, so your whole team gets more recognition, or people see you. We're not a Toronto or a team where all the media types are watching every night. That's kind of prime-time. Sometimes our guys kind of fly under the radar a little bit. Just that exposure, I think for a guy like him, is giving him the credit that he deserves."

And having a potential Hall of Famer by his side, the ride has been seamless.

"We just took it and we ran with it. We knew what we were up against," said Parayko, whose only missed six games in his four seasons. "Obviously Jay 'Bouw' is one of the smartest, if not the smartest guys out there to play with. As his partner, life on me is easy just the way that he plays, how he skates and how moves the puck, the way he defends. For me, I'm just trying to make it easy on him as well. I think we work well together. We're big, we have long sticks, making it tough on opponents to try and get into the zone. We hope we can stop them before they can cross our blue line. He's just a smart player that has been around for so long. He knows the game so well. He always seems to be making the right play. He always moves the puck really well and get the puck into the forwards' hands. Once you do that, it kind of allows us to jump into the play, move up the ice. Everything about him just makes everything easy to play with him."

RELATED: Frank's Food for Thought | 'O’Reilly has a chance to go down as one of the most revered hockey figures in our town'

RELATED: The Stanley Cup officially has the Blues’ names on it!

RELATED: For the Blues, it's time to park history, get re-motivated for Cup defense