'Never give up on your dreams': 3-time champion Pat Maroon shares Stanley Cup with hometown of Oakville

"There's always an opportunity for you. It doesn't matter how old you are... Never give up on your dreams because your dreams are always waiting for you." 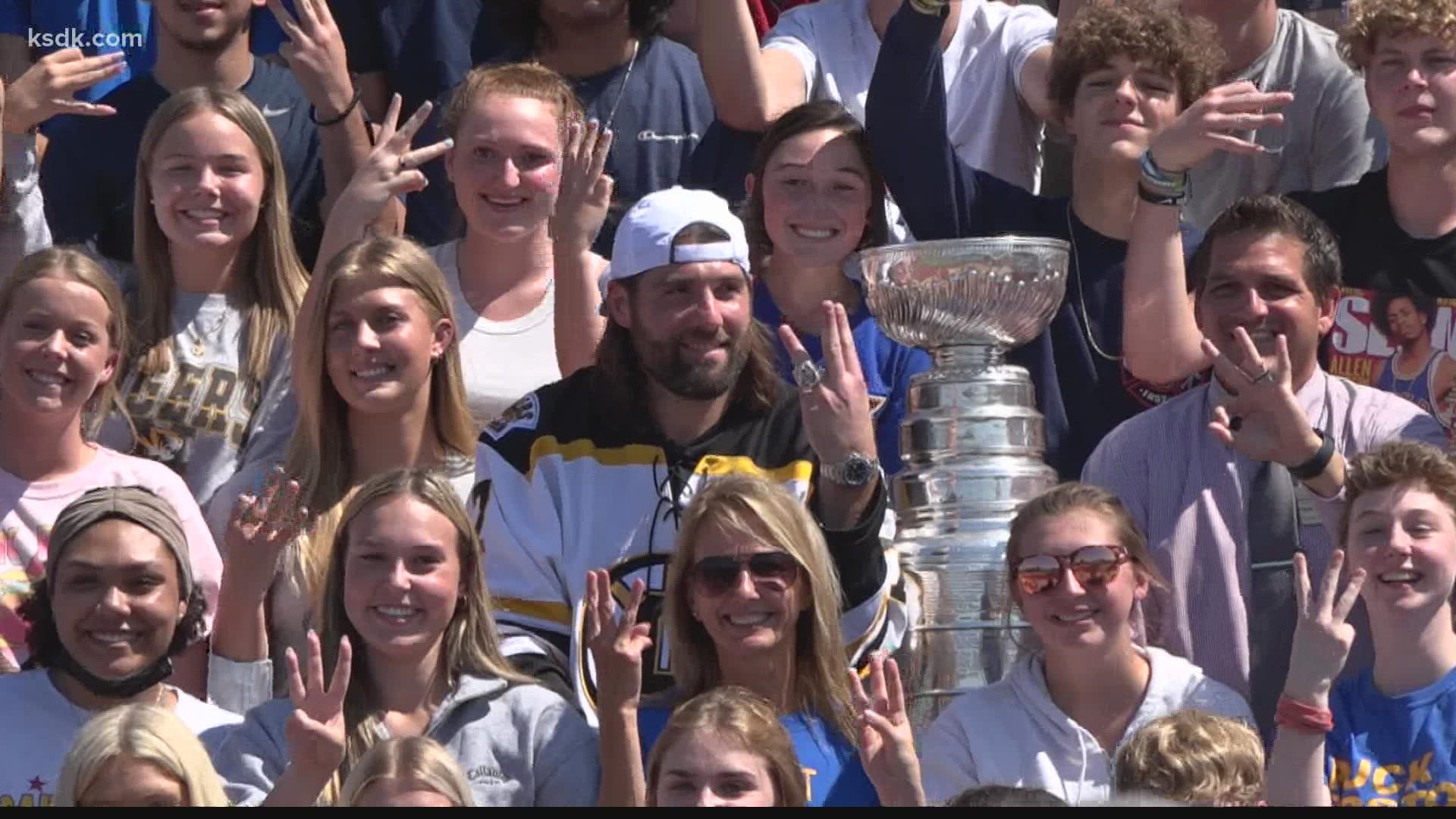 OAKVILLE, Mo. — The hometown hero was true to his namesake on Wednesday. The prodigal son returned to Oakville, and he brought the greatest trophy in sports along with him.

Tampa Bay Lightning forward Pat Maroon is now a 3-time Cup champion: Twice in Tampa, and with his hometown Blues in 2019. For his day with the Cup following the Lightning's 2021 title, he knew he had to bring it to his people in Oakville.

"I didn't take it to Oakville the first time around since we won in St. Louis and I felt like everyone got an opportunity to see it. And I said If I won it again I'd bring it back to Oakville High School and the community," Maroon said.

Maroon didn't get the chance to bring the Cup home after the 2020 title, as players didn't get their standard day with the trophy because of COVID.

But the wait only made it sweeter.

"It never gets old. It gets better every time," Pat's mom, Patti, said.

"I'm very proud of my son. He did an outstanding job winning it three years in a row, we're really happy for him," Pat's dad, Phil, said.

Maroon's hockey dreams were cultivated at Oakville. And walking the halls again brought back a lot of memories.

"As a young kid you dream about playing in the NHL. To win a Stanley Cup is on a different level, but walking through the hallways... I always told myself maybe one day you can play in the NHL. I used to tell my math teacher all the time when I'd be waking up from naps haha," Maroon said.

"His teacher always told him, and he was convinced he was going to the NHL, and she told him, 'When you make it, you better give back. You keep some but you always give back.' And maybe some of that stuck in his head, and I'm proud of him for that," Patti said.

Oakville High School showed up on Wednesday with the entire student body coming out for a pep rally at the football field complete with a band, school Hall of Fame plaque for Pat and a message from the NHL champion once in the same shoes of all the kids in the stands.

"The inspiration part is never give up. Sitting in your classroom, a kid from Oakville High School didn't know what his dreams were at the time, all I knew is I wanted to play in the NHL and obviously it was a lot of work and dedication and preparation. These kids... just never give up," Maroon said. "There's always an opportunity for you. It doesn't matter how old you are. It could start in the classroom today or in college or after college. Never give up on you dreams because your dreams are always waiting for you, you just never know when you're going to accomplish it."

Maroon also took the Stanley Cup on a trip down Telegraph Road, hitting up local bars and letting the community join in his celebration. It's a celebration he's gotten pretty good at by now. But where does he get those party skills from?

Maroon will be back on the ice for the Lightning in just a few weeks, and with a loaded roster returning, it wouldn't be shocking for him or his family to see the Stanley Cup back in 12 months or so for another hometown tour.