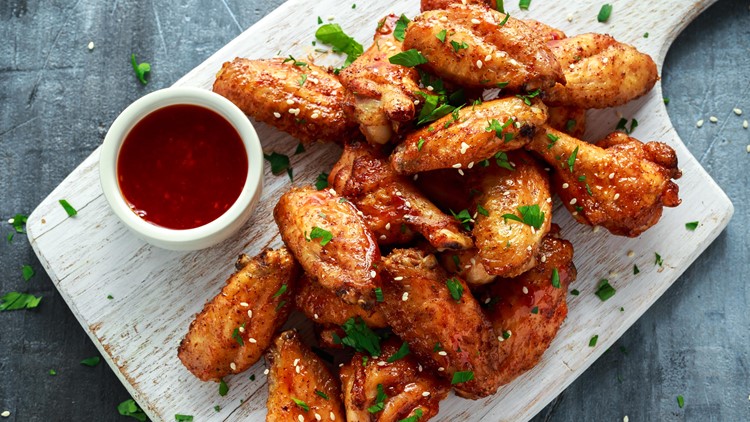 Your guide to the best wings in the St. Louis area

ST. LOUIS — Who doesn’t love wings? Whether they’re hot, barbecue or any other flavor – wings are a must-have, especially in the summer.

We wanted to know where you could find the best wings in the St. Louis area. So, we asked our Facebook followers to give us some suggestions and this is what they came up with.

Sybergs is a St. Louis favorite for their wings so it was so surprise that the restaurant received the most votes on our Facebook page!

Sybergs is a family owned business that began in 1980, and they have seven locations. It’s a place where you can grab a beer and watch the game or have a family dinner.

The restaurant uses a variety of sauces for its wings, but you can’t beat the restaurant’s original famous sauce. You can even buy the sauce at grocery stores – it’s that good!

Sybergs offers a variety of dishes in addition to wings.

You can get pizza, sandwiches, salads and a list of appetizers that includes shark bites!

Click here for more information on locations, hours and the menu.

RELATED: ‘No other place is even close’: Best doughnut shops in St. Louis

“Poor Richards and the Mark special is the best!” said Becky Laumand.

On its website, the restaurant claims it is best known for its “amazing wings.”

“Poor Richard's Restaurant & Sports Club is the perfect combination of a family-friendly dining establishment and a place for friends and colleagues to gather for a drink and watch their favorite game.”

The restaurant has an appetizer menu, main menu and catering menu.

In addition to wings, you can get loaded nachos, Bavarian pretzels, potato skins, etc. The restaurant also serves up burgers, salads, sandwiches and more!

Click here for more information on locations, hours and the menu.

RELATED: Where to find the best barbecue in St. Louis

Even though Kretzer’s Grill & Bar isn’t in St. Louis, the restaurant received so many votes that we had to include it in the list!

The restaurant is located about an hour away from St. Louis. It is famous for its all-you-can-eat crab legs and fried chicken, according to its Facebook page.

“Kretzer’s Bar and Grill in Hoyleton IL. It’s a very little town but the wings are to die for!!!!” said Angela Quandt Schnake.

You can view their full menu on their Facebook page. It includes appetizers, pizza, salads, burgers, sandwiches and a list of other entrees. It also includes a beer and cocktail list.

RELATED: Grab a slice, or 4, at these local pizza spots

Next to make our list is The Locker Room in Florissant. According to its Facebook page, the bar and grill has been a north county tradition since 1979.

“The Locker Room in Florissant has some pretty great wings,” said Danielle Bayer.

According to its Facebook page, part of the bar is a piece of St. Louis history – it was brought in from the Lemp Mansion.

“This thing is as much a part of the place as the ground it sits on.”

RELATED: Your guide to the best gooey butter cake in St. Louis

According to its website, it is well known for serving up the best wings in St. Louis.

Mulligans has a full menu that includes several appetizers, salads, soups, sandwiches and other entrees.  And since its name is Mulligans… everything is golf themed.

Appetizers = The Practice Round

Soup = In the Trap

You can find the wings in the ‘Club House Specials’ section. You can get Short Game, Best Shot or Even Better Shot.

Click here for more information, hours and a look at the menu!

RELATED: Get ready for summer with this list of best snow cone shops in town