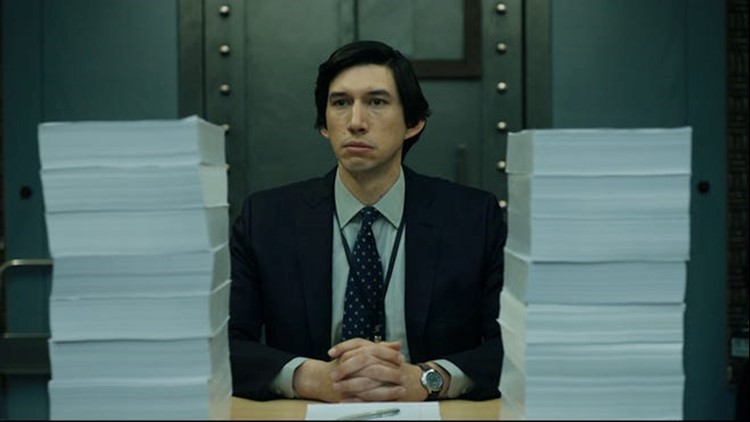 ST. LOUIS — Sometimes, living in the past is a good thing.

For FBI investigator Daniel Jones (Adam Driver), it was paramount to understanding what exactly happened after 9/11 with regards to the United States of America's response. Essentially, how awful did the CIA break bad in their interrogation methods with would-be suspects in the terrorist attack?

Scott Z. Burns has created an important and quite potent film with "The Report," because it's diabolical in the sense that it seeks attention in the storytelling sense and not in a "look at me" box office manner. He's getting at something, a practice that only gathers more stains as we near two decades since the worst terrorist attack on United States soil. As bad as that Tuesday was, did what happened next actually turn out to be worse?

You'll definitely feel every keyboard stroke, paper trail, and vital detail that Burns put into the script and efforts to direct. We watch Jones go from Harvard renegade to the office of future Obama Chief of Staff Denis McDonough, to working for the FBI, to being summoned by Senator Dianne Feinstein (Annette Bening) to take a thorough look at the CIA's ETI methods.

I'll warn you. "The Report" will most likely make you mad-but in a good way, one that empowers you to never take what CNN tells you without adding three grains of salt to it. Jones constantly runs into officials like CIA Director John Brennan (the great Ted Levine) or other CIA stiffs like Thomas Eastman (Michael C. Hall of "Dexter" fame) telling him that he is doing a disservice to hard-working heroes who sought out justice for 9/11. In one of the film's most potent scenes, Jones points out that this isn't an episode of Fox's "24" where Jack Bauer can just torture the truth out of someone and seize the day.

In the real world, vengeance and justice don't live in the same house, and nor should they ever. It's quiet scenes like the aforementioned dialogue sequence that make "The Report" so good. In other hands, it could have gotten hammy, over-the-top, and completely dramatic-but in Burns' quarters here, it's just like sitting in on a board meeting where not only the fate of the world is being thrown around, but how people will look back on the history of our country.

It's all about how you react, and this movie makes it painfully evident that certain people in power acted wrongly. Like "Vice" and other politically viral films, this one will not sit well with Republicans-because it doesn't play to either side of the Washington party system. It just tells the story straight up. Trust me, when we only got 500 pages of a 7,000-page report that took six years to build up, you should know Burns has plenty of ground to play on.

The cast is uniformly excellent, but this is Driver's car to drive. He's diabolical in his portrayal of a quiet and resilient truth-seeker, someone who let their brain and hands do the talking instead of their reputation. In a sea of egos, he stood out, and Driver nails the role. He's quickly becoming a versatile performer in the world of movies, and a triple threat this year with this film, "Marriage Story," and the much-hyped "Star Wars: Rise of the Skywalker" rounding out the year. With a thousand-mile stare and a swimmer-type stature coupled with a voice that can slowly build like a Soprano, Driver is the real deal.

Bening is great as Feinstein, someone who refused to give in and kept the faith in her number-crunching disciple Jones. Hamm is a perfect fit as a play-by-the-rules "we are the good guys" Washington stiff who caught Jones early on, but let the young man mold himself into a true threat to the corrupt methods of the government. Maura Tierney, Corey Stoll, Matthew Rhys, Dominic Furmusa ("Homeland"), and Sarah Goldberg all give something extra to their small yet crucial roles.

This film fits into the realm of "All The President's Men" and "Spotlight," films that paid a price in party favoring in order to tell the right story and be brutally honest. Burns could have laid back and take less shots at a criminally remote practice, but instead, he leaned into it completely. When the good guys act like bad guys because they got defeated, someone needs to speak up.

Daniel Jones started the charge, and Burns does his story justice here. Sometimes, living in the past can be a good thing ... because it helps you ensure the future will be better.

"The Report" isn't the easiest watch, but it's a very important one you should make time for.