Ric Roman Waugh's film was better than it needed to be for an end of the world genre entry, giving audiences a well-crafted thriller and award season escape.

ST. LOUIS — 66 million years ago, a comet supposedly hit Earth and wiped everything out. I would tell you all about it, but I wouldn't exactly find a reliable source. Scientists have theorized for a long time that if a comet was headed for Earth, there would be a warning sent out less than six months before it happened.

We all think about it, right? What if that tornado, tsunami, or terrible act of Mother Nature just stopped all clocks? But imagine being destroyed by leftovers. In other words, the solar system's leftovers, or a comet.

That's what John Garrity (Gerald Butler) and his family have to face in "Greenland," Ric Roman Waugh's end of the world thriller. Right when he moves back into his house and tries to reconnect with his estranged wife, Allison (Morena Baccarin), things start to go very bad for the Garrity's in the form of Clarke, the big old comet separating amid its descent to Earth.

Ladies and gents, there's nothing like a good popcorn thriller right in the middle of Oscar season. It's like finding the hidden chocolate bar under the table during an expensive dinner party. Imagine John McClane walking up to you and just saying, "hey, come on over, have a few drinks and a few laughs, and turn your brain off for a couple hours." The truth is "Greenland" is a lot better than it needed to be, more compact than the usual entry from this genre. Chris Sparling's script has just enough bone density to give Waugh's film a brain, and increase the stakes every 10-15 minutes.

This movie is highly entertaining and involving, which is impressive given a setup that we all know by heart. The semi-broken family trying to heal and lick their wounds while escaping the end of days. Along with John and Allison's crumbling marriage, their son, Nathan (Roger Dale Floyd) has asthma, which you bet will come into play as the family races across the world for sanctuary. But it's all about the way Waugh and Sparling use those familiar colors to ratchet up the tension and believe me, this is a very suspenseful film. This is one of those movies where you'll be shouting at the flat screen while you admire the ridiculously groomed sharpness of Butler's facial hair.

All movie beard jokes aside, the Scottish movie star is an under-appreciated asset in Hollywood. There's one reason why I could pitch a script called "Iowa Has Fallen," and Butler could make it a hit in a pandemic. Most still confuse an action star with an actor, like they want Vin Diesel to give an Oscar-worthy monologue while flying his car through the air. It's all about presence, comfort, and a believability that when things go bad, we'd follow this guy through the dark forest. But Butler does bring some acting pedigree to the table. It's the reason why "Machine Gun Preacher," "Chasing Mavericks," and "Rocknrolla" all had a little something extra. Why "Den of Thieves" was a lovely red meat version of "Heat." He gives John Garrity just enough world-weary fatigue while enduring him with a "get it done" mentality. It's nothing extra special, just a reliable action presence with some depth. It's not a 100% stoic hero role, which was refreshing.

Baccarin, who most entertainment fans will still notice as the unassuming wife in "Homeland" and the always-in-trouble girlfriend of Ryan Reynolds' "Deadpool," but here, she gets a lot of chances to show off some thriller skill work. The family inevitably gets separated and each gets into their own adventure, and Baccarin really digs into the role of this resourceful woman trying to save her marriage while desperately trying to survive. Like Butler, she gives it something more. Floyd is also good here, giving a performance that doesn't just come off as cute, sad, and innocent. A few signature scenes get their tension all from the little things that Floyd does, especially in a scene involving a couple played by David Denman and Hope Davis.

They are just one landmine on the Garrity cross-world survival of the fittest trip. "Greenland" is populated with small yet potent character actor spotlights, including a very good as usual Scott Glenn as the battle-tested grandpa, and Holt McCallany in a key late role in the film. Everyone does their part to keep the movie moving swiftly while making an emotional dent. An early scene has John and company being "selected" for rescue, and you quickly see the collapse of humanity in the face of certain doom as their neighbors aggressively try to pile into their car. It's not a gimmick, but a very intense moment in a commercial film.

The special effects are another highlight here, with the explosions and world destruction coming through in vivid detail. I've always appreciated the effects that blend CGI with practical location action. A scene where John drives in reverse down a crowded highway carries the same impact as a large plane exploding. A car chase through a crowded country road gets amplified by the effects here, where Waugh and company keep the action snugly located at the intersection of "no way" and "NO!!"

We shouldn't be too surprised by the director's ability to contain the genre's stipulations and add his own flavor at the same time. "Shot Caller" proved that Waugh knows how to tell a real human story. He takes that touch and adds it to the palette here, with above average results.

Bottom Line: A commercial film that constantly entertained me. "Greenland" has a capable cast and story with some unique directorial choices. An equal bag of thrills and real world stakes with a relentless pace, I was dialed in right up until the very last scene. If "The Midnight Sky" was too slow and sad for you, check this film out right as 2020 is entering the red zone.

Hey, at least a crashing comet hasn't been added to the 2020 dogpile yet, right? 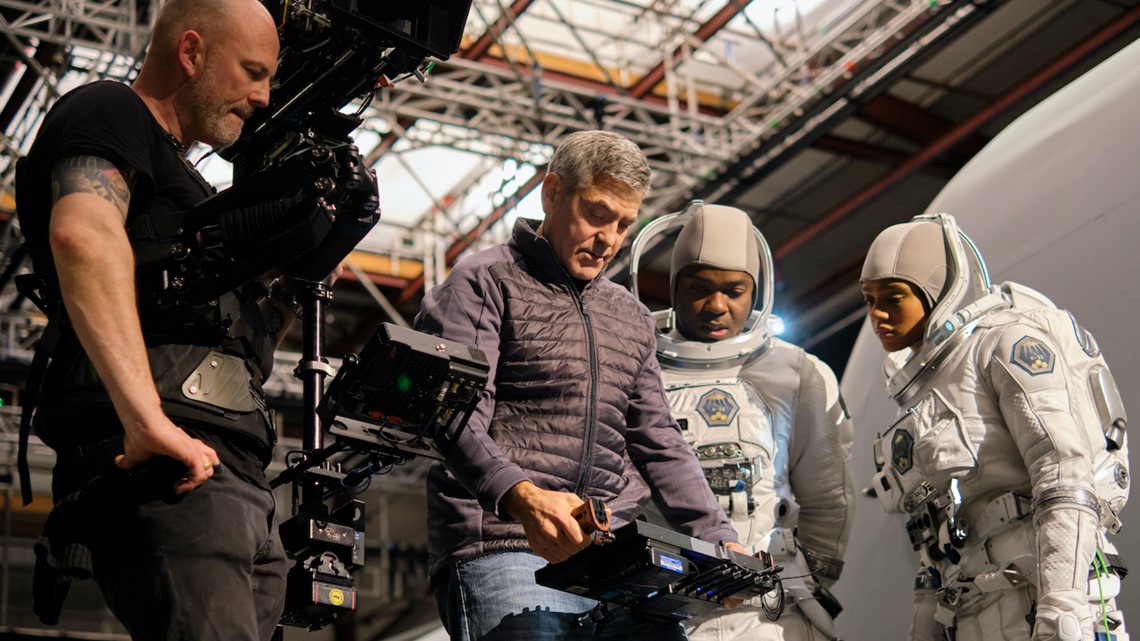 'The Midnight Sky' Interview | How George Clooney made a movie about connection before the pandemic
KSDK spoke with Clooney-as well as co-stars David Oyelowo, Demian Bichir, and Caoilinn Spingall-about making the timely Netflix film. ST. LOUIS - Connection is everything in life, especially on a film set. The connection between a cast and crew, between an actor and a director, and most importantly, between the audience and the film.