Sorkin's film pushes all the right buttons, boasting a classic script and a dynamite cast. Read what our film critic had to say about this new release.

ST. LOUIS — Powerful filmmaking comes in many forms in the world of film, but the best kind occurs when all the pieces line up just right.

The writing, acting, and direction are in sync. The cinematography doesn't overdo the shot, just throwing a little style on the substance in front of the camera. A subject matter, or true event, could possibly lie at the center of the story. All it needs is the right dedication in order to still be timely.

Aaron Sorkin's "The Trial of the Chicago 7" is powerful in all the right ways. It will enrage and engage your mind, showing some of the ugly past of the United States of America that you possibly didn't know about and connecting it to the current hot debate at hand: The Presidential election and some riots.

Back in 1968 at the Democratic Convention in Chicago, just a little under four hours away from where I type this, seven men were put on trial after a series of riots went bad, and the police got involved. A policed state with a political convention may have been a recipe for disaster, but the powers that be want a pound of flesh and have extracted a soul or two from each big group: the Yippies, led by Abbie Hoffman (Sacha Baron Cohen) and Jerry Rubin (Jeremy Strong); the chairman of the Black Panther organization in Bobby Seale (Yahya Abdul-Mateen II); a pair of social activists in Tom Hayden (Eddie Redmayne) and Rennie (Alex Sharp); the leader of the coalition against the war in Vietnam, David Dellinger (John Carroll Lynch).

The war in Vietnam was what drove most of these men to collide on that fateful day, and credit Sorkin with keeping the actual riot footage tabled until more than halfway into the movie. Instead of unleashing the visual torment, the writer/director lets you get to know these courageous souls first. We meet them in their natural habitat on various stages, but get to see them interact and try to form a new alliance in a courtroom, one being governed over by the tenured by inept Judge (Frank Langella) and prosecuted by the best of the best in Richard Schultz (Joseph Gordon-Levitt).

But this isn't a completely serious, diabolical courtroom drama ALL the time. Sorkin threads in humorous moments, including the many instances where the Judge just seems out of it or in on it. While you can get an idea of where it's going due to the wonderful thing called Google, I'd advise you to watch this without much information given outside of what's been said here. In order to truly appreciate Sorkin's film and this riveting story, you need to know little going in.

In case you hadn't noticed, the cast is out-of-this-world tremendous. Big casts aren't as rare as people would think, but one like this firing on every cylinder is a treat. Mark Rylance is arguably the MVP here, playing counselor William Kunstler, who was on the defendants bench, but some had doubts about his real worth and passion for the case. Rylance is the sort of actor who doesn't need to shout or change his voice in order to give a performance; it hits you harder because he's just playing the role straight. The power comes in the understated yet firm manner with which he delivers the dialogue. Some of the finer moments of "The Trial of the Chicago 7" involve Rylance's gutsy lawyer going toe-to-toe with Langella's faulty judge.

It's there where Sorkin thrives. His writing is like David Mamet, but with a better GPS attached to it. It's sharp in an unreal way and relentless. Sorkin doesn't just write a few good scenes for a few good men here. Take a short yet potent introduction to Seale early on, which allows Abdul-Mateen II to show off his skills with a sad but true monologue about all the great minds who have been gunned down. People like Martin Luther King Jr, Malcolm X, and Bobby Kennedy. What sounds like an elbow drop from the top rope is also the gasoline that makes the movie explode. When the quiet way doesn't work, protesters and activists alike will try something else. But did they actually start the fight in Chicago?

When I say Rylance is the MVP, an argument is definitely attached to the statement. Everyone here gives a signature performance. It's the rare large ensemble (think of "Spotlight") where each actor has a moment to shine. Strong, who owns an Emmy for his superb work on HBO's "Succession," is sweet and soulful as the unyielding yet honest Rubin. Cohen deserves Oscar attention simply for the fact that he gives Hoffman that larger-than-life allure and the sad, depressive demons that built up walls in his mind. Gordon-Levitt may be the best at handling Sorkin's words, firing them out like a Tommy Gun at times in the courtroom. Redmayne lets the accent slip here and there, but he imbues Hayden with that restlessness and fearlessness that gets people moving.

ne can't forget about character actors like Ben Shenkman and Carroll Lynch, a pair of actors who people just forget about most times due to the fact that they slip into the room unnoticed sometimes. Lynch gets a show-stopping moment halfway in, while Shenkman drops an incredible line during a scene. Langella, such a pro and a force to reckon with when he merely opens his mouth, gives Judge Julius Hoffman the right mix of hopeless scorn and anger. The backbone of the rigged deck, Langella could see some Oscar attention as well. Anybody here really could.

The cinematography and score work hand in hand, swinging the lens around the room with aplomb while layering in the sounds and fury of history unfolding before our eyes again. This is as timely as it gets, folks. Sorkin is taking his big swing at the election with this moving film, but he's not preaching about who should sit in office and what our country should look like. He wants to talk about the messier aspects of war, a country at odds with each other, and the corruption that poisons the well decade after decade. That's where he always likes to shoot, and it never loses power. It didn't with HBO's "The Newsroom," "The West Wing," or his other directorial effort, "Molly's Game."

With "The Trial of the Chicago 7," Sorkin has combined the real and the emotion in one package. It's a beautifully-composed film that never stops punching. Powerful in all the right ways and gets you thinking while finding different ways to make you laugh as well, because humor is the best medicine after all--even for something called chaos. Everyone who sees this film will have a favorite cast member, but won't be able to deny the rest of the talent here.

You could throw all the awards at this film, but if it doesn't net the Oscar for screenplay next year, I'll hold Hollywood in contempt.

It streams on Netflix tomorrow. I implore you to watch it. 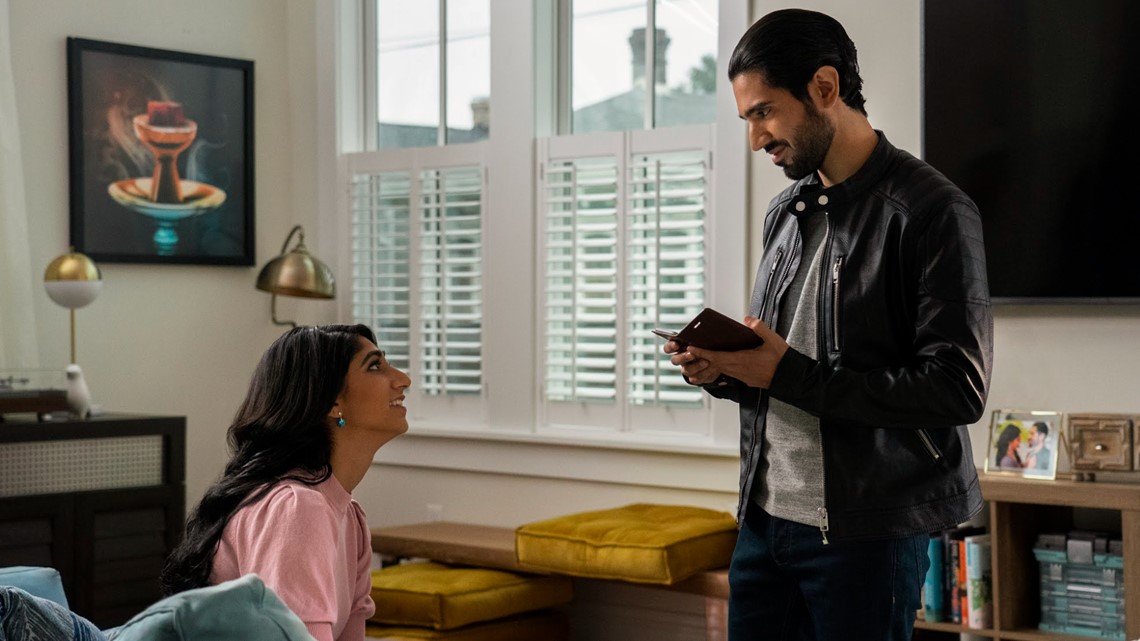 'Evil Eye' Review | One should expect more quality from a film with the Blumhouse name behind it
Supernatural horror thrillers are a dime a dozen these days, and this new Blumhouse tale fails to make any sort of impression. ST. LOUIS - A man can be a dream to the daughter and a nightmare to the mother, but usually it doesn't involve demons, spells, murder, threats, and deception.