A St. Louis area mom said her son was defending his property when he pulled a gun, but he ended up in prison 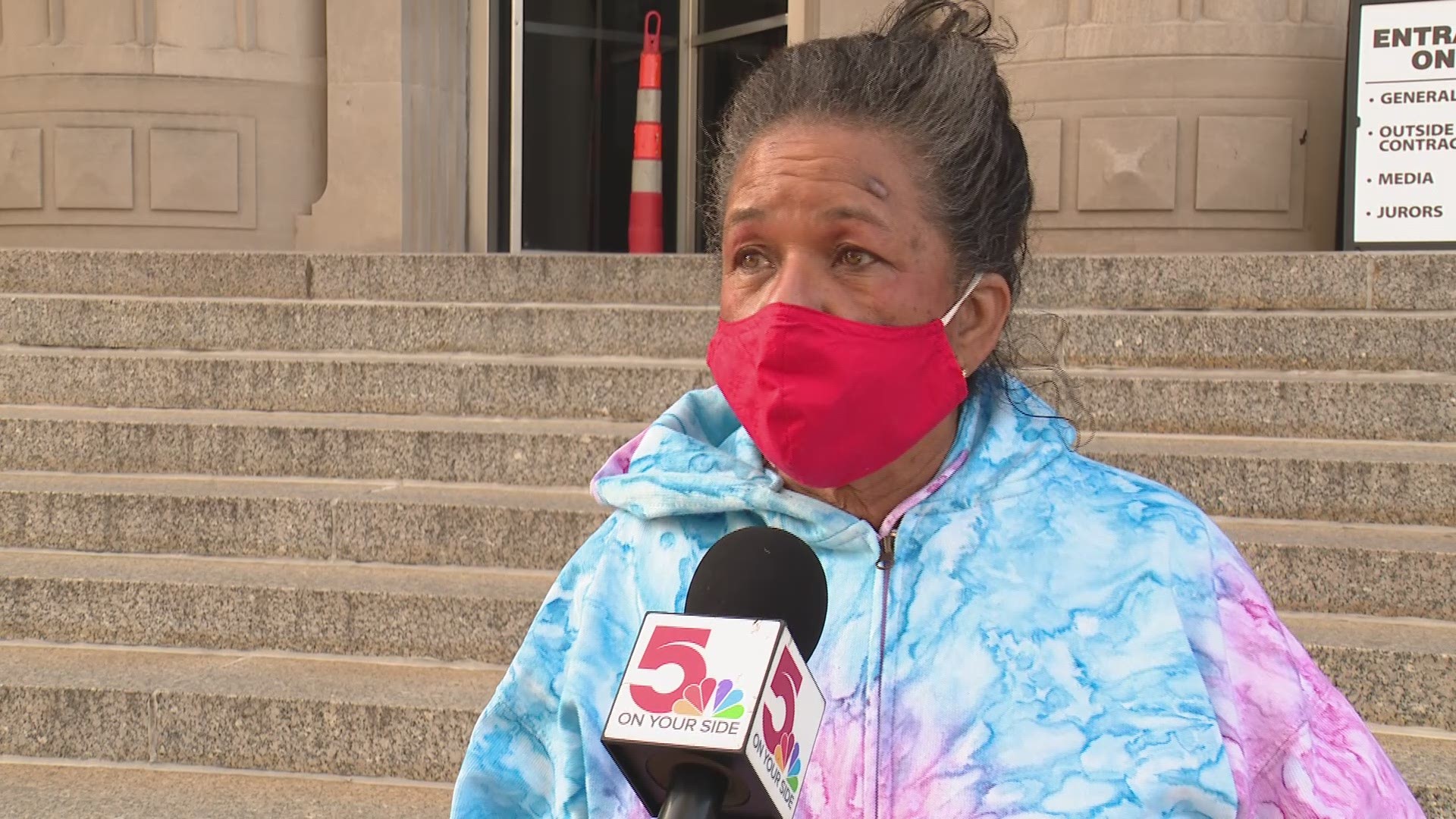 ST. LOUIS — When a wealthy white couple points guns at protesters standing on private property, the attorney general, the governor and even the president get involved when the local prosecutor charges them with a crime.

But when a Black man shoots a white man because he felt threatened on his own property, he ends up spending 26 years in prison.

Youvette Townsend made that argument to me on the steps of the Carnahan Courthouse following the arraignment of Mark and Patricia McCloskey.

I watched as she inched her way closer and closer to the couple.

A burgundy mask covered most of her face.

And the two white cardboard posters she stacked together with the words, “My Black son should have a right to save his own life on his own land when a white crack head mother and son (who) should not (have) even been there and tried to kill him” nearly covered her petite frame.

The sign she held below it read: "No Justice. So Wrong. So Racist."

She finally got her chance to talk to the couple when their attorney started talking to the gaggle of reporters.

“I just want you to know I support you and I wish you well,” she told them and went on to tell them, from her perspective, her son did the same thing the McCloskeys did.

And protected his property.

But Youvette Townsend is Black.

And, so is her son, Carl Townsend.

The man he shot in the arm was white.

I told Youvette Townsend that the group of mostly Black protesters had marched through the Central West End, passing businesses and other houses along the way, without a problem – until they got to the McCloskeys’ mansion along Portland Place.

So I asked her why the McCloskeys felt threatened, and no one else did?

“Who would not feel the same way?” Youvette Townsend said. “If you were in your home and a bunch of people were coming around, you don’t know what they’re going to do, but you know they’re angry and they’re upset, would you stand back and do nothing?

She told me about how she supports the Black Lives Matter movement, but she doesn’t condone the violence – or the threats of it that she said she has heard.

She also noted she’s from a different generation of protesters who marched for civil rights during the Martin Luther King era.

“I’m not for burning buildings,” she said. “But I understand the anger. Just walking and chanting ‘We shall overcome’ isn’t going to get it done.’”

She said she believes Circuit Attorney Kimberly Gardner should not have charged the McCloskeys with a crime, and doesn’t believe the charges will stick.

But they did for her son.

Her son’s confrontation unfolded in June 2018 in a rural part of St. Charles County.

She told me her son owned a piece of property and gave the woman who had been living there for 90 days rent-free to find another place to live.

“When moving day came, everybody was mad,” she said.

Youvette Townsend said the tenant’s son came there to help his mother move.

But Carl Townsend and the tenant’s son started arguing. The tenant used the n-word as Townsend argued with the son.

The two men fought, and Carl Townsend shot the man. Youvette Townsend said the man pulled a gun on her son and cocked it first.

“If he wanted to kill him, he could have killed him,” Youvette Townsend said of her son, who she said completed gun training courses when he was younger in order to hunt. “He didn’t have hate in his heart. He didn’t want a body shot …

“He had every right to save his life.”

I pulled the St. Charles County police report on the incident.

Carl Townsend initially lied to police, according to officers, telling them he was inside his house at the time of the shooting with his wife.

He refused to allow them to perform a test to check for gunshot residue on his hands.

And refused to allow officers to search his property.

Witnesses told police they saw Townsend and the victim arguing and then fighting.

The victim told police Townsend hit him first and then shot him. He told police he ran when Townsend tried to reload his gun.

The victim also told police he, too, was armed, but that his pistol fell out of his pocket during the struggle, according to the report.

In February 2020, an all-white jury convicted Carl Townsend of first-degree assault, armed criminal action and unlawful possession of a weapon.

Carl Townsend was a convicted felon at the time of the confrontation, which means he should not have had a gun.

And, by law, Townsend had given the tenant 90 days to move out, so she was there lawfully on the day in question.

He was sentenced to 26 years in prison.

In all likelihood, he will serve between 10 to 12 years.

Meanwhile, the McCloskeys will be pardoned should they be found guilty – as long as Gov. Mike Parson wins the election.

His challenger, Nicole Galloway, won’t say whether she would pardon them.

Youvette Townsend is hoping the governor gives her son’s case the same attention as he has for the wealthy white couple she supports. 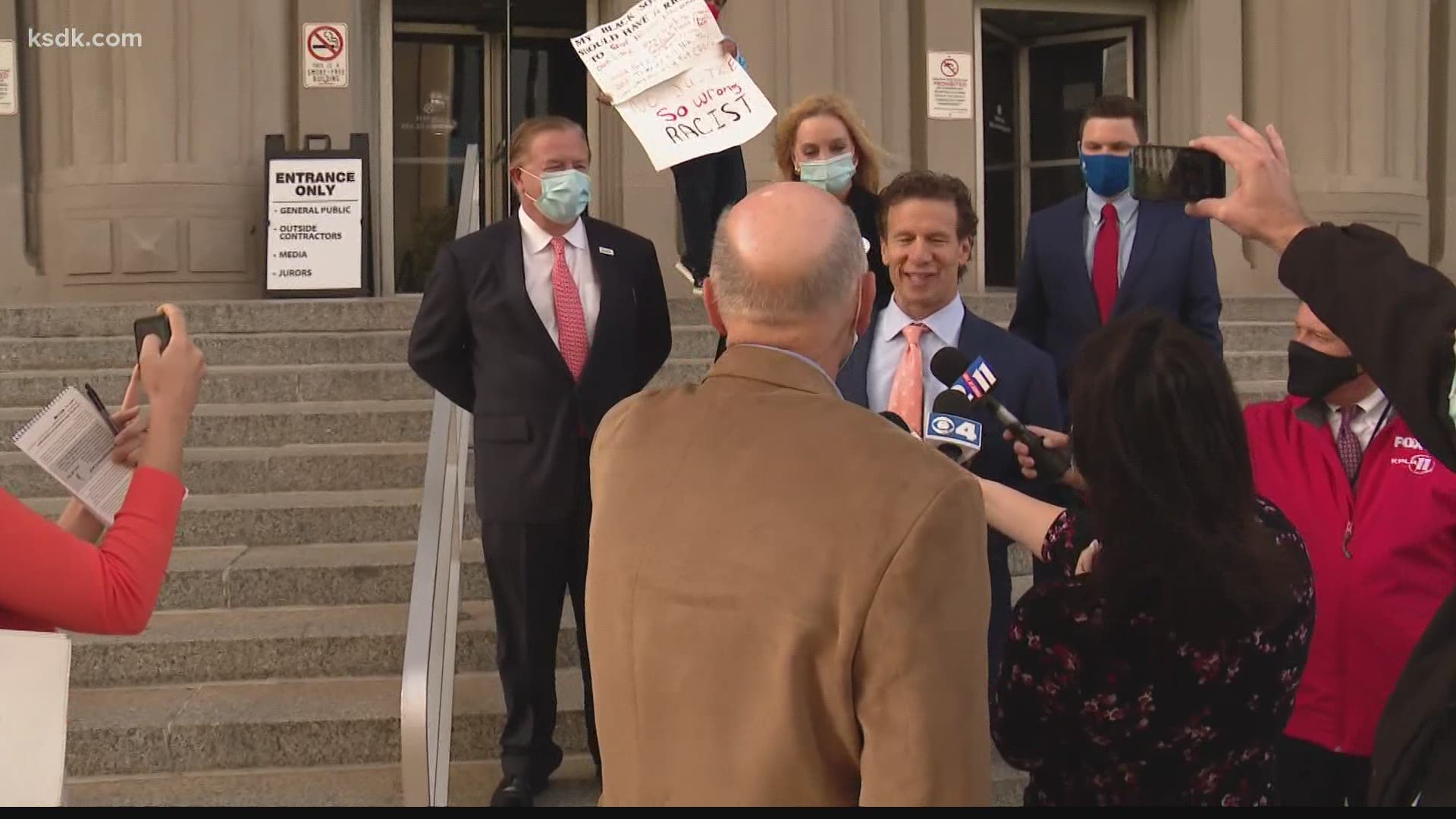