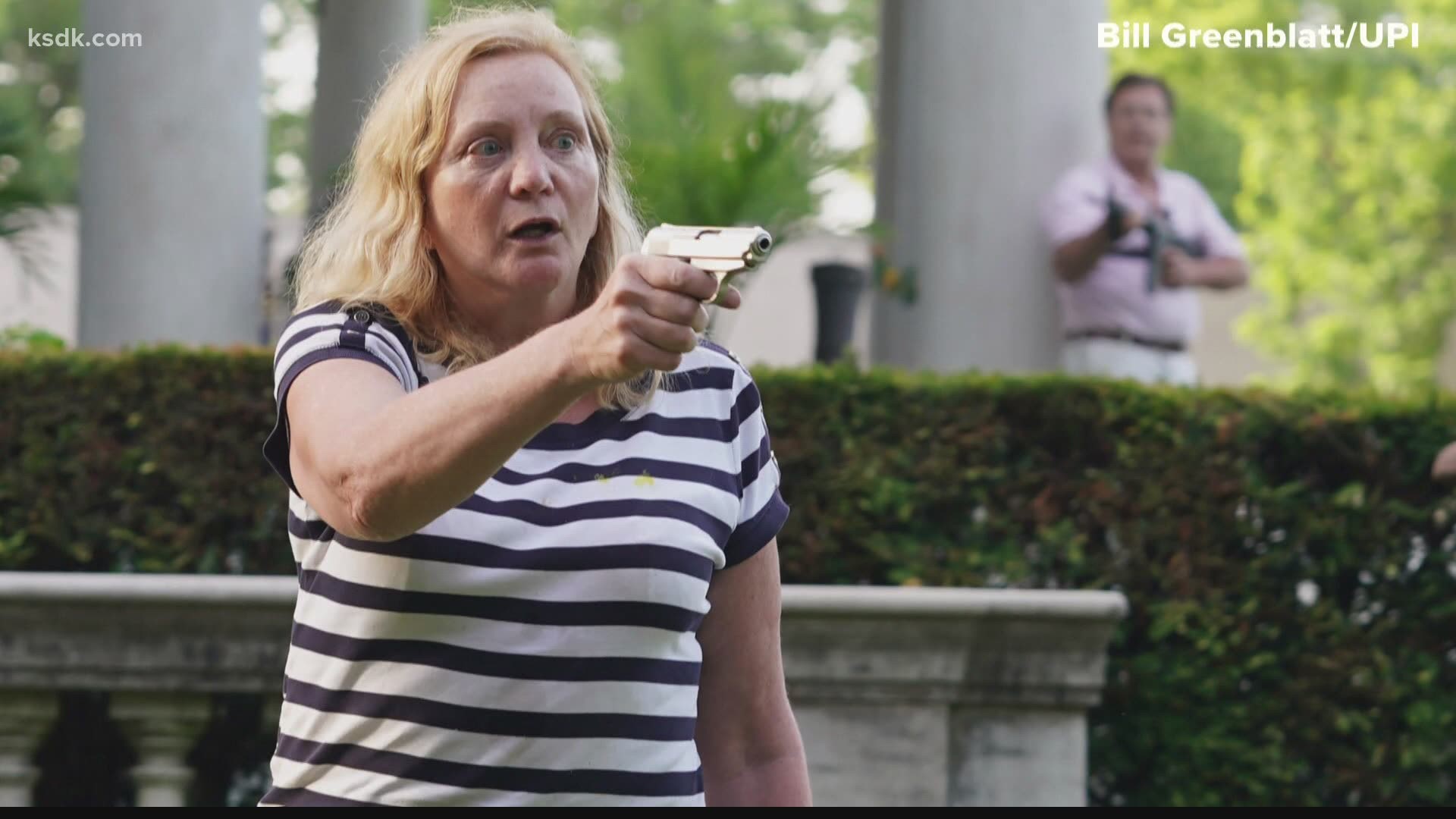 Mark and Patricia McCloskey, the Central West End couple who confronted protesters June 28 with a rifle and a gun in Mayor Lyda Krewson’s neighborhood, have been charged with unlawful use of a weapon/flourishing.

"I'm flat out pissed off. This has gotten to be outrageous," he said, telling host Tucker Carlson he won't apologize and won't back down.

The unlawful use of a weapon charge is a class E felony, which can carry a sentence of up to four years in prison and a fine of $10,000. Sources tell 5 On Your Side Gardner's office will be issuing a summons for the couple to appear in court.

But Missouri Attorney General Eric Schmitt is stepping in to help the McCloskeys. He announced he's trying to get the case dismissed.

"Enough is enough. As Missouri's chief law enforcement officer, I simply will not stand by while Missouri's law is being ignored," he said in a video statement.

Schmitt was referencing the Castle Doctrine, which in Missouri, allows people to defend not only their homes but their property.

A Saint Louis University constitutional and criminal law professor said the private street where the McCloskeys live is covered by the Castle Doctrine.

"There was no right to protest on their street. The protesters were actually trespassing," professor Anders Walker said.

Walker said the couple has a strong defense if the charges stick.

Police executed a search warrant at the McCloskey home recently and seized the rifle from the couple. The McCloskeys told police that attorney Al Watkins had the pistol seen in photos of the couple that went viral.

The couple pointed the weapons at protesters who were on their way to  Krewson's house upset with her decision to say the names of those who wrote to her, urging her to close the city jail, known as The Workhouse.

In a statement announcing the charges, Gardner said the McCloskeys waved their weapons in a "threatening manner" at "peaceful, unarmed protesters."

"It is illegal to wave weapons in a threatening manner at those participating in a nonviolent protest, and while we are fortunate this situation did not escalate into deadly force, this type of conduct is unacceptable in St. Louis," she wrote. "The decision to issue charges was made after a thorough investigation with the St. Louis Metropolitan Police Department."

Police identified two victims by their initials in court documents, saying that Mark McCloskey, 63, screamed at the demonstrators, lowered his rifle and pointed it at those walking through a gate and onto the private street and sidewalk along Portland Place.

Patricia McCloskey, 61, began yelling at protesters telling them to "go" while pointing a handgun at demonstrators as her finger was on the trigger.

In a 911 call, Patricia McCloskey told dispatchers, "I've got to get a gun," and ended the call, according to the documents.

In order to issue the charges, prosecutors must prove the guns were capable of lethal force.

Credit: UPI
Al Watkins, the attorney for the couple that aimed guns at Black Lives Matter protesters when they walked into their neighborhood in St. Louis on June 28, 2020, produces the pistol that Patricia McCloskey was holding, before surrendering it to St. Louis Police, during a press conference in Clayton, Missouri on July 11, 2020. The inoperable pistol was taken by police while the AR-15 rifle that Mark McCloskey was holding, was reportedly seized by police on July 10, 2020 at the home. The two have defended their actions by saying they felt their lives were being threatened. Photo by Bill Greenblatt/UPI

Watkins told reporters the pistol Patricia McCloskey used was only a prop from a federal trial that the couple used in a case. Both of them are attorneys.

A source familiar with the investigation told 5 On Your Side that police did not find any ammunition at the McCloskeys' home and the rifle was not loaded when they seized it.

Watkins is no longer representing the McCloskeys, and their current attorney is now Joel Schwartz.

Schwartz said he has fielded dozens of calls from people across the country wanting to replace the weapons taken from the McCloskeys. One gun store offered to replace the guns and give them five more, he said.

Schwartz issued the following statement in response to the charges Monday: "The charges filed today against my clients, Mark and Patricia McCloskey, are disheartening as I unequivocally believe no crime was committed.

"I, along with my clients, support the First Amendment right of every citizen to have their voice and opinion heard. This right, however, must be balanced with the Second Amendment and Missouri law, which entitle each of us to protect our home and family from potential threats.

"With that being said, given the heightened attention focused on this matter due to the current political environment, I don’t believe it is prudent to comment any further, at this time, or to try this case in the media.

"I look forward to reviewing the evidence and defending the McCloskeys against these allegations."

But Gardner said she is "open" to recommending the McCloskeys participate in one of her diversion programs designed to "reduce unnecessary involvement with the courts."

She wrote that she is also open to having a man she recently charged for assaulting a "peaceful demonstrator" at the King Louis IX statute on June 27 enter the same diversion program. In that case, the victim had gathered with priests to pray near the statute that has been the site of calls to rename the city and distance itself from what some see as a racist moniker.

"I believe this would serve as a fair resolution to this matter," Gardner wrote. "We must protest the right to peacefully protest, and any attempt to chill it through intimidation will not be tolerated."

The case has garnered national political attention because it's a "microcosm" of the polarization we're seeing nationwide, which is why both sides appear to be latching onto the story, 5 On Your Side political analyst Anita Manion said.

The McCloskeys appeared at a virtual Trump campaign event over the weekend.

"I think this is a continuation of that law and order idea -- that folks have to protect themselves from lawlessness," Manion said.

Locally, the criticism from the right of the prosecutor's handling of the case could help her in her primary fight next month.

"Saying she wont be bullied by President Trump, Governor Parson and Senator Hawley is not a bad thing when you're running in a democratic primary," Manion said.