Multiple police sources told the I-Team a 25-year-old man is responsible for four connected homicides in the St. Louis area and two in Kansas City, Kansas 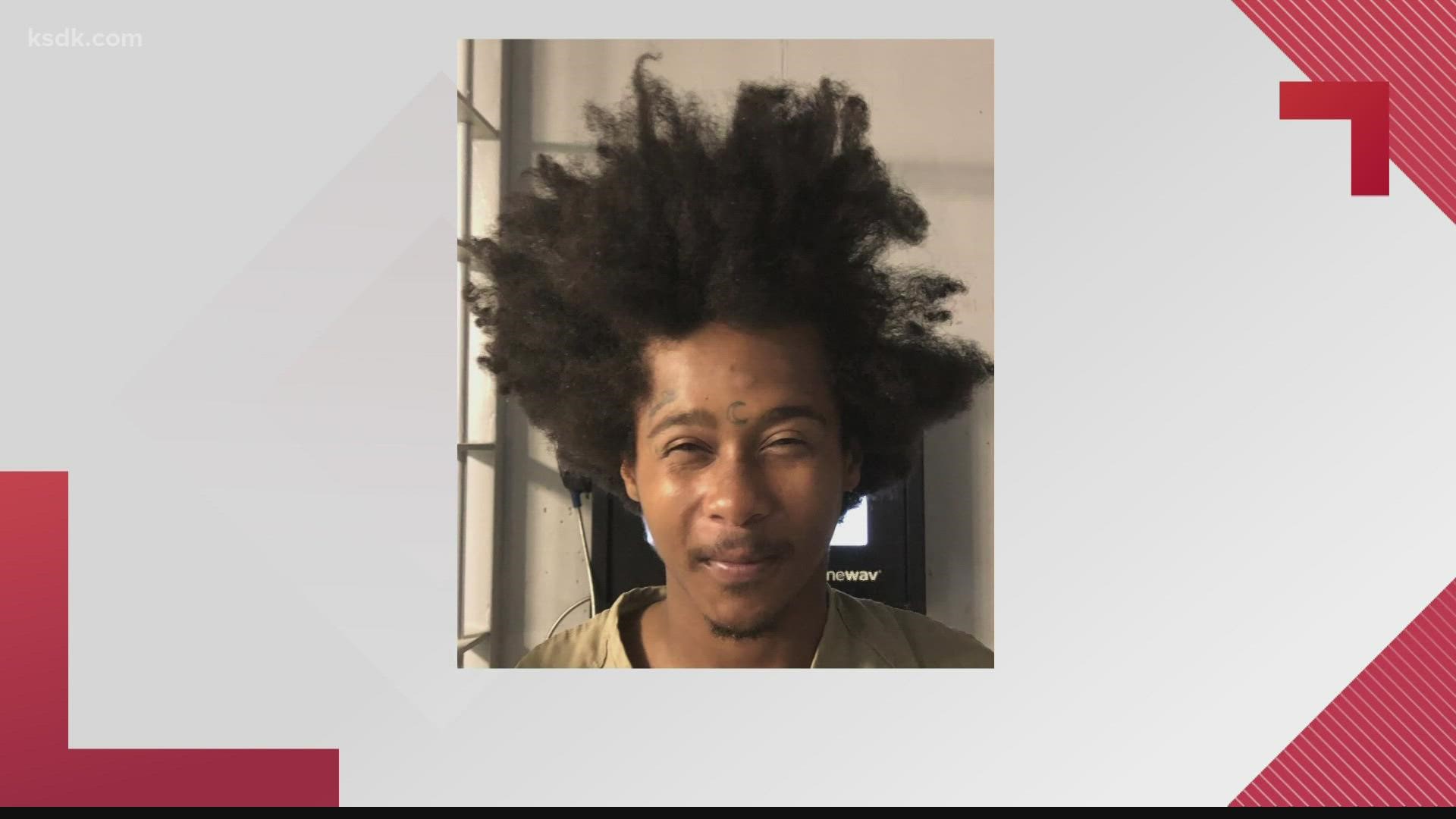 ST. LOUIS — Police have arrested a man believed to be the serial killer responsible for six murders and several shootings that happened in St. Louis, St. Louis County and Kansas City, Kansas, during a span of several weeks in September and late October, the I-Team has learned.

Police linked Perez Reed, a 25-year-old Bellefontaine Neighbors man, to two murders and one shooting in St. Louis City and two murders in St. Louis County after he used the same gun to shoot all of the victims, a .40 caliber Smith & Wesson pistol, according to multiple police sources.

Police then connected Reed to two murders in a high-rise apartment complex in Kansas City, Kansas in late October through other evidence, according to the sources.

Within minutes of 5 On Your Side publishing its initial report, St. Louis County Prosecuting Attorney Wesley Bell's office announced two counts of first-degree murder and one count of first-degree assault against Reed.

Credit: St. Louis County Prosecuting Attorney's Office
Perez Reed, 25, was charged with two counts of murder and one count of assault in St. Louis County. He is also suspected of multiple other homicides in the St. Louis and Kansas City areas.

St. Louis Circuit Attorney Kimberly Gardner's said they are continuing to work on the case, but charges have not been filed. The full statement is as follows:

"The Circuit Attorney’s Office has been working closely with the St. Louis Metropolitan Police Department from the beginning on this investigation. This is a complex, multi-jurisdictional case. The cases in the City of St. Louis are currently under investigation to ensure the most important goal - that justice is brought to the many victims and their families; and the person responsible is held accountable for these heinous crimes."

But some victims didn't fit into any type of pattern and some survived. One man was waiting for a bus when he was shot but survived, according to the sources.

Police do not believe the victims knew each other, and most of them did not know their killer — who does not have much of a criminal history, according to court documents.

The case came together after police in Kansas City called St. Louis police following two murders there in late October in which a man and a woman were found shot to death in separate apartments in the same complex.

Police then connected the suspect’s cellphone to an Amtrak ticket the suspect bought to bring him back to St. Louis from Kansas City. FBI agents followed him onto a train, according to court documents.

He got off the train and boarded a bus. Police arrested him when he got off the bus in Independence, Missouri, on Friday, according to court documents.

Once in custody, Reed confirmed his cellphone number to police, admitted he provided his identification to a security guard at the apartment complex in Kansas City, Kansas where two of the victims were found and denied hurting anybody.

He had the alleged murder weapon and shoes that matched evidence found at the crime scenes, according to the sources.

Reed was charged with one federal count of transporting firearms across state lines with the intent to commit a felony, which carries a 10-year maximum sentence.

Police sources said the assistant circuit attorney on duty from Circuit Attorney Kimberly Gardner’s office for the weekend did not attend the interview with Reed at St. Louis police headquarters, but an assistant United States Attorney did, so Reed is being held on the federal charge for now.

In that shooting, police say the man was waiting at a bus when Reed approached him from behind and shot him several times without warning, according to court documents.

The first homicide happened almost exactly 24 hours later at 9:34 p.m. in St. Louis County when Marnay Haynes, 16, was shot and killed in the 9900 block of Glen Owen Drive. She had been shot in her arm and head and police found two .40 caliber Smith & Wesson cartridge cases at the scene, according to the documents.

Three days later, at 10:23 p.m. on Sept. 16, a woman was shot in the face behind a building in the 4500 block of Adelaide Avenue. Police responded to a nearby gas station where they found the victim who was conscious and breathing but unable to provide a statement, according to court documents.

Police followed a trail of blood that led to the rear of the building where the shooting took place and found one .40 caliber Smith & Wesson cartridge casing at the scene, according to the documents.

Then, less than two hours later, at 11:45 p.m. that same night, St. Louis police found 49-year-old Pamela Abercrombie lying in the street suffering from a gunshot wound in the 3800 block of West Florissant Avenue -- only a half mile away from the previous shooting scene. She died at a hospital and police found a .40 caliber Smith & Wesson cartridge at that scene as well, according to court documents.

Three days after that, on Sept. 19, police found 24-year-old Carey Ross in a vacant lot suffering from a gunshot wound in the 1500 block of Mullanphy Street. He was pronounced dead at the scene, and police believe he may have been deceased for an extended period. They found the same type of cartridge casings at that scene.

Police later determined gunshots had been detected in the area at 11:52 p.m. on September 18. Officers who responded to the area that night did not find the victim.

On Sept. 26, the killer struck again, this time in Ferguson. Police found 40-year-old Lester Robinson dead in the 1700 block of Barbados Lane at about 7:15 a.m. after ShotSpotter detected shots had been fired there. They also found similar shell casings at that scene.

ShotSpotter is a program that detects gunfire through audio waves and alerts police to the location.

Kansas City, Kansas, police found the body of 35-year-old Damon Irvin Nov. 1 and the body of 25-year-old Rau'Daja Fairrow Nov. 2 inside a high-rise 302-unit apartment building. Police believe they had been shot and killed several days before they were found, according to sources.

In Reed's federal weapons case, prosecutors allege Reed was the last person seen with Irvin and Fairrow four days before police found them shot to death.

Police found Reed traveled from St. Louis to Kansas City on Oct. 28 on an Amtrak train. About 1 1/2 hours after his train arrived at Union Station, surveillance video from the victims' apartment building showed Irvin holding the door for Reed as they both entered the building.

Four minutes later, both are seen walking into Irvin's apartment together. Irvin's family was unable to reach him after Oct. 28 "despite numerous attempts to do so," according to court documents.

Surveillance footage recorded Oct. 29 at about 6 a.m. showed Reed leaving Irvin's apartment alone, but Irvin is not seen leaving his apartment after that date.

On Nov. 2, police found Fairrow's nude body inside her apartment in the same complex. She had been shot in her head and upper back, and her cellphone and wallet were missing, according to court documents.

Security staff at the victim's apartment building documented that on Oct. 29, Fairrow entered the building with Reed, who presented a driver's license with his name on it. Surveillance footage captured an image of Reed with a crescent tattoo on his forehead.

Investigators determined Reed communicated with Fairrow 652 times between October 5 and 29. About 42% of the communications were outgoing from Reed's phone. Reed's phone stopped calling Fairrow's phone after October 29.

Reed told police his relationship with Fairrow was limited to buying drugs from her, according to court documents.

Police tracked down booking records from Reed's previous arrests and determined he had a crescent moon tattoo on his forehead.

Police found the body of a third man in a separate apartment there, but later determined he died from natural causes, according to KSHB-TV, the NBC affiliate in Kansas City.

Court records show Reed got married in June 2019 in Kansas City, but the couple separated about two months later.

Reed's wife filed for divorce in Jackson Co., Missouri, in July, and currently lives in Kansas City, Kansas. A court hearing is scheduled for early December, and the couple did not have any children.

The divorce was uncontested, but had to be filed again after it was dismissed because of a missed court date. A new affidavit shows both Reed and his wife have been unemployed for the duration of their marriage and are life-long Missourians.

His criminal history includes a reckless driving charge in Charlack in 2015 and an assault charge in 2019. In that case, he was charged with fourth-degree assault for allegedly head-butting a corrections officer at the St. Louis County Justice Center.

He had been arrested for riding the MetroLink without a ticket, gave false information about his identity and was arrested on outstanding warrants. That case had been continued multiple times because all of the notices to appear were returned as undeliverable mail.

Reed was supposed to appear in court Monday about the assault.

In late 2017, Reed filed a federal lawsuit accusing a public defender of deprivation of rights while he was incarcerated at the St. Louis County Justice Center in Clayton.

In the suit, Reed said he was being falsely imprisoned and said he wanted the public defender to "stop harassing" him about undergoing a mental health exam before his trial, claiming he was "mentally fine."

The I-Team learned Monday the original charge he was facing in that case involved an alleged arson attempt that was later dismissed by a judge for failure to prosecute.

In that case, Reed asked the court for $50,000 and for his release from custody because his family had left him, he lost his job and he was traumatized from being in a violent environment.

Erin Richey of the I-Team contributed to this report.