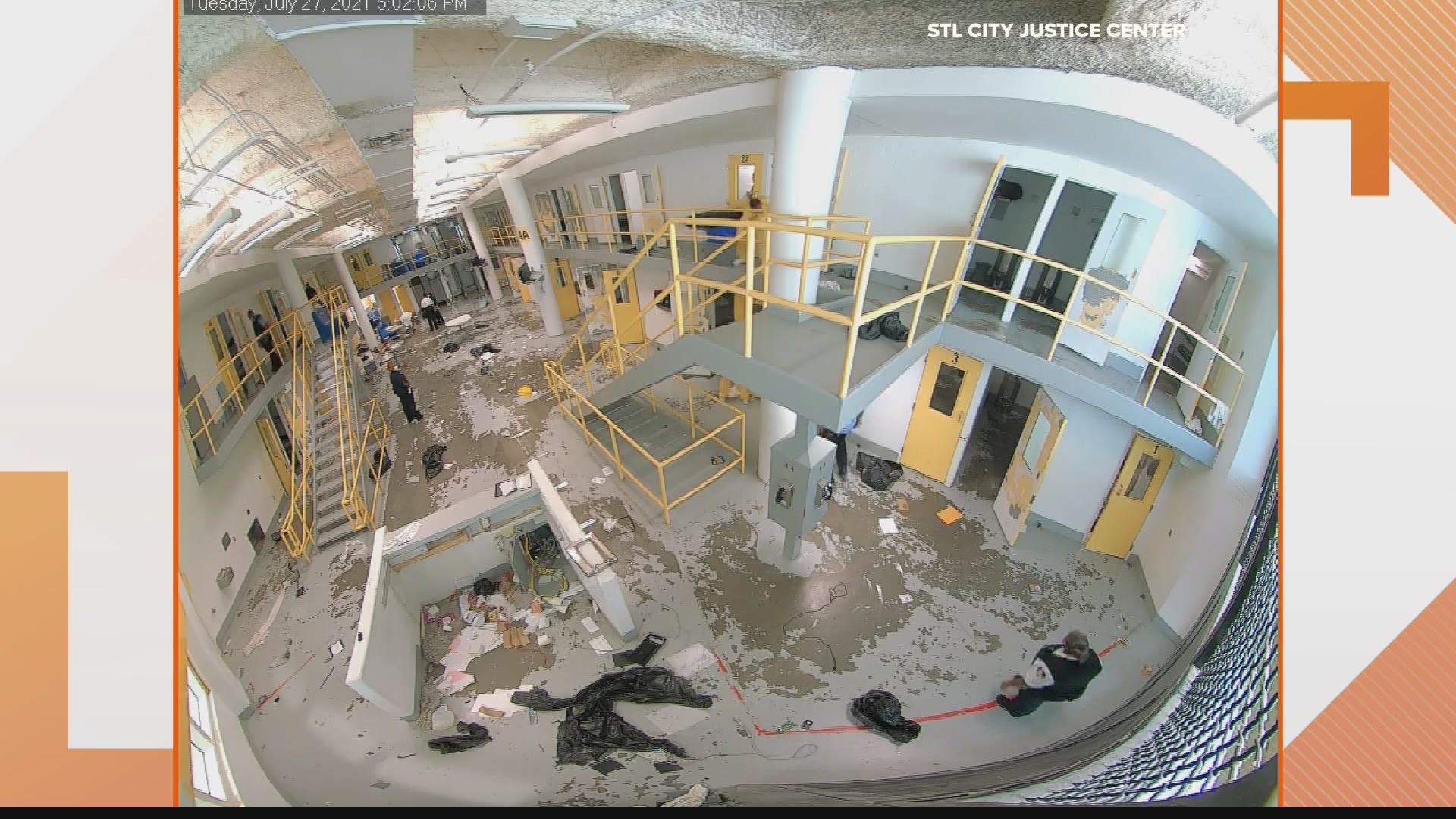 ST. LOUIS — Detainees once again left their cells at the City Justice Center Tuesday and damaged the facility.

It’s the fourth time in less than a year inmates have let themselves out of their cells and damaged the downtown jail.

According to documents obtained by the I-Team, several inmates will be charged with “destruction of property including a microwave, computer monitors, throwing trash and other destruction.”

Carson ordered inmates in one section to be locked down until the investigation into the damage concludes, and other detainees will be able to get their recreation time in restraints, one or two at a time for one hour per day, according to the documents.

Video obtained by 5 On Your Side shows inmates gathering chairs and other items from the common area. Then, one inmate covers the surveillance camera with what appears to be a piece of cloth.

There is loud banging and yelling for about an hour. What appears to be a jail employee then pulls the cover off of the camera. Then the video shows papers, trash and other items scattered around the area. Jail employees begin the cleanup process.

Editor's note: 5 On Your Side has edited out most of the portion of the video that shows the covered camera for length purposes. You can view the video in the YouTube player below:

A spokesman for Mayor Tishaura Jones issued a statement to 5 On Your Side Tuesday regarding the incident.

“Corrections officers moved quickly to resolve the issue,” according to Nick Dunne. “The Department of Corrections inherited malfunctioning locks and an outdated locking system. Maintenance and upgrades to these systems is ongoing.”

St. Louis police were called to the building along Tucker Boulevard for a “disturbance” at about 4:45 p.m.

A police spokeswoman said officers did not enter the building but were there in a support capacity.

Inmates did not leave the facility.

Jail staffers are preparing restitution orders for $350 to $500, according to the documents sent by Acting Corrections Commissioner Jeffrey Carson to other jail officials.

Problems in the city's jails have been growing for months. A similar disturbance took place in December, but there was no exterior damage to the building.

Then, two riots followed in February and April in which detainees attacked a guard, broke windows, set fires, threw trash and other debris from the windows to the street below essentially destroying a city employee’s car.

Former Mayor Lyda Krewson’s administration said the locks at the jail had been faulty for years, but detainees there had not rioted.

A task force issued a report in May saying detainees rioted due to frustrations over COVID-19 protocols, delays in their cases within Circuit Attorney Kim Gardner’s office and other issues.

Jones’ administration closed the city’s second jail, the Medium Security Institution, also known as the Workhouse, on July 1 saying detainees there were living in inhumane conditions.

The move consolidated hundreds of inmates in the downtown location despite the problems with the locks on the cells there.

The I-Team reported July 19 the new locks the city is having installed on some of the cells were malfunctioning, too.

That move prompted the federal government to send about 200 federal inmates to jails who were housed in the St. Louis facility across the state, and, in some cases, out of state.

The feds used to pay the city between $7 and $8 million a year to house the inmates – a lost revenue the Jones administration said it has already figured out how to absorb.