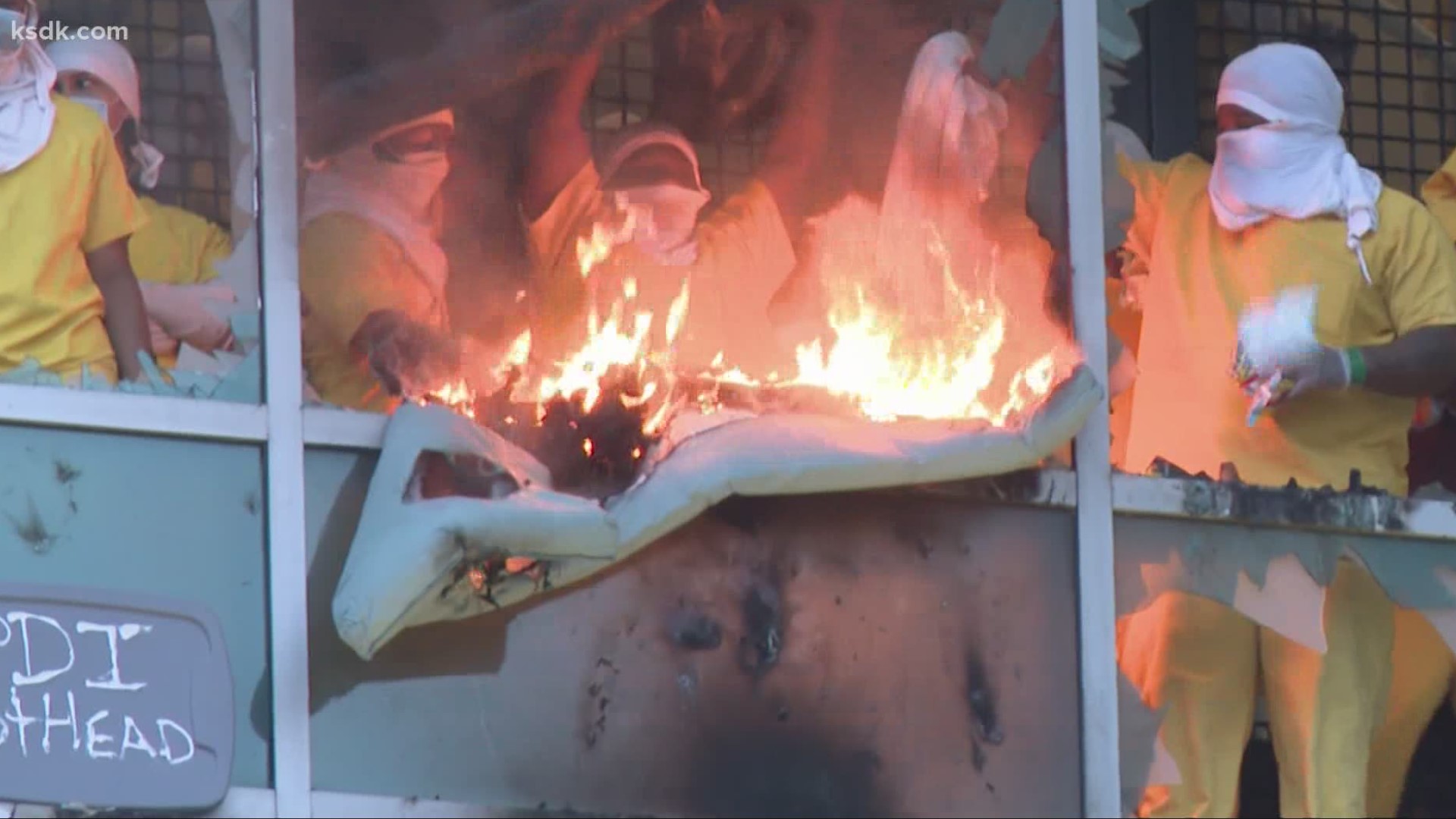 ST. LOUIS — A piece of paper serves as a key and a spark inside the City Justice Center in downtown St. Louis.

It’s all any detainee being held there needs to compromise the locks on their cells and put into electrical outlets to start fires during a riot, according to a Corrections Division employee who spoke to the I-Team on the condition of anonymity to protect their job.

“It’s amazingly easy,” the employee said of the inmates’ ability to unlock their cells. “I'm not sure people understand that you have 60 to 65 inmates up and down, murderers, rapists.

“And they just feel like it. So they come out and if two or three of them get upset, it's like dominoes. It's like 10 then 15 then 20 and pretty soon you got all 60 of them out. You didn't let them out, but they let themselves out like you let yourself out of your house.”

And it’s been that way for years, according to the employee.

“All those locks were horrible when they installed them,” the employee said of the facility, which opened in 2002. “I guess they just crossed their fingers and hoped that it wouldn't get that bad and they could deal with it.”

But it did get bad.

The jail was the site of two riots just weeks apart earlier this year and is about to get an influx of more detainees should Mayor Tishaura Jones’ plan to close the city’s second jail known as The Workhouse happen July 1.

Her administration insists the locks will be fixed by the time that happens.

“I mean, we've been talking about this for many years," said Interim Public Safety Director Dan Isom. "Yes, it's an aggressive plan, but we're working very hard.”

But this employee, one of several the I-Team spoke to, said the facility is in need of much more than locks that work.

“This isn't television, you don't have correctional officers and lieutenants that are buff,” the employee said. “These aren't highway patrolmen.

“It’s your mom. It's your sister. It's your grandmother working as a correctional officer.”

And there’s not enough of them.

The jail was about 80 guards short at the time of the riots.

The city’s director of operations and personnel director have pointed fingers at each other for the delays in hiring. Personnel Director Richard Frank said corrections leaders told his department to suspend hiring because they were anticipating the closure of The Workhouse.

“A lot of that stuff can be prevented if you had two or three officers in a unit because then you're making rounds, they can check doors, inmates will only do what you allow them to do,” the employee said. “Sometimes out of necessity, sometimes out of opportunity, and if you're not making rounds, if you're not doing what you're supposed to do, they will take advantage.

“What should be happening is enough officers in the unit to be able to watch the unit while the other person manages it as well as enough supervision, but when you're pulling people out just for breaks and things like that, and you're so short that you're having to have one person watch two units, that's dangerous.”

The employee said cameras and intercoms go out inside the jail, too.

“We have to check out radios to get in through the doors because they can't hear the intercom,” the employee said.

The employee said jail administrators have been asking the city for money to fix the locks and other issues for years.

The most recent estimate of what it will cost to fix all of the City Justice Center issues is $13 million.

“The Division of Corrections doesn't get a lot of respect, not that they've earned a lot of it, but everybody wants to take money away.

Isom believes the closure of the city’s second jail will help.

Fixing the locks and the control panels are a top priority, Isom said.

And both will be fixed by July 1, he added.

“I think we're working through the process of what are the highest priority things that need to be done right now to control the situation and then making a determination of what can be done in the long run,” he said.

Even if the locks are fixed, the employee said the issues driving the uprisings among the detainees will remain.

“You’ve still got to worry about when you're moving them, when they're out on recreation, they have 24/7 to figure out when they're going to do it and you can't lock them down 24/7,” the employee said. “So fixing the doors and replacing the doors doesn't fix the problem, it just makes it easier to manage it.”

“COVID was more of an ignition than anything else,” the employee said. “I mean, the door problems didn't just start with COVID.”

The courts suspended trials for a year during the pandemic and handled pleas virtually to keep cases moving through the system.

But with the high turnover in Circuit Attorney Kim Gardner’s office, plea offers slowed, too, according to the corrections workers.

Some of the inmates and protesters who joined them outside the jail during the riots chanted, “We want court dates.”

Corrections employees joked internally about how they were chanting outside the wrong building.

“The inmates are really caught in a Catch-22,” the employee said. “They want to get the fair treatment. They want to get a better system. But the way they do it pushes people back.”

The employee said the task force Mayor Lyda Krewson commissioned after the riots "got it right" in their report.

Mahaffey told them: "Since the Circuit Attorney's Office chooses to file over 99% of their cases by complaint, pretrial accused individuals should not be spending an average of 146 days before a probable cause determination is made."

The average length of stay skyrocketed during the pandemic to more than 300 days.

And the longer they stay, the more enemies they make, corrections employees say.

And news about how to open the locks to their cells with a piece of paper spreads fast in a jail where the inmates have nothing to do but wait.