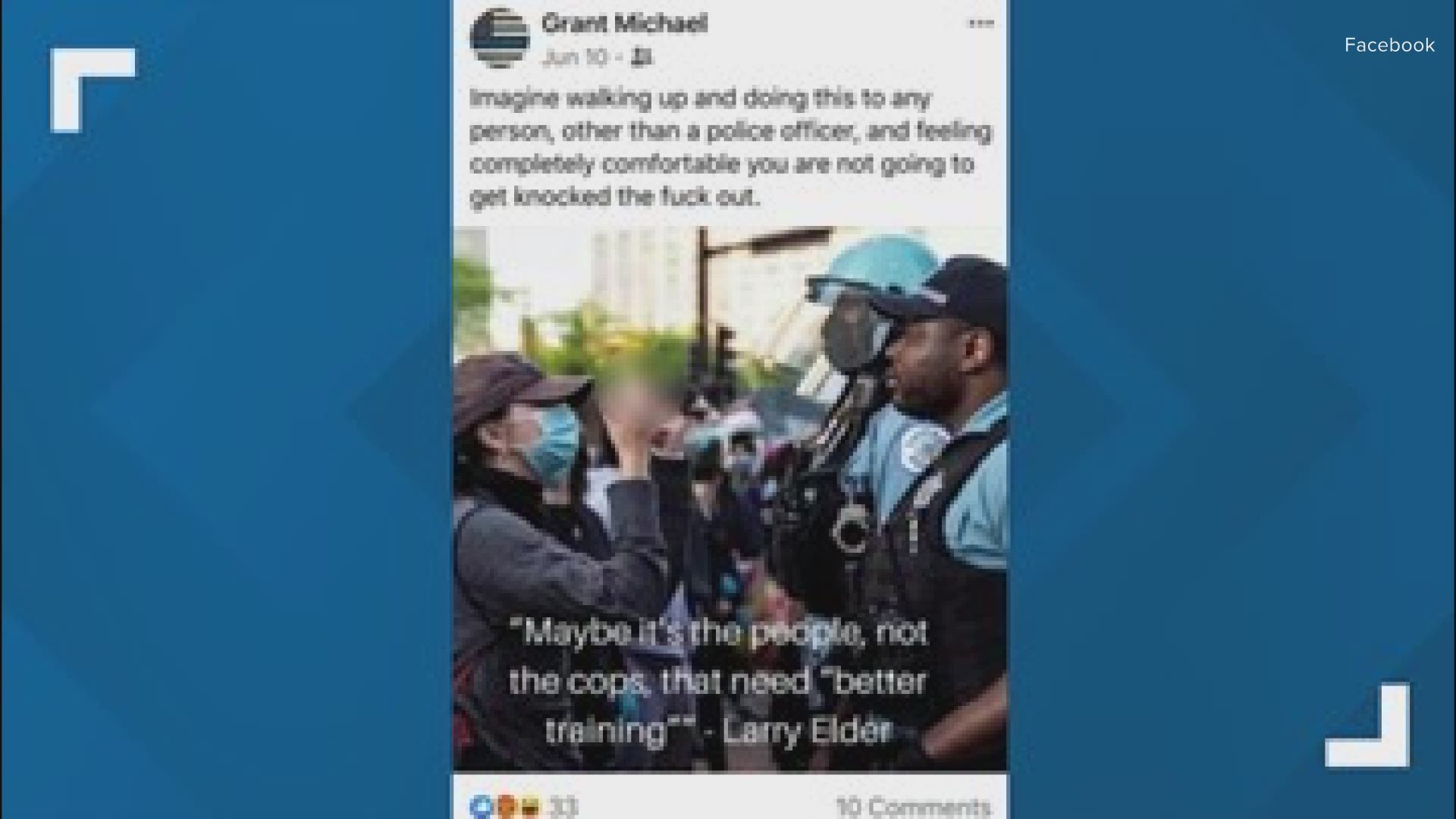 ST. LOUIS COUNTY, Mo. — A St. Louis County police sergeant is under investigation after posting a series of offensive messages toward Black people, anti-police brutality advocates and those with dwarfism on his personal Facebook page, 5 On Your Side has learned.

The department confirmed Sgt. Grant Rummerfield is the subject of an internal investigation and declined to comment further.

The investigation is the latest in a string of racially-charged incidents to hit the county police department in recent months.

Three Black police commanders have filed discrimination lawsuits. Two police instructors were recently fired for using the “n word” during classes. A dispatcher related to Chief Mary Barton was caught on an open police radio mic using the “n word” to refer to Black people who called for help during a domestic disturbance.

The Ethical Society of Police, a membership organization which represents primarily Black officers, sent the following statement about the allegations against Rummerfield.

"Officers who publish racist, vile and ideologically violent posts cannot be trusted to perform their duties in a fair and impartial manner that is consistent with the professionalism citizens deserve. Posts like this illustrate his contempt for African Americans and their communities and a desire to mete out justice through violence upon those he has sworn to protect and serve. At some point, Chief Barton will have to demonstrate an intolerance for such behavior in a way that serves to deter future acts of bigotry by those under her command.”

The department also forbids officers from speaking to the media without approval from its public affairs division. Rummerfield declined to comment. His Facebook page was deactivated this week. 5 On Your Side sent questions to the department this week.

The department’s social media policy states, “Employees shall not use any form of social media or social networking accessible to the public…in any way which adversely impacts the efficiency, effectiveness, or integrity of this department, its employees or themselves, including, but not limited to: impeding the performance of the employee’s duties; impairing or interfering with discipline; or undermining the mission of, operation of, and/or public confidence in the department.”

5 On Your Side received screenshots of the posts in question. They included:

Jan. 5: He posted a link to a story titled, “No charges against Wis. officer who shot Jacob Blake” above a picture of two officers with their guns drawn confronting Blake inside his SUV. Above it, he wrote: “I don’t understand why there would be rioting. The protestors are getting exactly what they asked for. Justice. This is what justice looks like.”

June 10, 2020: He posted a meme of protesters putting their middle fingers in the faces of officers with a quote from conservative radio host Larry Elder, which read: “Maybe it’s the people, not the cops, that need ‘better training.'” Above it, Rummerfield wrote: “Imagine walking up and doing this to any person, other than a police officer, and feeling completely comfortable you are not going to get knocked the (expletive) out.”

June 19, 2020: Rummerfield commented on a story titled: “Boston: Members of midget crime gang suspected of 55 break-ins.” He wrote: “They should throw the book at ’em! A life sentence of hard labor (making lollipops)!”

July 31, 2019: He posted a picture of a man looking outside the door to his house. Above it, Rummerfield wrote: “Me checking outside to make sure I still hate the general public.”

Dec. 21, 2019: Rummerfield posted a picture of black cherry soda next to a bag of barbecue pork rinds while he was eating lunch at Florissant Dairy with the words, “When in Rome…”