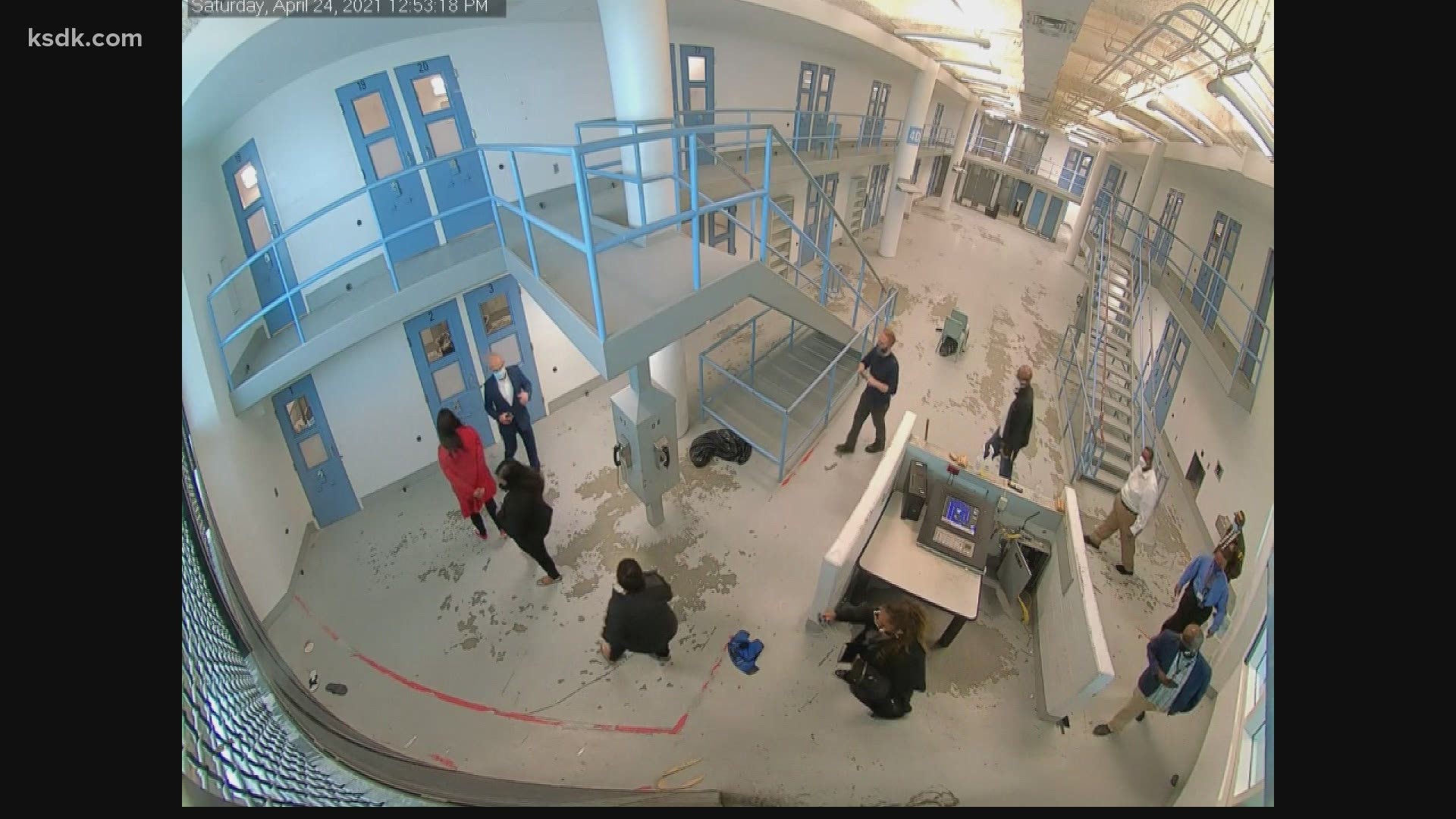 The bugs, according to Congresswoman Cori Bush.

Both women used those phrases to describe what they saw during a tour April 24 of the city’s jail known as The Workhouse. Jones has proposed a budget that will close the facility July 1.

The I-Team requested all of the surveillance footage captured by the cameras inside of the jail. We also requested the footage from their tour of the city’s other jail known as the City Justice Center in downtown St. Louis, where two riots occurred earlier this year.

We wanted to see what Jones, Bush and Circuit Attorney Kim Gardner recently saw during their tours, and we’ve posted all seven hours of the footage from The Workhouse tour here and the City Justice Center here.

The footage the city provided from the surveillance cameras did not show moldy sinks, feces on floors, roaches, piles of trash or filth.

But Mayor Jones’ spokesman Nick Dunne said pictures Jones and Bush posted to their social media accounts show the inhumane conditions both of them observed, including a lack of running water in some cells. He said most of the deplorable conditions the mayor saw were inside the cells – which the surveillance footage did not reflect.

“We weren’t allowed into the cells where they kept detainees, only the empty unit where they were cleaning,” Dunne wrote. “There are some pictures of Congresswoman Bush checking the water quality in the cells.”

The footage showed mostly wide angles of day rooms where detainees can congregate in small groups and eat at tables. The tables, floors and seats appear clean.

The beginning of the tour of The Workhouse showed Jones and about 10 people touring various hallways and gathering spaces throughout the facility. Most of the spaces appeared to be clean and mostly organized aside from some utensils on the floors of one of the dorms.

Watch The Workhouse tour in the YouTube video below:

The tour through the City Justice Center shows the group going through several corridors, a visit to a medical area that looks more like a large desk, a hallway with medical equipment and wheelchairs.

They also pass through one day room that has a basketball hoop, a goal and some exercise equipment that looks like it’s not being used due to pandemic protocols. There are tables overturned on the floor.

The group looked into several more day areas with no detainees around, just large areas with doors and chipped paint on the floors. One cell appears to be open.

Watch the City Justice Center tour in the YouTube video below:

Some of the footage includes audio, but it is difficult to tell what, if anything, was said.

In the final clip, Abbas Alawieh, Bush's chief of staff, talks Jones, Bush and Gardner before they addressed reporters stationed outside. They took only one question from a reporter.

Credit: UPI
New St. Louis Mayor Tishaura Jones exits the Medium Security Institution followed by U.S. Rep. Cori Bush, after touring the facility with other political leaders in St. Louis on Saturday, April 24, 2021. The facility, commonly referred to as the "Workhouse" is the second jail in the City of St. Louis, built in 1966 and has come under fire because of deplorable conditions. Jones, sworn in as Mayor on April 20, 2021, has vowed to close the facility within 100 days of her tenure. Photo by Bill Greenblatt/UPI

Alawieh tells the group the speaking order will be the Mayor, the Congresswoman, Circuit Attorney and ArchCity Defenders board member Kayla Reed.

“There were four uprisings, that’s not normal,” the man said. “And congresswoman, I think you could say, 'After one of the uprisings I stated clearly I want to meet with my constituents who are in that window,' right and 'That’s never been possible … but it’s possible now with Mayor Jones and this is just the first step of many to be taken to make sure that when people are detained they can retain their human rights and their dignity and the respect that they’re entitled…But one thing that’s very clear is those rights are being denied.'”

Jones' chief of staff, Jared Boyd, added: “And we don’t have the answers today, but we’re here to listen.”

Credit: UPI
New St. Louis Mayor Tishaura Jones (L) and U.S. Rep. Cori Bush, talk with a detainee in a cell, during a tour of the Medium Security Institution in St. Louis on Saturday, April 24, 2021. The facility, commonly referred to as the "Workhouse" is the second jail in the City of St. Louis, built in 1966 and has come under fire because of deplorable conditions. Jones, sworn in as Mayor on April 20, 2021, has vowed to close the facility within 100 days of her tenure. Photo by St. Louis Mayors office/UPI

It read, in part: “In general, I think it is a very bad legal idea to have the prosecutor responsible for the charging of all these individuals present for any of this, as it seems like a dangerous exercise regarding due process and the Fifth amendment.”

He then listed the names of 13 inmates his office represents saying he and his associate would be there to provide legal protection for them with the “understanding that this is going forward with or without us.”

He concluded by saying, “I greatly appreciate your willingness to engage and the compassion and thoughtfulness behind the attempt here.”