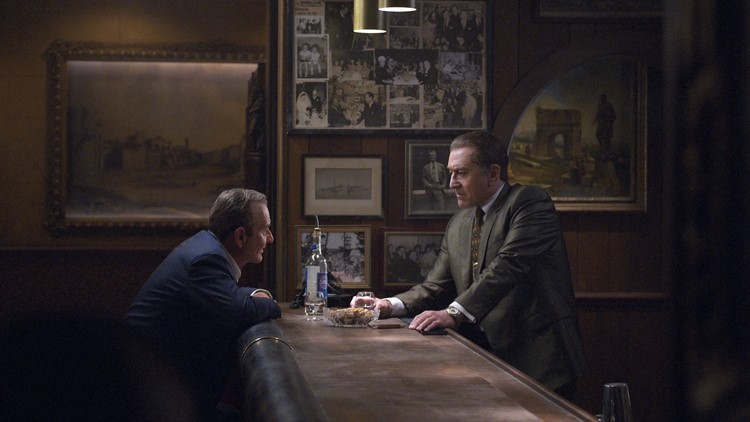 Review | 'The Irishman' is a towering achievement for Martin Scorsese

I thought I had seen everything Martin Scorsese could do as a filmmaker--and then I saw "The Irishman."

He's rewritten the book on powerful epic cinematic experiences once again, showing us a different shade of gangster pale by extending his stroke of genius into the afterglow of their time here, the autumn of their lives.

The Netflix Original film has all the usual Scorsese trimmings and treasures: the show-stopping music, the sudden and impactful violence, and the general sex appeal that he lends to the world of mobsters, usually real-life ones. But with Frank Sheeran's (Robert De Niro in one of his career-best performances) story-one that took him from World War II hero to truck driver to mob hitman-the director has found a new road to pave with his sad, vengeful, and violent regret.

It's a movie that seems familiar at times, even if exotically enjoyable and paramount to our needs for a Scorsese film-but then there are true moments of fresh, authentic rediscovery. A master finding a different combination of brushes or working with a different canvas, delivering something few expected, but even fewer should be surprised by.

It helps to have the best cast in years at your disposal. Outside of De Niro working at his best, plunging the depths of a soul continually losing his conscience, there's the triumphant return of Joe Pesci. Playing the silent yet deadly Russell Bufalino, Pesci will break your heart as a powerful man who had to make the toughest of choices. Bufalino recruited Sheeran for the dirty work that would define both of their lives, and it's a thrill to watch these two create magic on the big screen again. Whether it's discussing the demise of an associate or enemy or simply driving across the country enjoying cereal together, the pair knows how to create sparks with only a couple flares.

There's a scene late in the film between the two that is equal parts uncomfortable, poignant, depressing, and potent. You'll know it when it hits you, like a bullet you can't see coming but know all too well it is meant for you.

Al Pacino, though, gives the performance of the film as Jimmy Hoffa. Many stereotype Pacino as a loudmouth hothead performer who chews scenery, shouts whenever he can, and plows the field of a movie harder and faster than most. Here, though, he changes speeds as the famous loudmouth leader of the Teamsters. Sure, he shouts and stomps, but it's the tender moments of Hoffa's life and Pacino's portrayal that stay with you when the sun comes up in the theater. The fascination with ice cream sundaes, how he connected with Sheeran's oldest daughter, and the principle of his ways.

For example, if you made Hoffa wait more than ten minutes for a meeting, you were insulting him. If someone comes at you with a gun, you charge -- but with a knife, you run. Pacino found a way to make Hoffa all his own in a supporting performance. It's an electrifying event that will also break your heart to watch unfold. Not only did Hoffa think he was above the law, but he also thought he could rule above the mob -- and that is a painful mistake for anyone to make.

The supporting cast is a series of noticeable talents who slip into their roles with the ease of putting on an expensive suit. Harvey Keitel as Angelo Bruno, Bobby Cannavale as Felix DiTullo, Stephen Graham (Al Capone on HBO's "Boardwalk Empire") as Anthony Provenzano, Ray Romano as Bill Bufalino, and so many more.

Popular comedian Sebastian Maniscalco burns with intensity as Crazy Joe Gallo. Anna Paquin probably has about three lines as Sheeran's grown-up daughter, but she makes all the thousand-mile stares count as a woman who gave up on her father. Domenick Lombardozzi, who people will know from HBO's "The Wire" and recently in Showtime's "Ray Donovan, gives his best performance to date as Anthony Salerno, who butted heads with Hoffa.

Everybody is at the top of their game here, trading punches with an award-worthy script from renowned screenwriter Steven Zaillian. The script, adapted from Charles Brandt's best-selling 2004 novel about Sheeran's life, "I Heard You Paint Houses," is a patient uncoiling of facts, thrills, events, and surprises. No one is safe in this world, and sometimes old age doesn't exactly equal paradise. Not for these people. As Paul Newman once told Tom Hanks in the underrated "Road to Perdition:" "There are only murderers in this room-and none of them will see heaven."

That's where Scorsese sets "The Irishman" apart from "Goodfellas," "Mean Streets," and "Gangs of New York." It's the final third of this fast-moving three and a half hour film (trust me, it flies by), where the true power is evoked. Seeing Sheeran in the twilight wrestling with all the bad things he's done, and the haunting quiet of his day to day life. This is where De Niro does his best work in a long time, showing us a lion in the harsh chill of winter, looking at a two way street: one direction staring down his past and the other taking intermediate glimpses ahead. This is where Scorsese's film grips you, holds you, and shakes you.

No filmmaker has ever taken the time and shown this amount of skill in putting an aged mob criminal/killer on display near the end of his life. If there's one magic trick Scorsese has, it's making the audience feel compassion for a bad guy, someone who had taken life and found a way to keep going.

Sometimes, the bullet or knife doesn't get you. Sometimes, a quiet room with your sins can do you in. That's what makes "The Irishman" ascend from greatness to legendary status.

In many ways, "The Irishman" plays like a greatest hits album for Scorsese, a revisiting of all of his famous moments and characters. If you love his movies, you'll adore this film. You don't see this kind of movie every year, or even every decade. There's also something there for the newbies to his realm of film.

It's a master class in acting from De Niro, Pacino, and Pesci. A signature blend of talent that crackles on screen.

The three and a half hours, thanks to expert editing from Thelma Schoonmaker, flies by like a slow-moving reflection of the view behind you. No filmmaker has the patience of Scorsese. He’s diabolical with his minutes here, mixing in plenty of dialogue-driven moments to go with the cold-blooded action. You’ll leave wanting more of this mob ice cream. How can one leave a 210-minute movie wanting more? Scorsese and Netflix, that's how.

What’s different? Once again, the sad cumulative outlook during the finale. The final 30 minutes slows down to show the taxing journey of a mobster’s life as he hits old age.

We are all born in the spring. By winter, we answer for our sins. That’s Frank Sheeran’s story and it’s epic.

"The Irishman" is a towering achievement for Martin Scorsese, who reminded me that there are still a few tricks up his sleeve.

RELATED: 'Frozen 2' Review | While the sequel lacks the spark of the original, it's still a delight

RELATED: Review | 'A Beautiful Day in the Neighborhood' is an engrossing reminder of Fred Rogers' virtue

RELATED: Review | 'The Report' is a taut 9/11 thriller that deserves your attention

RELATED: Trailer Review | Ben Affleck's 'The Way Back' is a powerful display of art imitating life