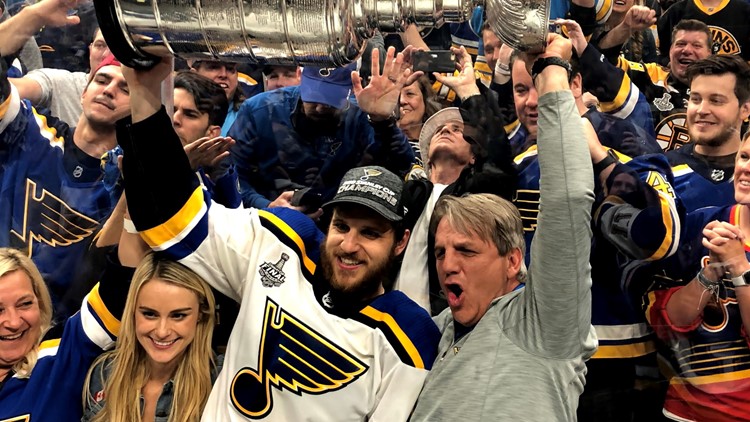 MARYLAND HEIGHTS, Mo. — The Blues can only hope their dads can sprinkle some good juju on them as they headed west for a pair of road games.

The Blues (32-15-8) have stubbed their toes as of late, winning just two of their past nine games (2-5-2) but remain first overall in the Western Conference and the Central Division at 73 points. But that margin continues to dwindle with the Colorado Avalanche breathing down the Blues' necks with 70 points and two games in hand and the Dallas Stars, who overcame a 2-0 deficit to defeat the Blues 3-2 in overtime at Enterprise Center . 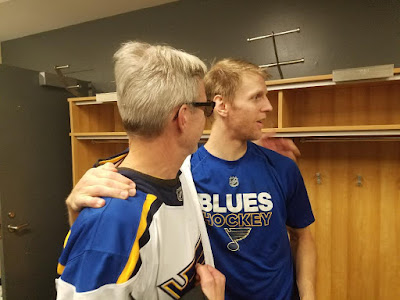 It's understandable that the Blues are in the dog days of the season and playing some tired hockey right now. After all, they've played more games than anyone since the calendar turned to 2019, including 26 Stanley Cup Playoff games en route to winning it all in June.

A little boost from the dads, who are 7-1-0 accompanying their sons on the road, can hopefully bring back some stability when the Blues face Anaheim on Tuesday and Vegas on Thursday.

The Blues could use some good dad karma on the road, where they've really had a tough go of it, going 1-6-1 in their past eight.

"It's fun. They love it," said Blues defenseman Carl Gunnarsson, whose dad Bjorn Gunnarsson will have made each of the five trips. "It's fun having them around, especially now with the core group of guys we have now. The dads know each other and they seem to get along real well too."

Watch: Jordan Binnington talks about getting back on track

The dads, and in some cases, billet dads (Troy Brouwer/Joseph Saliger) and Zach Sanford, who brings college friends, and in this case, Brett Glendye, along because Sanford's father, Michael, passed away in 2018.

The dads hop on the team's chartered flight, stay at the same hotel, sit in on the team player meetings with the coaches and get to spend as much quality time off the ice as possible before each game. During games, they cheer on their sons from suites.

It's been a good recipe in years past.

"The fathers, the dads, whoever's here in the stands for us, it makes you want to put in a solid effort for them," Blues forward Brayden Schenn said, who will be accompanied by his father Jeff Schenn. "We're lucky to have them here. The Blues take very good care of them and obviously love being around us. There's obviously a little bit of side stuff that you do with the dads, but when you come to the rink, you worry about two points and in past years, we've been able to get some wins for them."

RELATED: Blues to retire #44 in honor of Chris Pronger

Do they have a curfew? After all, there is no clock in Vegas!

"I think when they get away from the wives, the moms and whoever, they let 'er go," Schenn said. "They like having fun together drinking some beers and enjoying watching their sons play."

It should be quite an experience for Sammy Blais and his French-Canadian father Sebastien Blais, who will be on a trip for the first time.

"It's nice for him to be coming and see what I'm doing a living," Blais said. "He doesn't speak very good English, so he's going to have to learn it a little bit, but he's really excited and he's a big fan of hockey. It's going to be a nice week for him."

Sebastien Blais won't be the lone non-English-speaking French Canadian along for the ride, so it's not all bad

"[David] Perron's dad [Francois Perron] doesn't speak any English either," Blais said smiling. "They're going to be together all the time, but if he needs help (with translation), I'll be there to help him for sure."

Here is the list of dads/billet dads accompanying the trip with sons: 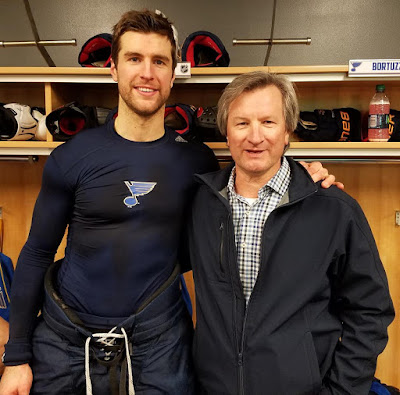 "It's a different mindset with the dads on the trip," Blues coach Craig Berube said. "It's always fun to bring your dads both ways. The dads love it, they love being around the team. We keep them involved in everything, meetings and all that stuff. The players love it too. They love their dads around. They love performing in front of them too. It's good. We need a good road trip here. I think it's good that we're getting away with the dads and heading out to Anaheim and Vegas. It'll be two good games and just need to get back on the winning track."