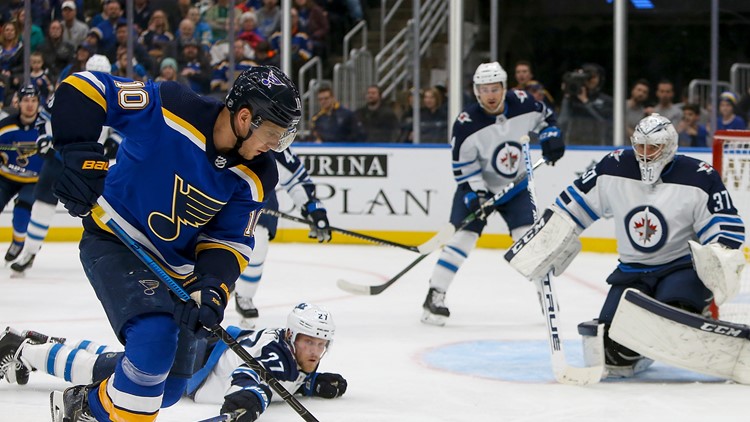 ST. LOUIS — The Blues' 11-game home point streak went 'poof' into the night with a 4-2 loss to the Winnipeg Jets, and it wasn't exactly one of those games where the Jets, desperate in the chase for a Western Conference wild card berth, came in and won a road game by being the better team.

"There's a lot of quality scoring chances for sure," Berube said. "I'll look at it. Maybe we can be at the net a little bit better, but there was traffic there."

"He’s just a big guy, I think," Blues defenseman Colton Parayko said of Hellebuyck. "He’s a good goalie. Just being big, covers a lot of the net. I’m not sure about goaltending too much. He’s good I guess. He’s just big I guess, that’s my big thing."

And on the flip side, it wasn't a good game for Binnington, who allowed a questionable first goal from a sharp angle, high on the short side where he wasn't square to Jansen Harkins, who scored his first NHL goal in a period Berube didn't like by the Blues, and then on Winnipeg's go-ahead goal in the third period after the Blues fought back to tie the game 2-2 in the second, Binnington gave up a whopper of a rebound on a long-range shot by Harkins that the Blues netminder coughed up, ultimately being banged in by Andrew Copp.

"I haven’t rewatched it, but the initial thought there is control your rebounds," Binnington said. "I’ve got to be there and got to keep working and it will come back around."

Binnington has been rock-solid since he burst onto the scene Jan. 7, 2019, and we know what the end result was last season when he put the Blues on his back to help them win the Stanley Cup, and earn himself a contract extension in the summer for $4.4 million AAV. But let's face it, there have been some leaks in Binnington's game as of late.

Since the Christmas break, Binnington is 7-4-1, but his numbers are alarming, to say the least.

When asked about Binnington's game Thursday, Berube wouldn't go as far as to single his netminder out, but did throw him into the group in general.

And not all of the goals allowed recently are on Binnington, but he has allowed goals that normally he would stop. These have been some of the same issues that Jake Allen faced in recent seasons.

It's not being suggested that there should be a goalie controversy, but perhaps Allen deserves more games, and if he runs with those starts, then maybe the job should be split until the Blues can figure out who's playing more consistently heading into the playoffs.

The Blues are not ones to throw anyone under the bus and single people out. They'll always take the high road and put the onus on everyone, which is what Berube said.

"It's my job to make them urgent, and it's their job too," Berube said. "It's everybody's job."

These games from now to the end are playoff-type games. The teams beneath the Blues are fighting for their playoff lives. The Blues were those teams last season. Now they're on the flip side of things.

"There's a lot of desperate teams around the league right now, trying to find their way, playoff spots, things like that," Berube said. "Hockey's tight right now. It's tough. We've got to dig in more. We have to have a better mindset going into games, being harder to play against. It's a lot of playoff hockey going on right now. I'd like to see us get more of that mindset right now."

"I think this time of the year, I feel like a lot of it is opportunities and mistakes and that’s just the kind of hockey it is at this time of year," said Blues defenseman Colton Parayko, whose giveaway led to Winnipeg's second goal but scored a power-play goal. "Everybody’s battling for a playoff spot. Everybody needs two points. It’s kind of a game of mistakes right now and got to clean up a couple of things and we’ll be fine.

"It’s frustrating giving up two points. That’s obviously disappointing. You obviously want to take care of home ice and continue to get points but it’s over, time to flip the page, come to practice ready tomorrow. It’s obviously another big game on Saturday, so you can’t really sit back and look at this game. I think we’ve got to make sure we move forward. This is another huge game Saturday against a really good team. That’s our focus right now and just go get two points." 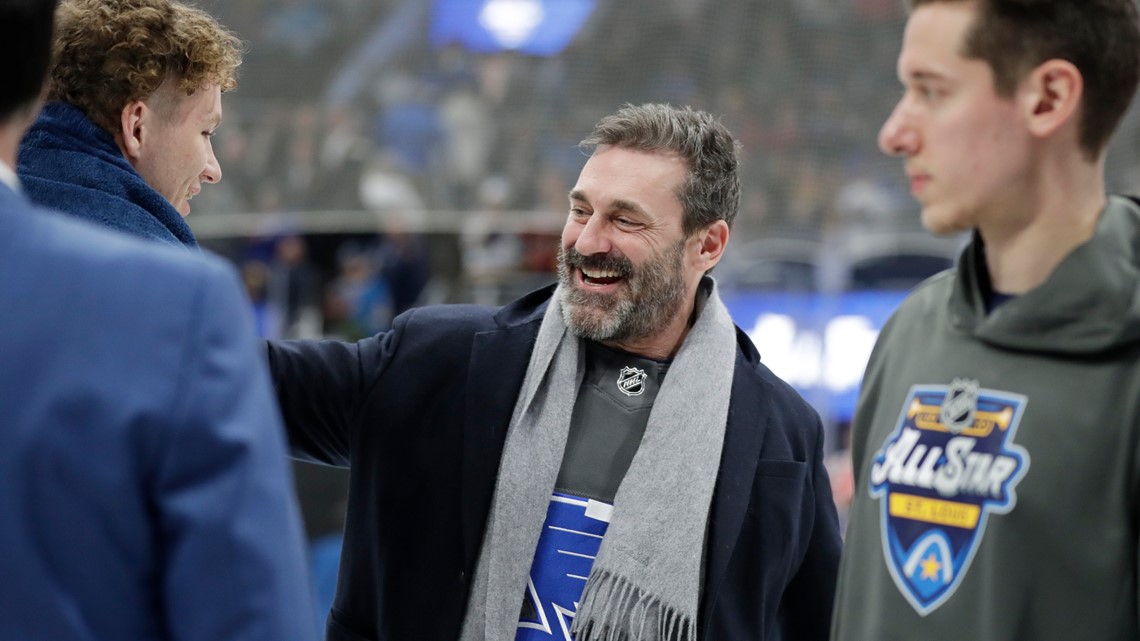 Watch: Jon Hamm narrates 2020 All-Star All-Access mini documentary
ST. LOUIS - Do you wish you could relive the excitement of 2020 NHL All-Star weekend in St. Louis? Well, you're in luck. The NHL has put out its "All-Star Game All-Access" mini documentary on social media, and it's chock full of cool moments.