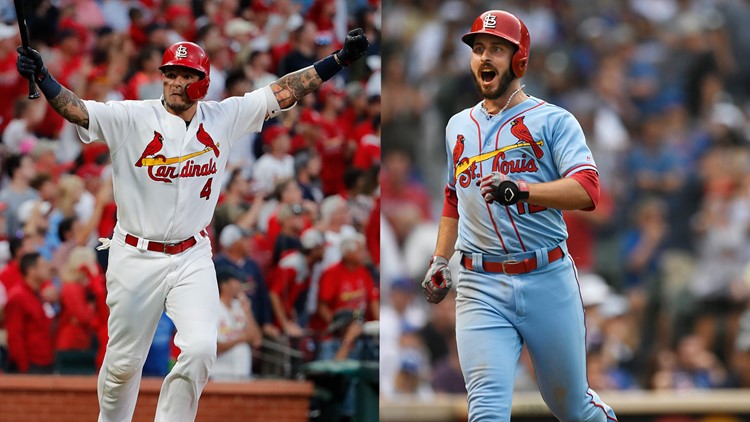 Ranking the best Cardinals games of 2019

ST. LOUIS — The 2019 St. Louis Cardinals were not without some great moments.

But which of their games was the "best"?

Here's what we came up with using three basic criteria

1: Impact of game on season

May 31 - Carpenter walks off Cubs

July 3 - Edman's three run bomb in the ninth in Seattle

In just the second game of his career as a Cardinal, Paul Goldschmidt announced his presence.

Goldy's three home runs in Game 2 of the opening series in Milwaukee showed Cardinals fans right off the bat why their club had acquired the slugging first baseman.

Goldschmidt had four hits, three home runs and five RBI in this one, which was also the Cardinals' first win of the season.

This is the only Cardinals loss on this list, but I felt like I had to include it.

It was a duel for the ages between a future Cardinals hall of famer and a St. Louis born future National Baseball Hall of Famer that lived up to the hype.

In his final start of the season and still possible last start ever as a Cardinal, 38-year-old Adam Wainwright was masterful through seven innings. He got in trouble in the eighth and ended up allowing three runs, but his 11 strikeout playoff performance was still incredible to watch.

Max Scherzer lived up to his reputation as well in his playoff return home going seven innings and also striking out 11 in the win for the Nationals.

This was the start that really proved to us that the Wainwright of old could still shine through in 2019.

Wainwright pitched eight shut out innings allowing just two hits and striking out eight on 126 pitches against the rival Cubs in their first trip to St. Louis of the season. The Cardinals would go on to sweep them in that series.

This game is made even better by perhaps the play of the year by Kolten Wong, who's robbery of Anthony Rizzo with two outs in the eighth got the Cardinals out of a critical jam and fired up everyone in the building, including Wainwright.

It just wouldn't have been right to not include a Jack Flaherty start on this list. Although the Cardinals ended up losing a lot of his great outings, they needed this one most, and the entire team showed up.

On the last day of the 2019 regular season, the Cardinals unleashed fury on the rival Cubs and won the National League Central for the first time since 2015.

The Cardinals scored nine runs in four innings and Jack Flaherty shut out the Cubs through seven on just two hits.

After the craziness of the last few weeks of the season it all came down to the very end, and the Cardinals and their ace showed up when it mattered most to take back the central.

For my money, this was the coolest day at the ballpark all year.

Albert's return was special, and Cardinals fans made sure to play up the moment.

Cardinals' broadcaster Dan McLaughlin really did say it best: "He gave us 11 years of memories we'll never forget. He's just given us another."

5. September 19: Carpenter off Kimbrel in Chicago

This is the first game in that late September series in Chicago making this list, and yes there will be a few more to follow.

This game kicked off one of the craziest series' we've ever seen between the two hated rivals, and it was the guy mired in the worst season of his career who played hero.

The last two innings of this game were insane.

Jack Flaherty pitches his tail off once again with eight innings of one run ball, only to see Carlos Martinez and Andrew Miller unravel all of his work in the ninth.

But in extras, Matt Carpenter wasn't about to let this one slip away. He took Cubs closer Craig Kimbrel deep to put the Cards ahead for good in extras and keep a three game lead in the NL Central.

I saw this game in person, but am still not sure it actually happened.

Ten runs in the first inning of a do-or-die playoff game? Are you serious?

Well, the Cardinals did just that and tacked on three more for good measure to beat the Braves 13-1 in Game 5 of the NLDS.

It was a bloodbath and SunTrust Stadium was completely silent.

Watch: Inside the Cardinals' locker room after winning NLDS

I told you there would be more from this series coming up.

In the finale of that crazy series in Chicago, the Cardinals were down again late. Yu Darvish had shut down St. Louis for eight innings. And then the Cubs sent him back out for the ninth.

That capped off the four game sweep (the first time the Cardinals had done that in Chicago since 1921), officially put St. Louis in the postseason and was the final nail in the coffin for Chicago's season and Joe Maddon's tenure as Cubs skipper.

How much fun was this one? And of course it was Yadi.

Molina tied the do-or-die Game 4 of the NLDS in the eighth on a bloop single over Freddie Freeman and then came to the plate with a chance to win it in the ninth.

He did just that with a sacrifice fly to left that scored Kolten Wong and resulted in a Cardinals mosh pit in short right field.

When we look back on Molina's career, we'll be talking about this game as one of the biggest moments in his storied time with the Cardinals.

Watch: Yadier Molina talks about his walk off in Game 4

1. September 21: Molina and DeJong go back to back off Kimbrel in the ninth in Chicago

The twists and turns in this game with what was on the line are why we love baseball.

You had a questionable call early, lead changes throughout, a Matt Carpenter baserunning gaffe, a clutch Ozuna bomb, the infamous Gallegos "balk", Tony Kemp's backbreaking homer and then Molina and DeJong going back-to-back off Craig Kimbrel in the ninth on consecutive pitches to start the inning.

Whew, I'm out of breath.

Three games from that classic Cardinals/Cubs series made it on this list, and honestly the fourth was a strong contender to break out of the honorable mentions.

The swing of emotions in this one puts it over the top though, with an exclamation point from Molina and DeJong to top it off.

RELATED: The Cardinals biggest off-season priority is improving offense, the question is how to do it