Against the odds, Jake Allen continues to prove his naysayers wrong

The emergence of Jordan Binnington has finally delivered us Allen's ideal calling: a backup, and a solid one at that.

ST. LOUIS — At one point in his career, Jake Allen ranked near the bottom of the league in NHL starting goaltenders. This was two years ago.

I wrote that he was at best, a timeshare goaltender. Someone who couldn't carry the load of an entire season with a team. He was a stunt double instead of the star; Cliff Booth instead of Rick Dalton for 2019 movie fans.

I was blasted for it by a group I like to call "The Jake Allen Apologist Committee." They cited late season playoff runs, half-season gauntlet sprints, and cornered the stratosphere for that perfect small sample size of stats showing me their guy was alright. I laughed, they got mad, and so on.

Here's the truth. He is alright, a perfectly fine timeshare goaltender. The emergence of Jordan Binnington has finally delivered us Allen's ideal calling: a backup, and a solid one at that.

Wednesday night at The Enterprise Center, Allen captained the net for the Blues with Binnington getting a rest. With five more games to play before New Year's Day in just 13 days, both goaltenders would have to be utilized. A season ago, this was the case. Allen was flaming out and Binnington was swooping in for the rescue. It also happened two years ago with Allen and Carter Hutton, or as some fans coined it, "Starter Hutton."

Allen took the net and dominated, restricting the Edmonton Oilers to a single goal on 36 shots. He denied the Oilers on five power plays, stopping eight shots with Edmonton carrying the extra skater. The stellar performance continued a streak of play for the veteran netminder that dates back to Nov. 2. After three rough games to start the 2019-20 season, Allen has posted a save percentage of 93% or better in seven of his last eight starts, including a shutout of Chicago on the road earlier this month.

It's easily the most consistent Allen has been in years. When he enters the net, I don't reach for the Tums. I don't feel the need to ask myself how much chocolate ice cream I have in the fridge and if it's sustainable for a possible shootout affair. When it was announced Wednesday that Allen would start, there were a few Blues faithful that didn't like the move. They wondered where Binnington was. I wasn't a member of this posse. I was content.

Look, for a team with 22 wins on the season before Christmas, it's hard to second guess Craig Berube right now. Every button he is pushing is turning into a golden ticket, including the playing time of a guy named Mackenzie MacEachern, who scored another goal last night. Berube knows exactly what he's doing right now ... well at least when he's not selling trucks on television. The coach of the year finalist hasn't worried about egos or mood swings since he got here, and that's one of the biggest reasons the Blues hung a Stanley Cup banner earlier this season.

Allen getting more time in net only makes him more prepared for a possible long stay in net should the net arise. Any Blues fan who has followed Allen or the sport itself knows comfort in net with five guys bearing down on you helps. He needs the space in his head to know success is attainable on any given night, not just on the road. That's where Allen has dominated, owning a 2.21 goals against average (GAA) in eight starts this season.

For a Blues team currently (and forever) constructed on great goaltending and brick wall defense, they may need both Binnington and Allen for the stretch run. As miraculous as the former can be, no one should be expected to start over 60 games on a season. If Binnington does that, schedule knee replacement surgery by April. This way, each guy challenges the other, but most importantly, Allen remains engaged and ready.

I don't know where this will lead. He may break your heart again, causing a massive revolt and an oncoming surge from "The Jake Allen Apologist Committee." Things can still go south. After all, it's only December.

Maybe, he'll maintain footing in a role that he was made for: backup goalie, and a pretty good one. A line of work where you a guy doesn't have to be Rambo, merely the one who carries the bazooka on occasion. The guy who fills in. That's what he's been since the calendar year started.

Against all odds, Jake Allen is proving a lot of naysayers, including yours truly, wrong. With every shot sent his way, every breath I take ... is quickly followed by another. But the difference is, the collapses are currently missing in action, so my rage level stays low.

You can consider this a Jake Allen appreciation post. The last thing I thought I'd be writing when the year started out. That's sports for you.

Thanks for reading and tip your writer with a share. 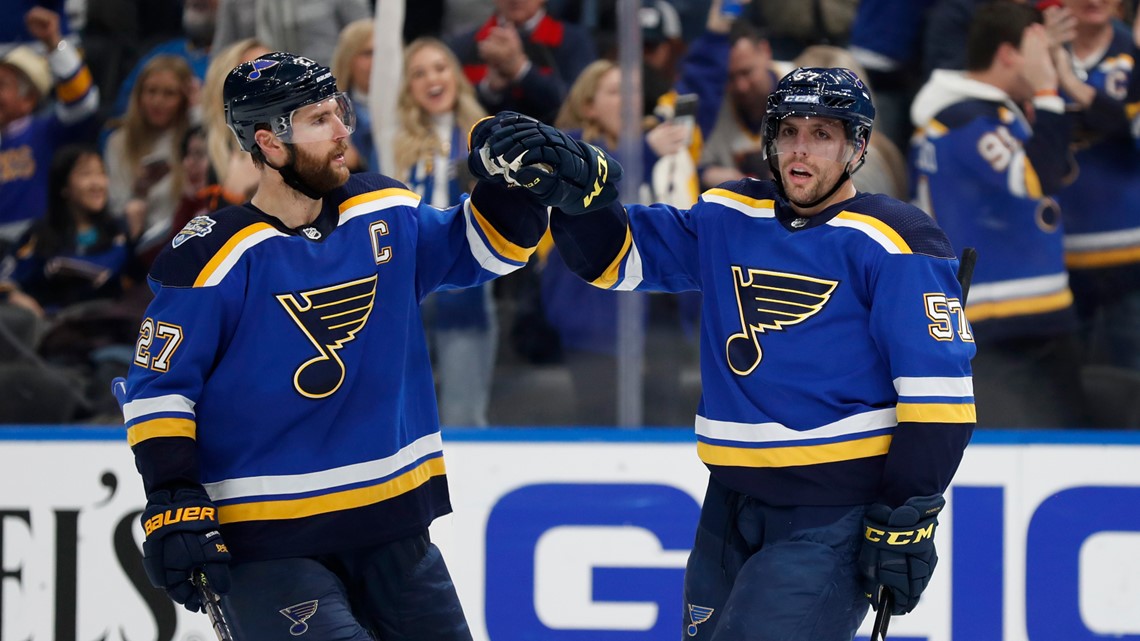 Blues shake 3-game slide, sweep 4-game homestand with structure, goaltending, timely goals
MARYLAND HEIGHTS, Mo. - A little home cooking went a long way in helping cure some ails in the Blues' game. When they limped home following a 5-2 loss at Buffalo that produced the first three-game losing streak in regulation in more than 13 months, the Blues (22-8-6) did what they normally do best: nip it in the bud and get back on the winning track.

RELATED: What's a little snow when your team takes on the (Colorado) Avalanche?