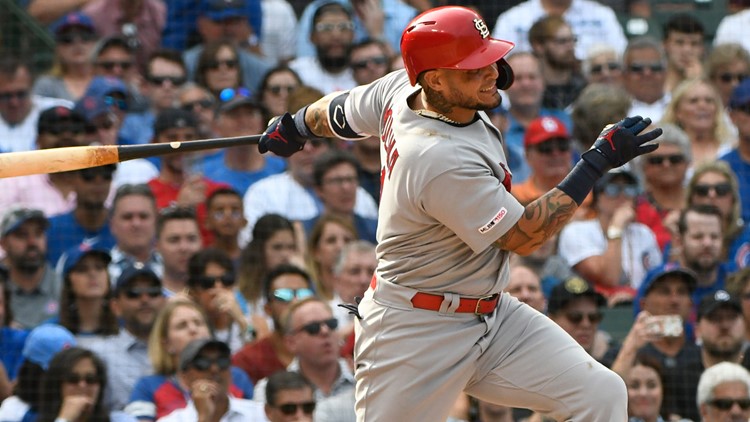 CHICAGO — Stop me if you've heard this one before.

Yadier Molina came up big when his team absolutely had to have him. Imagine that.

Without Friday's effort from Molina, that Cardinals would be looking at a tied series in Chicago, instead of being up with a commanding 2-0 lead and five game lead on the Cubs.

Not only did Molina drive in the Cardinals' only have three of the Cardinals four hits in the game and skillfully lead the pitching staff through an impressive showing, he put his toughness on display once again.

Molina shook off a nasty Jason Heyward foul tip in the fourth inning of Friday's game that would've sent most catchers to the locker room. But for his teammates and coach, it was no surprise the 15 year veteran was able to brush it off.

"If you're gonna have a tap out contest, I'm not betting on him (tapping out)," Cardinals manager Mike Shildt said. "There's warriors and there's gladiators, and whatever that is he's every bit of that. That's the toughest smartest guy I may ever know."

"He's got an intuitive nature about baseball that I think is extremely hard to find even among people that have been in the game as long is he has," Cardinals reliever John Brebbia said. "It's a special thing to have someone like that behind the plate."

Watch: John Brebbia is impressed by Yadi every day

The 37-year-old veteran has enough clutch moments in his career to fill a hall of fame highlight reel already, but he added another big moment in the sixth against former teammates Steve Cishek.

His two-RBI single off the sidearmer were the only runs the Cardinals could muster. But we've seen this movie before.

"It feels like every day something happens where I go, 'Oh man, I thought this guy was good', and then here he goes showing us how good he is one more time, one more time and one more time," Brebbia said. "I think gladiator is a perfectly acceptable way to describe him. He's definitely a gamer. He's a brother to everyone one the team and it's hard to put into words just how much he can effect a game."

But when you ask Molina, it's never about him. It's only about one thing. Winning.

RELATED: The good times return for the Cardinals at Wrigley Field in timely fashion

RELATED: In midst of disappointing season, Matt Carpenter gave us the moment of the year

RELATED: From ‘alley ball’ to the Cardinals, Tommy Edman continues to meet the challenge and prove he belongs