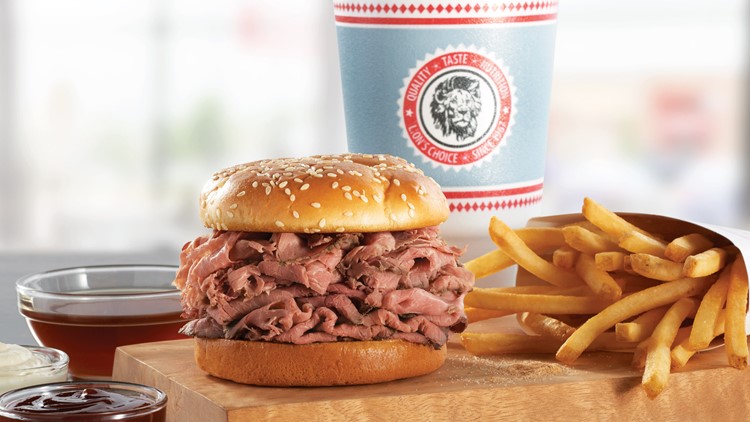 Lion’s Choice: Led with pride by a guy who gave up his dream retirement life

This story accompanies the Abby Eats St. Louis podcast episode called 'Ode to Lion's Choice.' Click here to listen to the full episode or download it from your favorite app store.

ST. LOUIS — Wearing a suit while sitting at a table in a Central West End Lion’s Choice isn’t exactly what Michael Kupstas pictured for himself at this point in his life.

He’d had a seat at the head of the conference table at Panera Bread Company. Then, he retired. He and his wife made their favorite vacation spot in Maine their permanent home and even opened up an upscale restaurant.

“We won one of the best new restaurant awards in the state of Maine in 2015, which was pretty exciting,” he explained to Abby Llorico during a recording for the Abby Eats St. Louis podcast.

But Kupstas and his wife never really left the Lou behind.

After a lot of back and forth (remember, he was living that #RetirementLife in Maine), literally cooking French fries at the Hanley location and also talking with employees who’ve been with the chain for more than 40 years, Kupstas knew he wanted in.

“When you cut through it all and realize that you're offering one of the most unique product offerings in fast food branding, it was compelling enough for me to say, okay, let's give this a try,” he said.

What makes Lion’s Choice so unique?

The founders of Lion’s Choice wanted to feed families when they opened their first location in Ballwin back in 1967. (Side note, if you ever hear anyone refer to it as Red Lion, that’s what it was originally called back in the day.) With more families becoming two-income households, it left some room on the table for something in a paper bag.

“Husbands and wives were trying to find ways to provide good, healthy food alternatives in a quick format that allowed them to still feel good about the food folks were eating. And they settled on roast beef ‘cause they felt like who wouldn't want to serve a family roast beef from Monday through Sunday of the week?” Kupstas explained.

Since then, the beef has been slow roasted in store every day for at least three hours. It’s sliced to order on a toasted bun and served with a dash of seasoning.

“It’s secret. It’s a secret deal,” Kupstas said before we tried to pry even a morsel of the hidden recipe out of him. “It’s just, it’s a delicious combination of secrets.”

Okay, so we couldn’t get the CEO to crack about LC’s secret seasoning recipe. But, he did remind us that you can now buy it in stores, so you can season whatever you want to your heart’s desire.

Keeping pride in St. Louis roots, while evolving the brand

While you can walk into a Lion's Choice and get the same quality meal you've known to expect, you might also find some new items on the menu to tempt you.

“It’s important for us today to make sure that we're giving not only the great product and great service that we've been known to have in the brand, but new reasons to come,” Kupstas said.

Over the last year or so, Lion’s Choice has been testing breakfast items and adding salads, new sandwiches and combos, along with trying meatless and meat-alternative options.

“Adding new products […] brings some energy and excitement to the brand,” he added.

Hungry St. Louisans also can find Lion's Choice in the frozen section of the grocery store. The chain has partnered with 4 Hands and Mama Lucia's to be the newest edition to the frozen pizza line.

Can Lion’s Choice be the next ‘St. Louis Bread Co.’?

Meaning, can this fast-food joint that started as a St. Louis thing expand beyond the Gateway to the West? In some ways it already has, with locations in Kansas City and at Mizzou’s sports facilities.

But Kupstas has an appetite for more.

“I think that's the reason I'm here, right, is to help […] prove that this is something bigger than just the St. Louis brand,” he explained. “But, yeah, we believe it can, it can be something.”

And he’s not too worried about people sinking their teeth into another fast-food roast beef option.

“I think it's the product that makes it so unique. It’s that you can't find roast beef everywhere, right? And it goes right back down to the core. Don't grind it and chop it. Sear it, roast it and slice it. That’s what we're banking on. And that's what we believe. And I think that's why we have survived 52 years in St. Louis.”