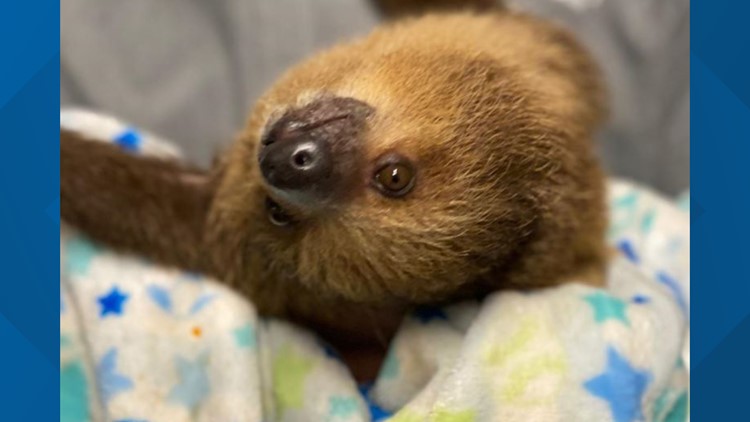 Coconut is a 'Linnaeus's two-toed sloth.' She will celebrate her first birthday on Feb. 20.

She came to the aquarium from another zoological facility and was born in human care. Coconut currently weighs a little over 2.5 pounds. She sleeps about 20 hours a day, which is normal for a young sloth, a spokesperson from the aquarium said.

Coconut is calm by nature, but she gets active and impatient when she knows it's time to eat, according to her animal care managers.

The animal care team members are spending time allowing Coconut to literally hang on them for the next couple of years to mimic their natural behavior. Sloths are primarily solitary, but young sloths stay near their mothers for the first 1-2 years and remain close for up to 4 years.

How you can see Coconut at the St. Louis Aquarium

Coconut is an animal ambassador at the St. Louis Aquarium at Union Station. The aquarium said employees will bring out animals every day ranging from sugar gliders and turtles to snakes, skinks and hissing cockroaches. The animals enhance visitors' experiences and create an educational opportunity for the aquarium's guests.

All of the animals need time to settle into their new home after moving into the new aquarium. The trainers are working with Coconut to establish relationships with her based on trust. Ultimately, she will make regular appearances, but with animal welfare being the number one concern at the aquarium her appearances will be random for a while longer until the animal care managers feel comfortable that a stable foundation has been established,” a spokesperson for the aquarium said.

In the wild, sloths live in rainforests in South America. Their predators include ocelots, jaguars, eagles and anacondas. Although known to be slow, sloths will use their very long, sharp teeth and long, sharp claws to defend themselves, if necessary. Their fur varies from gray-brown to beige, but in the wild it generally develops a green color due to the algae that grows in their fur, which also aids in camouflaging the sloth in the trees.

Sloths live in the treetops almost their entire lives and only come to the ground once a week to use the restroom. They primarily eat leaves, twigs, fruit, and flowers. They digest their food extremely slowly and one meal can take up to a month to make its way through their system.

Sloths in human care are known to live to about 30-40 years, while sloths in the wild generally live less than 20 years. Sloths usually reach a weight between 8-18 pounds and are between 23-28 inches in length.