McCloskeys' attorney said it is unprecedented for a prosecutor to discuss a case in campaign materials. However, dismissals of local prosecutors from cases are rare 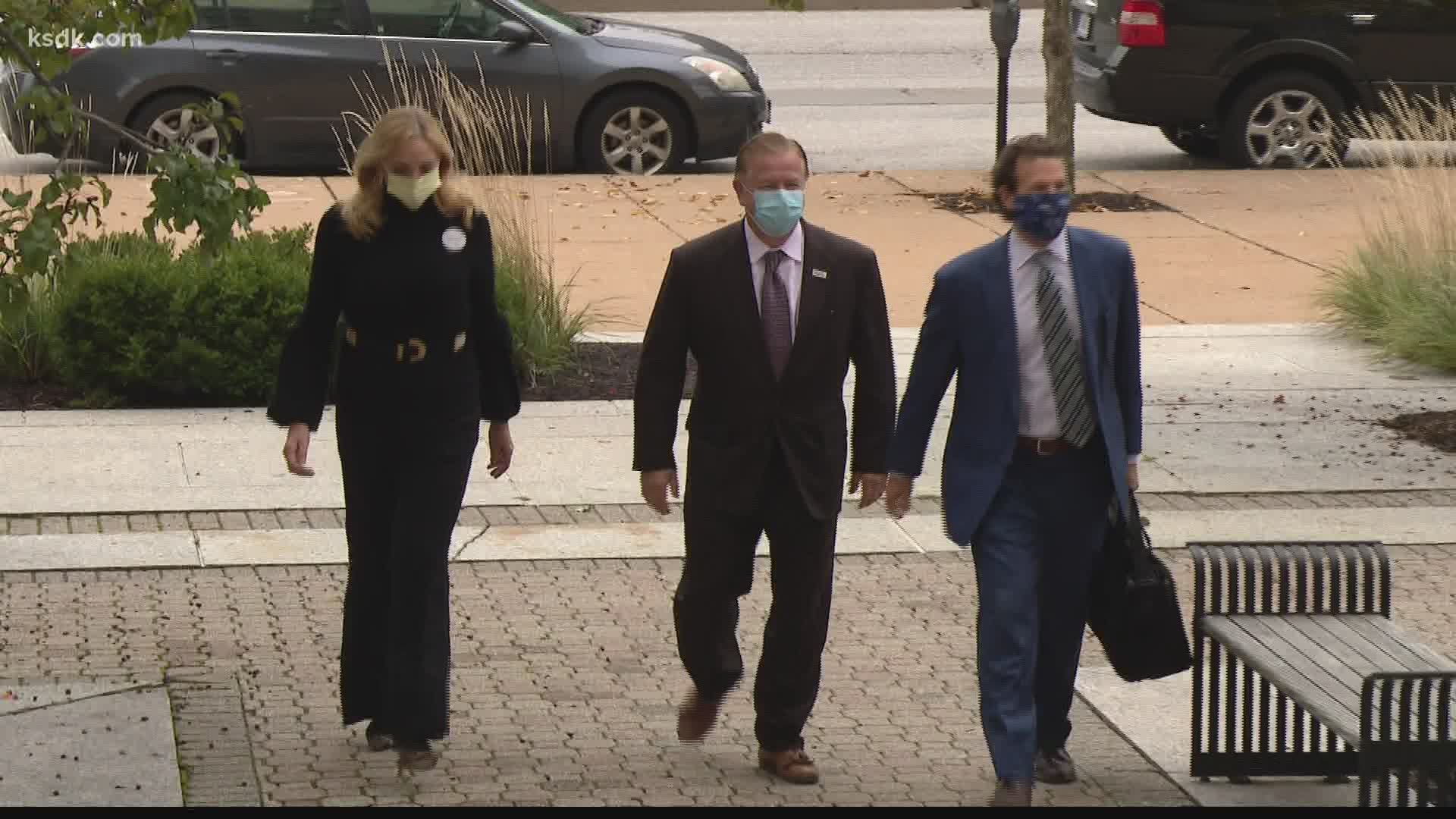 ST. LOUIS — The McCloskeys appeared in court Wednesday afternoon as their attorney argued why he believes Circuit Attorney Kimberly Gardner -- and her office -- should be disqualified from the case.

Attorney Joel Schwartz filed a motion in July seeking to dismiss Gardner from the case, saying, in part, she referenced the case in campaign emails before she ever charged the couple with a crime, and after she did so.

In her response, Gardner wrote: “To suggest the emails decrying attempts to stymie ordinary and fair prosecutorial process evidenced a financial or improper personal interest in the outcome of this specific case or any other improper motive tied to this case is stretching the content beyond reasonable limits. Moreover, any such suggestion is consistent with a pattern of prior efforts to attack the Circuit Attorney that began long before the charging decision.”

Mark and Patricia McCloskey captured national attention after images of the couple pointing guns at protesters went viral. Republicans from Missouri’s governor’s mansion, the attorney general and U.S. senator as well as President Trump weighed in with their opposition of Gardner’s pursuit of charges against the couple.

RELATED: Byers' Beat: What’s happened and what’s next for the McCloskeys

Schwartz and Gardner’s office argued their motions before Judge Thomas Clark Wednesday. Schwartz said he expects Clark to rule within the next few weeks.

Should he rule in the defense’s favor, a special prosecutor will be appointed to handle the case.

The couple also had a status hearing scheduled Wednesday in which Judge Michael Stelzer set a new hearing for Dec. 10.

Assistant Circuit Attorney Chris Hinckley asked Stelzer to seal some portions of the documents in the case that explain how warrants are processed.

Stelzer ordered Hinckley to enter a formal motion on the matter saying, "That's not enough to get you there pal," to Hinckley's arguments to seal the public documents.

Hinckley's involvement in the case is also part of the McCloskey's motion to dismiss Gardner and her office from the case.

On Wednesday, Schwartz noted Hinckley interviewed witnesses in the case before detectives did as well as ordered crime lab workers to fix Patricia McCloskey's pistol. 5 On Your Side reported in July that the gun was inoperable when it arrived at the crime lab.

Schwartz argued Hinckley's actions make him a witness in the case.

Hinckley appeared in court along side Assistant Prosecutor Rob Huq, but Gardner did not attend.

Clark did not rule on Huq's request for a hearing to establish whether Hinckley is a fact witness in the case. But he chuckled when Schwartz said, "Judge, this is like moldy cheese and it stinks," when referring to the fundraising emails and Hinckley's conduct.

Dismissals of local prosecutors from cases are rare.

In her motion, Gardner explains why.

“Courts have been ‘unreceptive if not hostile’ to attempts to disqualify prosecutors from a specific case,” she wrote.

She continued: “Depriving an elected prosecutor of her constitutional authority over criminal cases is anti-democratic.”

Schwartz has since responded to Gardner's motion, accusing her of misstating the case law regarding disqualifying prosecutors.

He continues: “This court is not called upon to rule whether Gardner has an improper motivation, but rather whether she has created the appearance of impropriety.”

Gardner also wrote that she has received death threats from people opposed to her decision to charge the McCloskeys with a crime and that the campaign emails mentioning the case were done merely to defend herself from attacks from conservative politicians.

“Nothing in either of the two campaign emails the defendant complains about approaches the type or level of misconduct needed to remove the CAO or her entire office,” she wrote. “The defendants make no argument of an actual conflict of interest that would require a prosecutor be removed from the case.”

In his response, Schwartz repeats how Gardner's interpretation of the law regarding disqualifying prosecutors is wrong.

“At trial, the standard for disqualification is whether a reasonable person with access to all the facts would believe that there is an appearance of impropriety,” he wrote.

Schwartz also notes how unprecedented it is for a prosecutor to discuss a case in campaign materials.

In Vermont, in 1980, a prosecutor was disqualified for commenting in a campaign advertisement that he would vigorously re-prosecute a case on remand.

In a 1985 California case, a prosecutor was not disqualified when he went on a radio show and commented on peculiar conduct by a defense attorney.

In 1987, the West Virginia Supreme Court noted a prosecutor’s ads were “ill-advised” but not grounds for disqualification. In that case, the ads focused on why a witness had been granted immunity.

“The novelty of the issue suggests that such conduct is obviously and patently inappropriate,” Schwartz wrote.

He also slammed Gardner's Assistant Circuit Attorney Christopher Hinckley for pushing the McCloskey case to the top of the pile of pending cases in her office.

"There are currently some 1,200 cases pending in Gardner’s office. About 150 of them are uncharged Unlawful Use of a Weapon cases, some dating to earlier this year. Yet Christopher Hinckley repeatedly requested the investigating officer accelerate this particular case,” Schwartz wrote.

5 On Your Side reported in July Hinckley ordered crime lab workers to fix Patricia McCloskey's pistol because it was inoperable when it was given to police.

In his motion, Schwartz also notes Hinckley is now a fact witness for trial -- further bolstering his argument to have her and her office dismissed from the case.