Advocacy groups and public defenders say a lack of COVID-19 protocols, running water and unsanitary conditions led to the revolt; they're demanding a tour 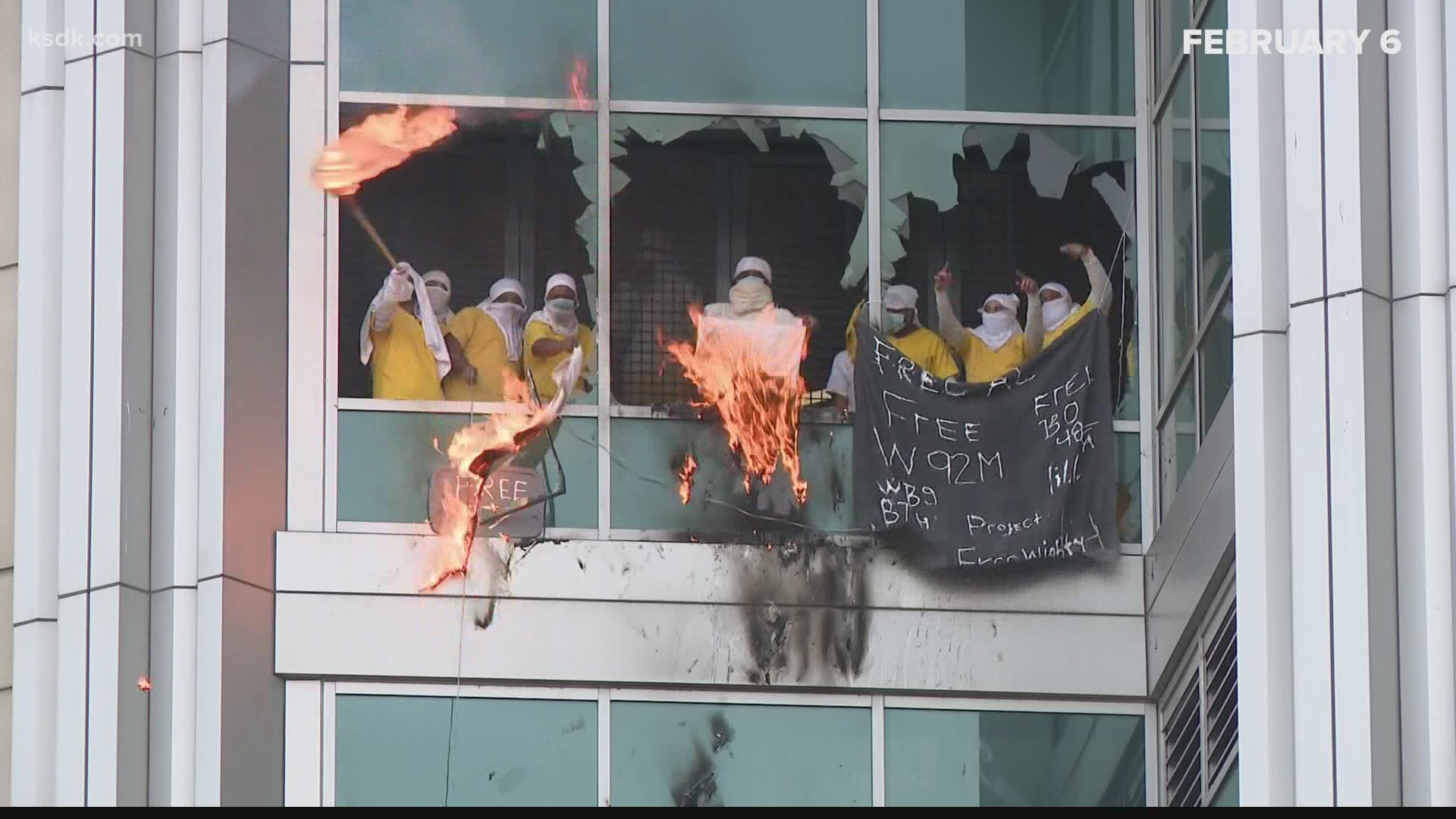 ST. LOUIS — Dueling letters between city officials and inmate advocacy groups about conditions at the St. Louis City Justice Center lay out starkly different pictures of what life is like on the inside, and, what led up to a recent violent revolt.

They demanded a tour of the facility and verification that the city is providing access to food, clean drinking water, mattresses and bedding within 24 hours.

“By now, the whole country has heard about the chaotic situation at the City Justice Center, where, for a fourth time since December, people detained at the jail have protested inhumane conditions there,” according to the letter. “This ongoing crisis demands immediate action.

“Although the City has stood behind its statement that conditions at the city jails are fine, that characterization is belied by the numerous accounts of incarcerated people who have bravely stood up and spoken out, desperately trying to bring attention to their situation and demand they be treated humanely.”

Read the full letter in the document below:

“Although your letter is clearly intended to spread a false narrative, I will indulge it with a response in order to set the record straight,” he wrote. “The incarcerated rioters referenced in your email committed felony crimes when they attacked a corrections officer and vandalized portions of the Criminal Justice Center on Feb. 6.

“The rationalizations suggested by your group for this criminal conduct are simply false.”

Detainees on the fourth floor of the city’s downtown facility lit fires, broke windows and threw furniture onto the sidewalk below Saturday. The city houses about 200 federal prisoners on that floor.

In a news conference after the riot, Edwards said the locks at the jail have not been working properly.

Garvin’s letter did not address the lock issue, but neither did the letter from the advocacy groups.

They claimed detainees, their lawyers and family members have been “desperately” trying to access their loved ones; COVID-19 positive people or those who are sick and awaiting test results are mixed in with the general population and some have not been able to get tested; people are often without soap or even running water to wash their hands; since the “protest,” some people at the jail have gone more than 72 hours without food or water while other floors are getting insufficient food; people are sleeping on sewage covered floors because toilets are turned off; there is little to no heating in the city’s Medium Security Institution known as The Workhouse.

“These conditions are amoral and put every person detained at risk of serious harm or even death,” according to the letter.

Read the full letter in the document below:

Garvin said the only time water is “turned off” is when detainees clog their toilets with clothing and flood the jail floors, and those who do so are given schedules when their water will be turned on. Meals are provided to all detainees, including special menus for those who are diabetic, lactose intolerant or vegetarians. Every cell has a toilet-sink unit, which gives detainees access to drinking water and a new automated heating system was installed a year ago with the temperature preset at 72 degrees.

“Contrary to your unsupported allegations, CJC staff observes detailed and rigorous protocols to protect detainees and corrections staff from the COVID-19 virus,” he wrote, adding that every detainee quarantines for 14 days upon admission, they get masks and nurses rotate through each unit three times a day providing COVID-19 tests if asked.

“Your careless accusations are an insult to the corrections officers, nurses and doctors who have worked diligently and successfully to protect the health and safety of detainees at CJC and MSI.”

Garvin added the jail staff is “currently focused on assessing and repairing the damage caused by the rioters.”

“We do not plan to provide tours of the facility,” he wrote.