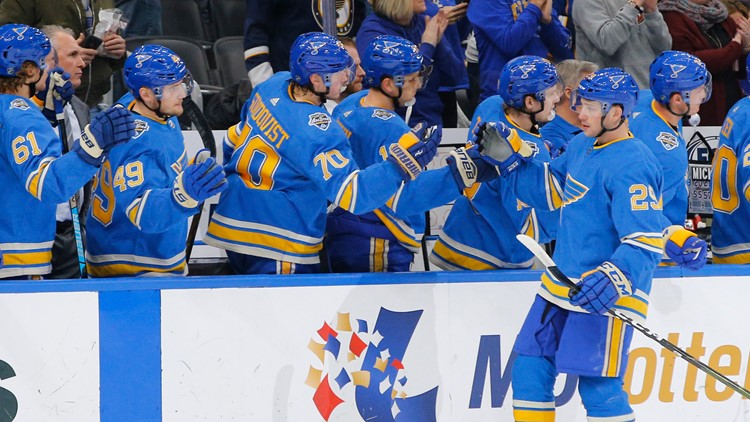 Photo by: AP
St. Louis Blues' Vince Dunn is congratulated by teammates after scoring a goal against the New York Rangers during the first period of an NHL hockey game Saturday, Jan. 11, 2020, in St. Louis. (AP Photo/Billy Hurst)

Defensive depth paying off for Blues

ST. LOUIS — With a win on Monday night the St. Louis Blues would tie a franchise record for the most consecutive wins on home ice. The record was set in 1991.

There are multiple reasons behind the Blues success, but the biggest is depth. It’s what carried the team to a Stanley Cup title, and it hasn't disappointed this season either.

"It's been the story line all year," Blues forward Brayden Schenn said. "Everyone's stepping up, everyone's scoring goals. All lines are scoring. We're built as a team in here, and we don't rely on a couple guys to get the job done every night. We need everyone, and that's how we're winning hockey games."

Three of the five goals in the Blues 5-2 victory over the New York Rangers on Saturday came from Blues defensemen Vince Dunn and Robert Bortuzzo, and Blues forward Zach Sanford. Three names that aren’t regularly tallying goals for St. Louis.

Secondary scoring is a prime example of the depth through all four lines, but the depth goes throughout the entire roster.

Blues defenseman Colton Parayko will miss his fourth consecutive game on Monday due to an upper-body injury. That’s the same amount of games he’s missed throughout his NHL career in entirety.

It would’ve been normal to assume the Blues would take somewhat of a blow from losing Parayko from the lineup.

A six-foot-six defenseman who skates like the wind, logs 22 minutes of ice time on average, plays a role on both the power play and the penalty kill, and can release a bullet from the blue line to contribute offensively is a big piece to lose.

But, the team hasn’t missed a beat. Parayko’s absence gave Nikko Mikkola the opportunity to make his NHL debut. Mikkola was a name surfacing from the AHL for months as an equally large defenseman who uses his size to his advantage.

Blues head coach Craig Berube made it clear that Mikkola needed to play a simple, physical game to remain in the lineup. And that’s exactly what he’s done.

“We definitely miss his (Parayko’s) presence,” Dunn said. “I think Mikkola’s done a great job for us. He looks very comfortable for us out there. He’s not trying to make highlight reel plays. He’s playing very simple, and he’s very effective out there. He’s a big guy and he uses his size and his stick to his advantage.”

Berube announced Monday that Blues defenseman Carl Gunnarsson is indeed healthy and available now. But, there’s no need to mess with a lineup that’s clicking.

“What we say to Gunny is ‘You got to be patient right now,’ and it’s hard for him,” Berube said. “He’s a veteran guy that’s played real good hockey for us, and he’s played in the league a long time. And it was unfortunate, his injury and things like that. But like I said, it’s going pretty good right now back there. So, we’re just gonna leave it the same.”

All lines will remain the same from Saturday. Jake Allen will start in net giving Jordan Binnington a night of rest.

RELATED: Why it's been so difficult for Vladimir Tarasenko to sell this St. Louis home