He's the original king of the bat flip and the author of one of the most improbable World Series home runs in history. We catch up with Tom Lawless. 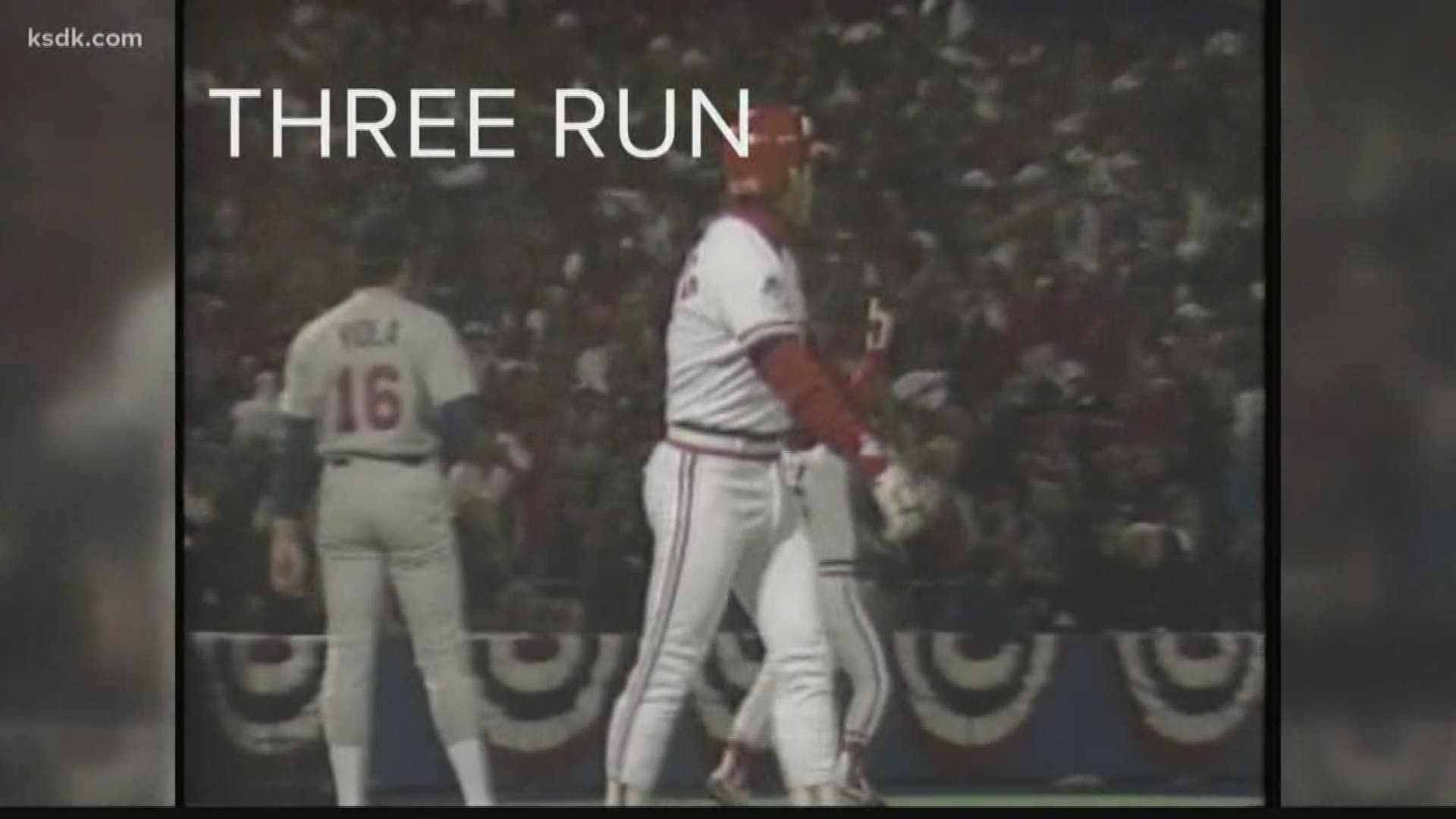 ST. LOUIS — Hitting a World Series home run is a dream millions upon millions of kids have had growing up.

In Erie, Pennsylvania, young Tom Lawless had that dream, too. And the former Cardinal made it come true.

Before October 21, 1987, Lawless was a utility infielder known only to trivia buffs. As in: Who was the only player ever traded for Pete Rose, baseball’s all-time hits leader?

In fact, Lawless only had one home run before stepping to the plate in Game 4 of the 1987 World Series. It was in 1984 at Atlanta, playing for the Cincinnati Reds.

The 1987 Cardinals' infield was set with Jack Clark and his 35 homers at first base, Tom Herr at second, Ozzie Smith at shortstop and Terry Pendleton at third.

Lawless had played 19 games all season, with 25 at-bats and just two hits.

But then came his turning point.

“In the playoffs, Terry hurt himself swinging in batting practice,“ Lawless remembers now in 2019. “He could swing from the left side, it didn’t bother him, but from the right side he couldn’t.”

Lawless, a righthanded batter, played in three games of the NLCS against the Giants and got two hits in six at-bats. Pendleton was still ailing when the World Series began against the Minnesota Twins, so Lawless was pressed into duty again. And with a lefthander, Twins ace Frank Viola, set to go in Game 4 at Busch Stadium, Lawless was in the lineup.

“The opportunity to play in a World Series... you don’t really want to do it because somebody’s hurt, but it is what it is so you go out and do your best," Lawless said. “It’s the ultimate. It’s the Super Bowl of baseball.”

Things didn't get off to a flying start for Lawless in the World Series. He was 0 for 3 with two strikeouts in Game 1, and he struck out looking in his first at-bat in Game 4.

“You know what he’s (Viola) got,” Lawless said. "And I’d faced him in spring training. It’s hopefully picking out a pitch and hoping you can get it.”

The game was tied at one in the fourth inning when catcher Tony Pena walked. He went to third when Jose Oquendo lined a base hit to right field. Cardinal fans were loud and waving white towels on this cold night (47 degrees at game time) as Lawless came to the plate.

“Okay I’m going to bunt them over because I could bunt," Lawless said he was thinking as he walked from the on-deck circle. He waited for the sign to come from Whitey Herzog in the dugout, only the sign didn’t come. “I look in the dugout (and) Whitey isn’t doing anything. I’m saying, ‘Oh boy.' Okay.”

Viola threw a pitch over the plate that Lawless watched go by. Strike one.

Clark, known to all as “The Ripper,” was one of the best fastball hitters of his generation, and so his advice ran along a similar track.

“Just get up there and look for a fastball. When he throws it, if it’s a strike be ready and just get the barrel on it," Clark said.

So now behind in the count, Lawless readied for the next pitch.

Viola went with a fastball and it came in belt-high.

On the radio side, Jack Buck picked up the flight of the ball. “Way back at the track, it’s a three run home run for Tom Lawless. That is hard to imagine.”

Former teammate Andy Van Slyke was watching from behind home plate. “I thought, I hope he got all of it, because he doesn’t do this very often," Van Slyke said. "It went over by three feet, by the way.”

What came next was unseen on the television broadcast and probably to everyone in the park watching the ball.

Lawless flipped his bat in the air, eight to ten feet at its apex. Bat flips are commonplace now, escalating in performance and effect by the year, but this was a new thing.

Not only did Major League Baseball rate Lawless’ flip as the best in the game’s history back in 2018, they added, “Not only does Lawless admire his work, but he also sets the bat-flip standard for decades to come.”

Lawless took heat from the Twins locker room after the game, Viola leading the way. He felt the new Redbird slugger was showing him up. Not so, says Lawless.

“I wasn’t showing anybody up. It was just the excitement of what just happened," Lawless said. “You just do crazy things because of the moment. If you don’t celebrate and you don’t show any emotion then you’re not having fun.”

Minnesota ended up having the last laugh, winning the series in seven games. Lawless finished up with the homer being his only World Series hit in ten at-bats.

Viola and Lawless never discussed the home run face-to-face until many years later, when Roger Clemens saw an opportunity for a practical joke.

Lawless, by this time, was working in the Houston Astros organization. Clemens, by then a special adviser with the Astros, set up a golf outing and invited Lawless along and then mentioned he’d brought someone to join their foursome.

“We walk up to the first tee and Frank comes walking out. He’s got a bat in his hand and he’s ready to hit me with it," Lawless chuckled. “He’s going through the whole shebang of it all and I go, ‘Roger, really?  Really?  This is who you bring?' And for eighteen holes we had a blast.”

Lawless played in the big leagues until 1990. He hit one more homer, against the Reds again, believe it or not, and finished up with a career average of .207. But his turning point on that October night was one he could share with the young players he coached and managed, giving him a forever teaching moment.

“When you walk up to home plate you have a chance. You have a bat in your hands, you have a chance," Lawless said. "No one can take it away from you, what you’ve done. To hit one was a big deal, especially in the World Series.”