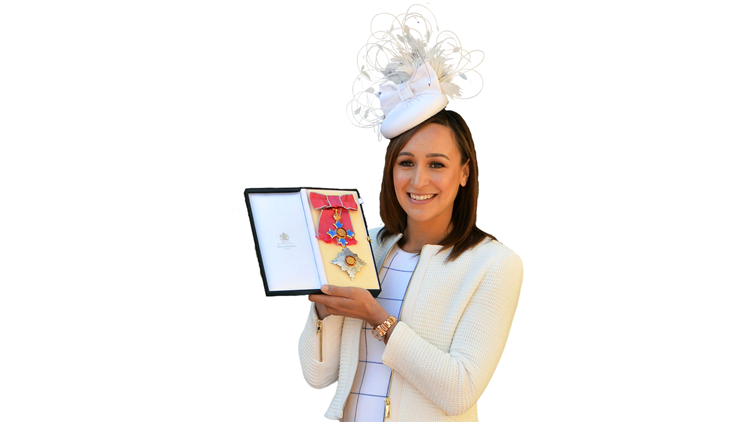 Photo by: AP Images
Jessica Ennis-Hill, athlete, holds her award after receiving a CBE from Britain's Prince William, the Duke of Cambridge during an investiture ceremony at Buckingham Palace, London

What makes someone a sir or dame in Britain?

ST. LOUIS — Recently, a listener of our Royal Dish podcast asked us to explain The Most Excellent Order of the British Empire, and we are happy to try to break it down.

These are orders that you might hear referred to as MBE or OBE. Some of the people honored with these awards are called Knights or Dames.

The Most Excellent Order of the British Empire, according to Wikipedia, is one of six orders of chivalry and four orders of merit. They’re awards given by the reigning monarch rewarding commoners for their contributions in various areas like arts and sciences or charitable work.

They were started by King George V in 1917, and there are five levels or classes. Here they are in order of importance:

The very top rank, the GBE, is very rare!

The CBE is the third highest of the order's five ranks, and only the top two can use title sir (for a man) or dame (for a woman).

People can still become a sir or a dame without first receiving a KBE or a GBE. Sir Elton John has a CBE but has also been made a Knight Bachelor, for example.

Only British people can be made a Knight Bachelor, but foreigners can be given an honorary KBE.

Most of the people who get these are British subjects, because other countries give out their own awards. But, honorary knighthoods are sometimes given to citizens of nations where the Queen is not head of state, and those people can’t use the title of sir or dame.

PEOPLE WHO REFUSED IT

David Bowie is among a few celebrities to have rejected honors, having turned down an OBE in 2000.

Others include celebrity cook Nigella Lawson and comedian John Cleese.

The Beatles were appointed as members in 1965. Then John Lennon returned his MBE in 1969 in protest against Britain's involvement in the Nigerian civil war.

The Order is somewhat controversial. And there’s a long list of reasons people don’t like the recognition or decline it. Some people think they’re outdated or reinforce social class distinctions. Others feel the system is biased and honors people are who aren’t deserving.

Then, there are people who’ve rejected an honor, only to accept a different one. Sir Paul McCartney and Sir Alfred Hitchcock are on that list.

You can learn more about The Most Excellent Order of the British Empire on this week's episode of Royal Dish. The episode is called 'KBE? CBE? GBE? What? We’ll explain.' Details on how to listen, subscribe and download are below. You can also click here.

Paul McCartney performs during the halftime show at the Super Bowl.
AP Images