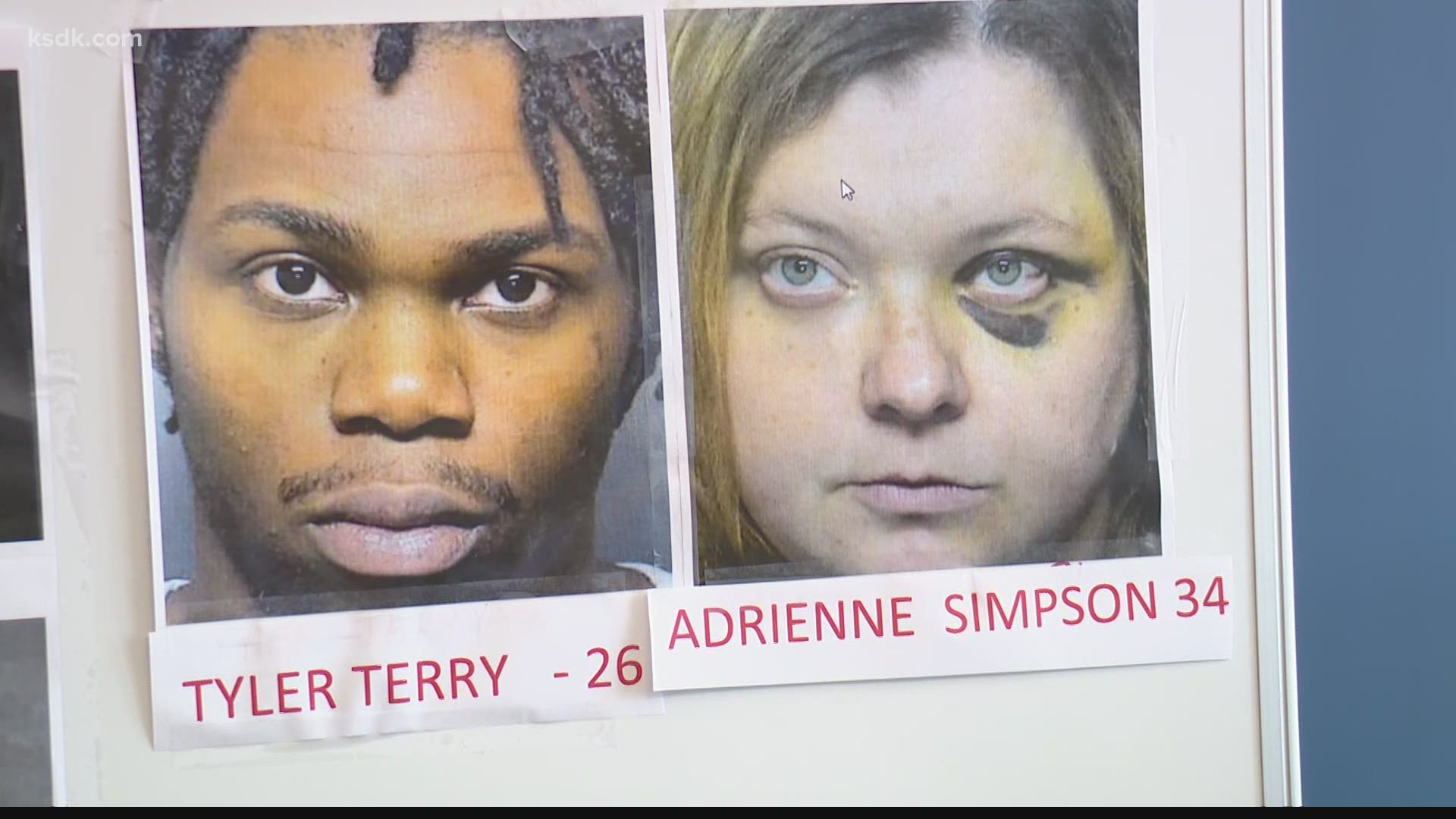 ST. LOUIS COUNTY, Mo. — Police believe a South Carolina couple on a crime spree is responsible for two weekend St. Louis County murders and have taken one of them into custody while a manhunt is underway for the second.

On Thursday, police said Tyler Terry and Adrienne Simpson were involved in two deadly weekend shootings in Brentwood and University City. Simpson was arrested in South Carolina, and Terry remains at large.

Investigators said Terry and Simpson are wanted in a series of violent crimes in South Carolina, including the murder of Simpson's husband and a high-speed chase that included firing shots at police.

There is no known connection between the victims in the St. Louis County murders, Dr. Sergei Zacharev and Barbara Goodkin, and their suspected killers, according to Brentwood Police Chief Joe Spiess.

"We're clear that robbery was the motive," Spiess said.

Several videos throughout St. Louis County helped police identify them as suspects wanted in the murders of Zacharev and Goodkin after separate shootings about an hour apart in Brentwood and University City Saturday night.

Police have video of the suspects stealing a license plate from a vehicle in north St. Louis County to use on a gray or silver Mitsubishi Mirage hatchback.

From there, they tracked the suspects to a drug deal Sunday in north St. Louis city. Those involved in the drug deal led investigators to a motel. Surveillance video from the motel gave investigators a first look at the faces of Terry and Simpson.

5 On Your Side received these exclusive surveillance photos used by the Major Case Squad.

Monday night, the car with the stolen license plates was spotted in South Carolina. Police there tried to pull over the vehicle; Terry and Simpson tried to get away, police said.

The police chase turned into a shootout with officers. Terry is accused of firing shots at Chester County Sheriff's Office deputies while riding as a passenger in a car fleeing law enforcement.

Simpson was arrested at the scene. Terry ran into a wooded area. The search for him is still underway, according to 5 On Your Side's sister station WCNC in South Carolina.

Police said it's unclear why Terry and Simpson were in St. Louis County. They have no known connections to the area.

"We have absolutely no idea and we may not know," said Chief Spiess. "It could be random how they ended up here in Brentwood and University City. We don’t know. We may know at the end of the investigation, but we’re not there yet."

Nonetheless, interstate investigators worked quickly to have some answers in this case.

"One of the most difficult homicides to solve is when the victims and suspects don't know each other," said Spiess. "And we have suspects who are not from this area."

View an interactive map of the crime scene locations below:

Spiess said there is no reason to believe Terry will be making his way back to the St. Louis area.

On May 2, Terry is accused of murdering Thomas Hardin in York, South Carolina, according to 5 On Your Side's sister station WCNC in South Carolina. Hardin identified as a woman and was acquaintances with Terry, a WCNC reporter shared.

Also on May 2, police believe Terry fired shots on a street and at a Taco Bell in Chester, South Carolina.

And that same day, Simpson's husband, Eugene, was reported missing by his mother. His body was found Wednesday in Great Falls, South Carolina. Terry is suspected in that murder as well, WCNC reports.

Police in South Carolina have obtained warrants for Terry for various charges including murder, attempted murder, possession of a weapon during a violent crime and burglary for the shooting death of Hardin and the shootout with police.

Police also got a warrant for Adrienne Simpson for accessory after the fact for Hardin's murder.

It's not clear whether Adrienne Simpson and Terry might be responsible for other crimes committed between Missouri and South Carolina.

Watch the full briefing from police Thursday morning in the YouTube video below:

The investigation in St. Louis County began after the first shooting happened in the 8200 block of Delmar — about two miles west of the Delmar Loop — at around 10:50 p.m. Saturday. When police arrived, the victims, a couple in their 70s, had already driven to a hospital.

At the time, they were driving a new high-end SUV.

The 74-year-old man was shot in the chest, but police say his cellphone blocked the shot. He was treated and released, but his wife, 71-year-old Barbara Goodkin, died Sunday.

About an hour after they were shot, at around 11:45 p.m., Brentwood police officers responded to reports of shots fired in the 8700 block of Eager Road in a parking area between the Drury Inn & Suites and Bonefish Grill. There, they found Dr. Sergei Zacharev shot to death.

Friends and colleagues of Zacharev started a GoFundMe to benefit his son. The medical group that the doctor worked for since 2013, Midwest Anesthesia Providers, started the effort with the hopes of raising $50,000.

Some of Zacharev's personal belongings had been taken from him and he had been shot multiple times, according to sources familiar with the investigation.

Those who want to remain anonymous or who are interested in the reward must call CrimeStoppers.