A program designed to help depressed and addicted doctors has been blamed for ruining lives, and even driving some physicians to suicide. 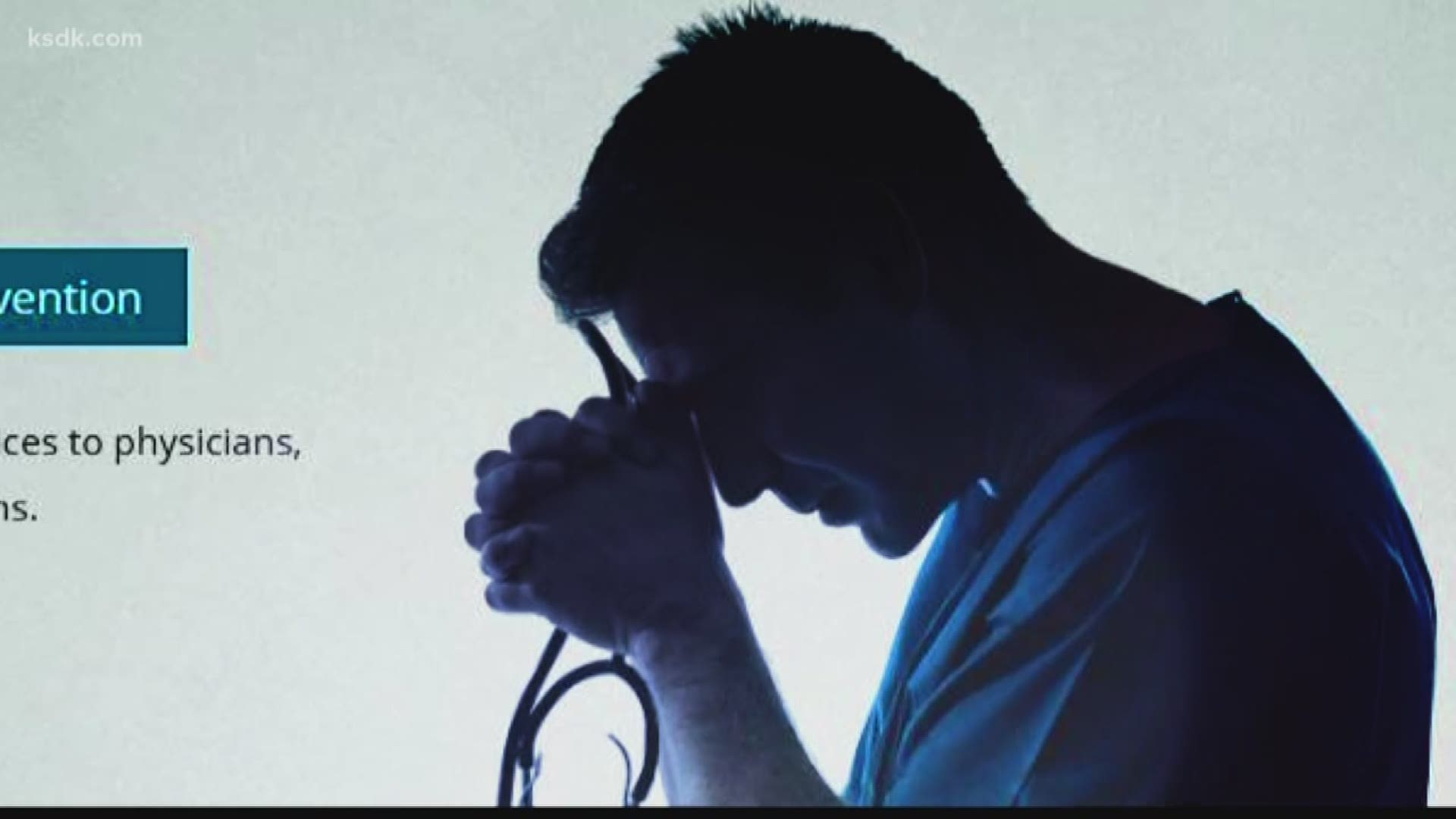 You may think doctors have it all: education, status, money.

But now they have something else: the highest suicide rate of any profession.

For months, the I-Team has been exposing a state health program that's supposed to help addicted or depressed doctors.

But what the I-Team found out about that program has many doctors questioning if it's doing more harm than good.

For thirty years, Bob was a small town Missouri doctor. He asked the I-Team not to use his full name to protect his family.

"All I ever did in my life was play hockey and practice medicine," said Bob.

Yet, while he was busy healing others, Bob admits he struggled to heal himself.

"My father I knew, I always knew had depression. I think I inherited some of that."

For decades, his fight was a private one. Bob managed pill by pill with anti-anxiety medication.

"It was a low dose Benzodiazepine. I never took more than the prescribed amount. I found that helped me more than anything."

One day, Bob's supervisors at the small hospital where he worked offered him a lifeline: confidential treatment for his problems.

"They wanted me to speak to the gentleman in charge of the physicians health program in Missouri."

The idea behind the Physician Health Program (PHP) is to help doctors with addiction or mental health issues get well and return to practice.

But here's the catch: once you seek help from the PHP, you are no longer in control. The PHP decides where you get treatment, no matter the cost or distance. The Missouri PHP contracts with "preferred centers" around the country. The I-Team found many of those centers are also significant donors to the PHP industry group.

Former PHP leaders and whistleblowers have expressed concern that the "preferred" centers have no special qualifications to handle the doctors that are often forced into their care.

Perhaps most concerning about the program is the overwhelming control the PHP has over the doctors in the program.

If you fail to follow the PHP's recommendations, the Missouri Board of Healing Arts can choose to suspend or even revoke your medical license.

But Bob had never heard of the PHP, and he said he certainly wasn't worried about it.

Bob was told to report a "PHP-preferred treatment center" in Lawrence, Kansas, to be evaluated. The center advertises its expertise in dealing with professional burnout.

But the problems began before he even arrived.

"At that point, they wouldn't let you take your medicine. So I started to withdraw from the Benzos."

Addiction experts say trying to kick a drug habit cold turkey can be dangerous. Bob said he experienced seizures, sweats, and said he felt like he was going to die.

"They didn't seem to have any idea what to do with me. Finally, I said, 'I need help or I'm going to die.'" said Bob.

He said the other doctors at the facility then drove him to get help.

From there, a nurse from the center escorted him on a plane to Atlanta, where he was put in yet another "PHP-preferred center".

Bob was no longer in control of his own life.

"I thought I had to do it. I was afraid I would lose my license," said Bob.

Bob said all that PHP-mandated treatment cost him his life savings, around $50,000 and a wasted five months.

He said the program did nothing to treat his biggest problem: depression.

"Being off the benzos exposed more of the depression. And that was OK. But they never changed the treatment. They did a lot of group therapy. They asked you, 'Hey Bob, how are you feeling?' And I just said 'Terrible. I feeI terrible. I don't feel well.' And they'd say 'OK, well thanks for sharing.'" said Bob.

Bob did everything the PHP demanded.

Released with a clean bill of health, he said he still wasn't allowed to practice medicine. In fact, Bob said the PHP required him to sign up for five years of monitoring.

"[The Executive Director] just said, 'Well, here's the agreement. You got to sign it and you'll be going to meetings, you have drug screens and on and on and on.' I had no idea about the cost," said Bob.

At roughly $1200 a month, Bob quickly learned he couldn't afford it.

"If I was working, it would've been chump change, but I slowly descended into a state of poverty. All my savings were used up paying for all these things. I lost my farm, home."

The very program that pledges to return physicians to "healthy, professional, functioning" didn't want to help Bob if he couldn't pay.

And because he couldn't afford the mandatory drug screenings and doctors visits, he was in violation of his PHP contract. So, Missouri's board of healing arts revoked his medical license.

"My life was ruined."

"The PHP is not a life preserver for a physician," said Mark, a former attorney with the Kansas medical board. He once worked side-by-side with the PHP.  Now he helps doctors who find themselves stuck in the program.

Mark agreed to speak with us without revealing his identity.

Mark said he even knows of doctors who have committed suicide after getting treatment from the PHP.

In February, the I-Team detailed the story of Dr. Greg Miday — a St. Louis doctor at Barnes Hospital who committed suicide in 2012. Miday's family said last call before committing suicide was to the PHP. Miday's mother said PHP staff refused to allow Miday to check into a rehab of his own choosing.

The I-Team traveled to Jefferson city to share Bob's ordeal with State Senator Jim Neely. Neely is one of only two doctors in the Missouri legislature.

"Now I think maybe it's gotten out of control. I guess I'd be curious about an audit of this particular area," said Dr. Neely.
I-Team: is that something that you would feel comfortable championing?
"I will, I will look at this. I need to talk to Dr. Direnna."

Neely's friend, Dr. Jim DiRenna, sits on the board of the PHP, and the state medical board. In early April, we caught up with him in Jefferson City.

First, he agreed to speak with us.

But then he stopped answering our calls.

And to our surprise, State Senator Neely had suddenly changed his mind about looking into the PHP, saying that he was "focusing on legislation" instead. This is Dr. Neely's last year in the legislature.

DiRenna and Neely are just the latest state leaders to avoid questions about the program.

A few months ago, after repeated requests for an interview, we tracked down Bob Bondurant, the executive director of the PHP, outside of his home.

I-Team: why are doctors so afraid of the PHP?
Bondurant: "Hey, call Pat Mills, he's my boss."
I-Team: we've spoken to Mr. Mills and he hasn't answered our questions.
Bondurant: "This is embarrassing! I'm calling the police."
I-Team: why don't you give doctors a choice about where they can get treatment?

Bondurant did not answer any of our questions, and neither has his boss, Pat Mills. Mills is the Executive Vice President-Elect of the Missouri State Medical Association, the non-profit that runs the PHP.

"All my savings were used up paying for all these things. Um, I lost my farm, home."

Forced to live in squalor in a small, borrowed and non-functioning RV with several pets.

"There really isn't any running water. I have to use a chemical toilet outside."

A career dedicated to caring for others is gone for good.

"I think if it weren't for my faith as a Christian, I think I would have committed suicide. It's just such a dehumanizing program," said Bob.

Bob said he eventually did find great treatment for his depression but he had to do it on his own after the PHP dropped him. Bob is currently looking for work at Walmart and other retail shops.

Since our first investigation into this program, several states have taken action to install more oversight over their PHPs.

Massachusetts is planning an audit of its program, and Louisiana and Colorado have been also been discussing changes in the legislature.
Efforts are also underway in Missouri to start a class-action lawsuit against the program and some of their "preferred" centers.

Any physicians seeking help should contact the Center For Physician Rights.

RELATED: They're required to fix up abandoned, blighted homes. So why isn't all the work getting done?