O'Reilly, Blues even series with Bruins after 4-2 win in Game 4

And who could have thought it would be Zach Sanford to bring out the best in O'Reilly? 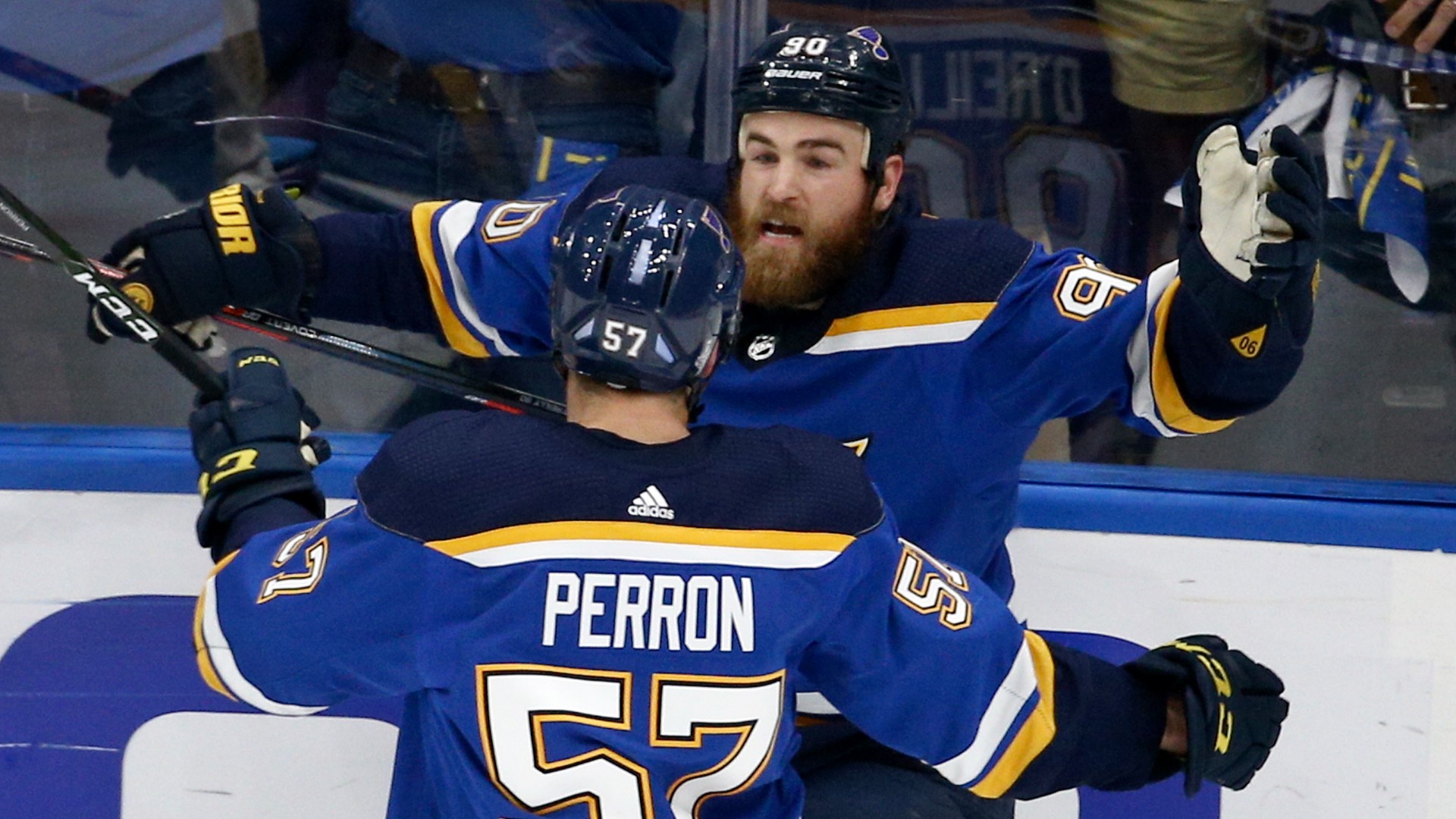 ST. LOUIS — Ryan O'Reilly, welcome to the Stanley Cup Final. The Blues needed his offense in the biggest way in a must-win spot.

And who could have thought it would be Zach Sanford to bring out the best in O'Reilly?

O'Reilly's line injected some life into the Blues' lineup. O'Reilly scored twice, including the game-winner midway through the third period to help the Blues to a 4-2 win against the Boston Bruins in Game 4 of the Stanley Cup Final on Monday at Enterprise Center, the first-ever home win in the Cup Final.

The best-of-7 series is now tied 2-2, with Game 5 set for Boston on Thursday.

O'Reilly had just three goals in 22 playoff games but became the second Blue in St. Louis playoff history and first since Red Berenson (Game 3, 1968 vs. Montreal) to score multiple goals in the Cup Final.

Sanford, who made his debut in the series in game 3, added his second assist in as many games, and coupled with David Perron, the line was effective and impactful in the offensive zone. And if Sanford was what needed to inject some goal-scoring into O'Reilly, the Blues will be happy.

"I don't know, but I'll take it," Sanford said with a grin. "He was awesome for us tonight at both ends. He has been all playoffs. For him to score a big goal like that, it's awesome to see."

A win was of utmost importance for the Blues, who could have been faced with elimination heading back to Boston for Game 5, but they have now made it a best-of-3 series, which is what they wanted.

"We're happy we tied it up," said Blues goalie Jordan Binnington, who made 21 saves and improved to 7-2 in the playoffs following a loss, one off an NHL record. "It's just two games, and like you said, it's a best-of-3 so we start preparing for the next game."

The Blues, as Boston did in Game 3, adjusted and figured some things out. It seems to be a common thread in this series. Their forecheck was what interim coach Craig Berube called "relentless" and smothering. It was effective and enabled the Blues to have sustained zone time shift after shift. None was more evident than when a shift that began in the Boston zone with 9:09 left in the second, and when a penalty was called on Boston defenseman Connor Clifton with 6:07 remaining, the Bruins were only able to exit the zone four times for all of 25 seconds.

"We were relentless, I thought, tonight," Berube said. "We didn't stop for 60 minutes. That's how I look at the game. Guys were hounding pucks and hounding pucks and working and reloading and doing all the little things right. Line changes were great, getting fresh people out there. It was a good game all around.

"Puck placement (was effective). We did a good job of putting pucks in. We had speed already going onto the puck, which was important, and getting there and making contact and having our second man in there quick. What we did better tonight, we stayed out of the penalty box, there wasn't a lot of penalties. We had a lot of 5-on-5 play and we had a lot of o-zone time because of it. We did a good job of managing it in the offensive zone not throwing it away, working it, keeping it, having some patience with it, taking a good shot when we have one, not getting it blocked and keep working it. I thought we did a good job of that tonight."

The Blues got good jump early, and scored another goal in the game's first minute when O'Reilly's wraparound gave them a 1-0 lead 43 seconds in.

The Blues had good D-to-D movement with Pietrangelo, who had two assists and was a plus-3 in 29:37, and Vince Dunn, who made an immediate impact upon returning to the lineup after missing six games getting hit in the mouth with a shot in Game 3 of the Western Conference Final. Dunn's wrister towards the net gets tipped by Sanford, O'Reilly collects the rebound and beats Bruins goalie Tuukka Rask to the near post to make it 1-0.

The Blues played more in Boston's end but Charlie Coyle scored his third goal in as many games to tie the game 1-1 at 13:14. Coyle was able to get a slight redirection of Zdeno Chara's sharp-angle shot, Binnington couldn't contain the rebound, and Coyle was on the doorstep. Chara left in the second period, by the way, after a Brayden Schenn wrister from the right circle caroms off his stick and hit him in the mouth. Chara was bleeding badly and went in for repairs but did not return to the ice for the remainder of the game but was on the bench in the third period wearing a full-face cage. He played just 8:23.

"We clearly know he got a puck to the face, very uncomfortable, was advised not to return to play, had some stitches, probably some dental work in the near future," Bruins coach Bruce Cassidy said. "He wanted to come out on the bench and be with his teammates, that’s why he was out there. I don’t know his status for Game 5. Obviously when he gets back home, he’ll have to be re-evaluated, see how he feels tomorrow for starters. If we have something for you we’ll give it to you. So I can’t say whether he’ll play in Game 5 or not. No idea."

The Blues regained the lead when Vladimir Tarasenko put them ahead 2-1 at 15:30 when the Blues' top line worked into the zone, and as Brayden Schenn was passing through the slot, Jaden Schwartz did enough to get to Connor Clifton's stick, and the puck for the Pietrangelo. His shot off Rask's right pad found its way to the slot, and Tarasenko finished high blocker side.

"I think we shoot the puck way more this game," said Tarasenko, noting the Blues' 38-23 shot advantage, including 64-41 shot attempts in favor of the Blues. "It's playoffs, a little bit different game than the regular season. You don't really have like clear shots. People try to block shots. You try your chances and score some greasy goals. You see on our goals."

The Blues, for the most part, dominated the second period but came of it tied 2-2 when they allowed a deflating shorthanded goal to Brandon Carlo at 14:19.

The Blues had literally dominated zone time for a good three minutes without scoring, had a number of Boston skaters in zone dead tired, Tarasenko drew a penalty, and the Blues' woeful power-play struck again.

Dunn and O'Reilly didn't pressure Brad Marchand, who found Patrice Bergeron for a shot, and Binnington gave up a big rebound for Carlo to put it home on the far side.

"Even though they tied it up there with the shorthanded goal, we responded and we regrouped in the second intermission and had a big third period," Binnington said.

RELATED: Which St. Louis celebrity is the biggest Blues fan?

O'Reilly put the Blues ahead for good when he drive the net and banged home a rebound of Pietrangelo's shot from the right boards. Rask made the initial save but left a juicy rebound and O'Reilly made it 3-2 with 9:22 left.

"We were catching them on a change and we had a quick-up mindset that we kind of talked about as a team having," O'Reilly said. "For that, it was just go to the net with some speed and it was a good shot and good bounce.

"... The way it was developing, we were going to have something to the net once you see Petro coming down there. I'm just trying to do what I can to get to that backside. It was a great bounce that happens sometimes, and you just try to throw it at the net. Sometimes you get those bounces and I was lucky to be on the end of it."

Pietrangelo added: "They dove in for a change. It's tough to beat a goalie from that angle. When you get traffic going to the net like that, you try and shoot it hard and make him make a good save and hope to get a rebound. It's a great job by him going to the net because if he doesn't do that, it's probably an easy rebound for him."

The Blues, who outshot the Bruins 13-4 in the third period, never gave Boston a chance at sustained zone time. Pucks were being sealed off in the neutral zone, then right back into the Boston zone, and Schenn's empty-net goal with 1:29 sealed it when he picked Clifton's pocket in the neutral zone.

The Blues' forechecking style was led by Oskar Sundqvist, Alexander Steen and Ivan Barbashev, the so-called fourth line that had the assignment of shutting down Boston's top line of Brad Marchand, Patrice Bergeron and David Pastrnak.

Sundqvist, who came back after being suspended for Game 3, played 19:32, Steen played 17:38 and Barbashev played 17:27 to help alleviate some of the pressure of the Blues' top players so they're fresher later in games.

"I'll tell you what, Sundqvist's line was unreal tonight," Berube said. "They did a great job against Bergeron all night. They were out there almost every shift against Bergeron's line. I thought they did a helluva job.

"... It was a real team game. I thought everyone contributed and everyone was on the same page."

RELATED: Chance encounter at a Blues game leads to a happily ever after marriage

"He played a great game, start to finish," O'Reilly said of Sanford. "He was making plays at key times. We found a way to just tighten the forecheck. We pressured them well. I think just as a group, being disciplined really helped us kind of find a rhythm, which allows us to roll the lines a bit. We use that momentum with each other to keep building off it. As the game was going on, we were wearing them down and just kind of rolling shift after shift."

When the Blues used Sanford, O'Reilly and Perron earlier this season for six games, they produced 23 points (seven goals, 16 assists).

"They've been together a couple times," Berube said. "They produced when we had them together. Sanford's strong on the puck and he's got good puck skills down low in the offensive zone. I really liked his game in Game 3. I thought if maybe I put those guys together, it might spark a little bit and get something going. It was fortunate enough that they did. That was my thought process on it."

RELATED: 'Laura would have loved it' | Former business manager reflects on a "Glori(ous)" new Blues Tradition