At her public event, this royal even tried on a woman's shoes!

ST. LOUIS — Excitement had built for weeks in the St. Louis area, back in the winter of 2003-2004. Royalty was coming to town, and it was one of the hottest tickets around.

This was no concert. It was Sarah Ferguson, Duchess of York, on her national, 10-city tour promoting her debut as a spokesperson for Weight Watchers.

The first week, she hit Boston, New York, Chicago and Los Angeles, doing local TV and radio and making appearances on Good Morning America and a big interview for Lifetime TV. She also did a sit-down with Entertainment Tonight.

Again, she did local media interviews and some meet-and-greet speeches with ballrooms full of fans who bought tickets to see her.

That's what happened here in St. Louis. Hundreds of people turned out to see and hear her in person at a Weight Watchers Super Meeting, held in a ballroom at the Hilton St. Louis Frontenac.

Credit: KSDK
A crowd cheers Sarah, Duchess of York, as she gets ready to speak at a Weight Watchers Super Meeting at the Hilton St. Louis Frontenac on January 14, 2004.

Ferguson was greeted by a huge ballroom full of cheering women excited to get close enough to touch her.

Click on the video player below to watch a story we aired on January 14, 2004, the day the Duchess of York visited St. Louis.

By the time she was speaking, she had already done six interviews with local media. It was a punishing schedule.

I was able to talk with her one-on-one her right after the Super Meeting, in a hotel room at the Frontenac Hilton. I was star-struck.

Fergie, as she's also known, was in a black pantsuit and crisp white button-up shirt. She wore her hair long and looked beautiful and glamorous, just as you would expect a princess to look.

She had been divorced from Prince Andrew for eight years and was clearly re-inventing herself and trying to support herself as well.

I remember her being so very friendly when I met her. I don’t specifically remember if I’d been given instructions about how to treat her, or what I could and couldn’t ask. But she was a great interview. Excellent soundbites about her battle with her weight, her issues with food and how that developed, and she even talked about her dear friend, Princess Diana, who had died in 1997.

Several women from the audience had been chosen to meet her one-on-one. I remember while we all stood around chatting that Sarah decided she liked one woman's shoes so much, she had to try them on!

Credit: KSDK
Sarah, Duchess of York, tries on a woman's shoes backstage at her Weight Watchers Super Meeting at the Hilton St. Louis Frontenac. Sarah had been admiring the shoes before the woman offered to let her put them on.

It was an exciting moment as a reporter and an amazing look at the PR machine that made her tour possible. It was definitely a day to remember.

She's probably best known as the former wife of Prince Andrew, Duke of York, who is the second son of Queen Elizabeth II and Prince Philip, Duke of Edinburgh. She has two daughters, Princesses Beatrice and Eugenie, who are ninth and 10th in the line of succession to the British throne.

During her St. Louis visit, Fergie described one of the hardest times in her life. It was 1974, when her parents divorced. Her mother married a polo player and moved to Argentina, and that's when Fergie said she turned to food for comfort. It was a habit that would haunt her for decades.

Sarah Ferguson reveals she was addicted to this before her four stone weight loss
SARAH FERGUSON, 58, the Duchess of York, is the mother of Princess Beatrice, 29, and Princess Eugenie, 27. The former wife of Prince Andrew, the Queen's second son, has lost a large amount of weight in recent years. How did she do it? What diet did she follow?

In more recent years, Sarah's been known for her extremely amicable relationship with her ex-husband. In fact, she and Prince Andrew still live and travel together.

The couple's daughter Beatrice has been quoted as calling them the "best divorced couple in the world." 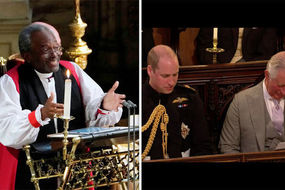 Sarah Ferguson and Prince Andrew 'the BEST divorced couple' in the WORLD
The Duchess of York lives at the Royal Lodge in Windsor, sharing a home with her former husband Prince Andrew. Sarah and Andrew are two peas in a pod, and their amiability has broken divorce stereotypes, particularly within the Royal Family. The pair are known to have a strong friendship, even though they divorced 12 years ago.