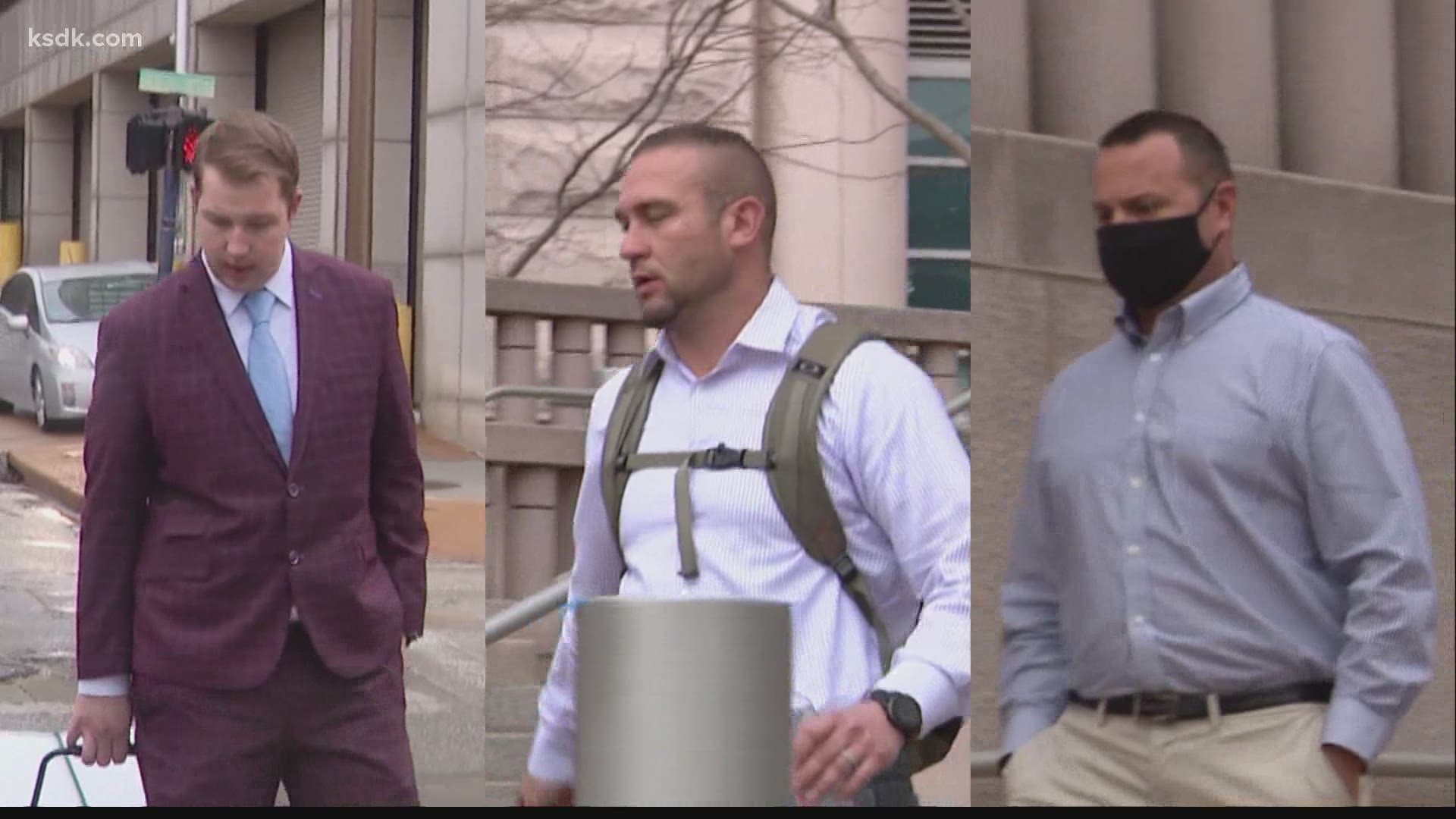 ST. LOUIS — The jury deciding the fate of three officers accused of beating a colleague working undercover as a protester in 2017 has begun its deliberations.

Former St. Louis officers Dustin Boone, Christopher Myers and current officer Steven Korte have all been charged with depriving officer Luther Hall of his civil rights under the color of law, which carries a maximum sentence of 10 years.

They’ve also all been charged with aiding and abetting in the commission of a crime.

The second and third counts all of the men are facing each carry maximum penalties of 20 years in prison. All four counts carry a maximum fine of $250,000.

The trial began with jury selection March 15, which was a great source of tension between prosecutors, the judge and defense attorneys.

The three defendants are white. Hall is Black. Defense attorneys used their strikes to seat an all-white jury -- a move prosecutors balked at saying this case has a racial component to it.

Since then, one Black woman, who was among the pool of alternates, has been added to the jury after one of the original jurors had a personal emergency and was dismissed Tuesday.

Attorney Scott Rosenblum finished his closing argument Thursday and said his client didn’t think there was anything wrong with how Hall was arrested, so he had no way of knowing there would be an investigation for which he should destroy the phone. He also claimed Myers put Hall’s phone inside Hall’s backpack, when he could have thrown it in the sewer or kept it so no one could ever find it if he was really trying to destroy evidence.

Korte’s attorney, John Rogers, also finished his closing argument Thursday, saying his client was indicted about a year after the first four officers were accused and called the prosecution’s evidence against him “junk.”

Boone’s attorney Patrick Kilgore finished his closing arguments Friday and spent much of his time explaining the context around damaging text messages his client sent to his father and Hall following the assault.

In one, Boone tried to apologize to Hall.

“When you see the apology text Boone sent to Hall, that's not out of fear of being indicted or legal trouble, that is sincere,” Kilgore said. “And I understand Hall said he didn't respond because he said he didn't feel it was sincere, but that doesn't mean it wasn't sent without sincerity.”

Boone also texted his father, who is a retired officer, who said he had heard his son put a good “(expletive) whooping” on Hall.

“Yeah, it’s not one I’m proud of,” Boone responded.

Kilgore said the text was taken out of context.

“As the son of a police officer, it's cop talk, it's bravado, it's juvenile, it's immature, but it's cop talk and it's a coping mechanism,” Kilgore said. “You would be aghast if you would read texts between doctors, surgeons and just pick them out at any point in time.

“Do not accept this, do not take what government is offering you, which is, ‘Here are texts expressing his disdain for protesters,’ and say, ‘OK, he must have assaulted Hall because he was there. You can't do that, that's not what the law allows.”

Kilgore also said the photos and video evidence presented at trial show his client wasn’t near Hall during the assault.

He continued: “He's not on trial for sending text messages. He is here because the government has alleged he violated Hall's civil rights.”

First Assistant U.S. Attorney Carrie Costantin got about 45 minutes for her rebuttal, in which she, too, seized on the text messages Boone along with Myers sent to various people before and after the event.

She continued: “Text messages are how you get in someone's head. Other officers were thinking, why do I have to be here? But Myers is having a good time. He says ‘For some sick reason I live for this.’

“He's pumped up about this. He's excited about beating up protesters.”

She read another text Myers sent to a friend, which read: "I have been wanting to apologize to him because I feel bad. We obviously didn't know he was a cop."

The jury began its deliberations at about 10:30 a.m. Friday. At about 3:30 p.m. the jurors asked the judge if they could return Monday for deliberations, which the judge told them they could.

She also excused one of the alternate jurors because he said he had a doctor's appointment he didn't want to miss.