Now that the NHL grind has caught up to him, can Jordan Binnington rebound?

Binnington has started 95 games in the past 13+ months. Is that catching up to him? Has the NHL caught up to him? Can he rebound? 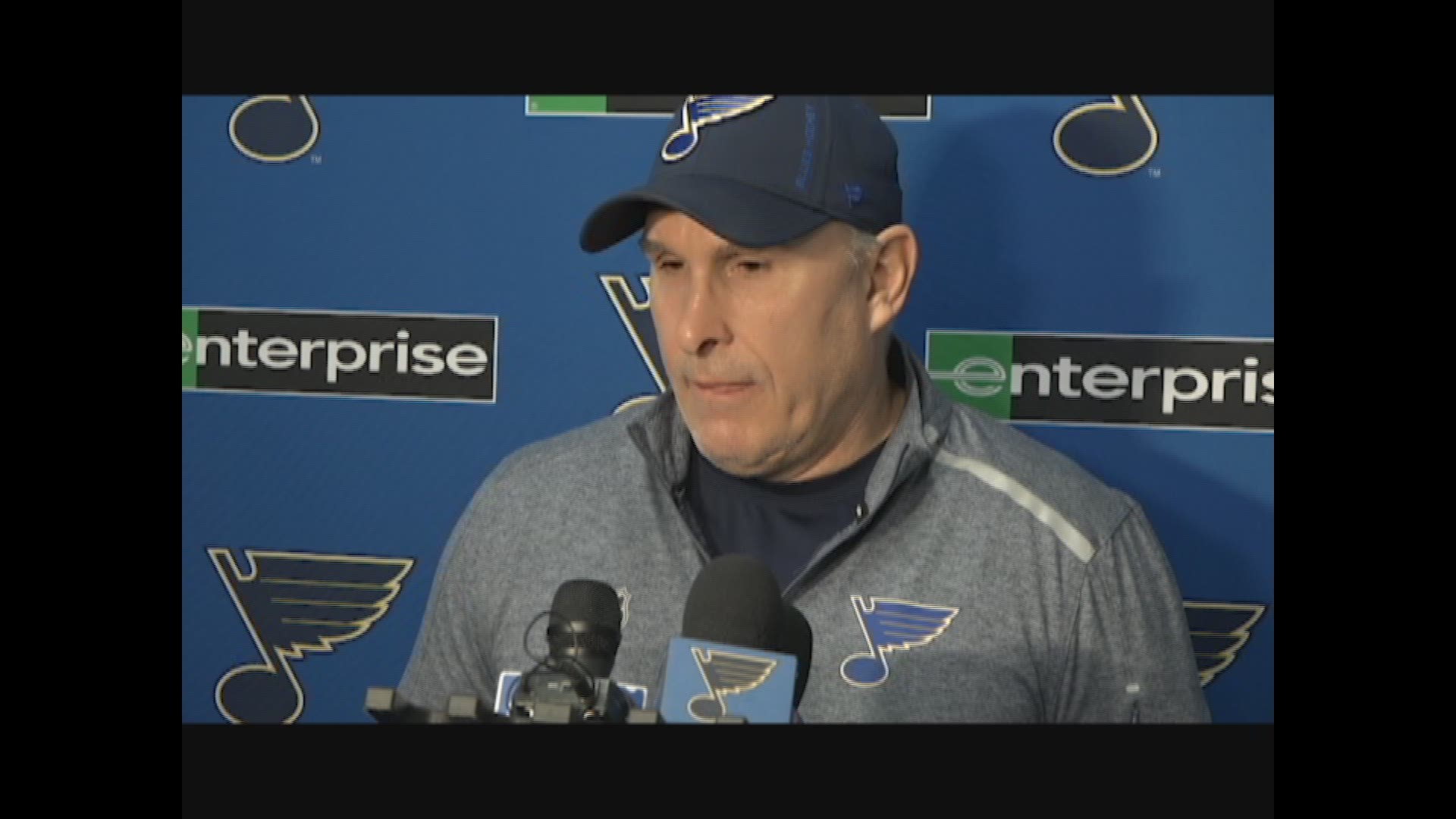 ST. LOUIS — Expectations can be a double-edged sword in the world of sports. They can create a picture for fans that doesn’t involve fault, or give them the weary idea of a return to grace.

If there was a driving force behind the St. Louis Blues Stanley Cup run last year, it was Jordan Binnington.

The minor league journeyman who once recorded wins for the Boston Bruins' minor league team became an over-the-spring sensation in St. Louis, earning the status of legend. That legendary status can be persistent and pesky at the same time, leaving fans to wonder what the sequel will look like.

Through the first three months of the season, Binnington proved he was no partial season fluke, posting a very solid goals against average (GAA) and save percentage, but nothing spectacular. On Dec. 29, he dominated the Winnipeg Jets two nights after being dominated by them, saving 26 shots and picking up the win. On Thursday night at the Enterprise Center against the Jets, Binnington didn't have a bad night at the office, stopping 21 of 24 in route to a 4-2 loss, but it was far from good. Viewed as a single start, one wouldn't feel the need to stress over it.

But it was the latest difficult start in a series of rough outings for Binnington. It was the eighth start in his past 13 games where he had allowed three goals or more. Binnington hasn't posted a save percentage of greater than 91% since a start against Buffalo on Jan. 9. Teams have put four or more goals past him in five of his last 12 starts. The GAA and save % has taken a hit in recent weeks. While Binnington is making saves to help his team stay in or win the game, he's being beat more often these days than he ever was last year. 2020 hasn't been nearly as kind to the #1 guy in net.

A goaltender being the no doubt number one in net for an entire season is something that has been fleeting and hard to pinpoint or locate seemed to find its footing with Binnington. The thing that plagued his backup, Jake Allen, for many seasons wasn't an issue... until now. A full season isn't as easy to perfect as some have made it out to be. Seasoned vets like Ben Bishop, who rides into town this weekend with the Dallas Stars, have done it for two teams.

Bishop started 60 or more games in three straight seasons for the Tampa Bay Lightning, even getting to the Stanley Cup Final. With Dallas the past two-plus seasons, he's been the number one in net and collected 14 shutouts with the Stars during that time.

It was last spring that Bishop opposed Binnington in the Western Conference semifinal, falling short in that Game 7 double overtime thriller. Bishop stopped over 50 shots, but couldn't find a way to stop Pat Maroon's rebound off a Robert Thomas shot. Bishop arrives on Saturday leading the NHL in save percentage and GAA. He will take the net opposite Binnington once again, and all I can think is, "will Binnington be that guy for the Blues?"

I still believe so. I wrote about it recently for St. Louis Game Time right after Binnington dazzled at the All Star Game. He seems to have the mental makeup to bounce back in this league and his positioning in net and ability to make the big save are well known and preserved skills that haven't completely diminished. After all, Binnington ranks third in GAA for goalies with at least 35 games played. It's not like all hope is lost here, but doubt has started to creep in.

What about the defense flopping in recent games? It's warranted, especially for a Blues team built on their defensive front. But you can't place the blame for all those goals, a total of 33 in his last 10 games, on the defenders. In no right hockey mind can someone tell me it's just the defense. If Binnington is going to be this stalwart in net who remains consistent over the next 3-5 years, he has to steal a game or two eventually. He produced a great half season in 2019-20, and was solid for the first three months of this season. But you'd only have November to look at this season for a truly memorable stretch of games.

Is he fried? It's very possible. He started 30 games last year, from late December to the end. Throw in 26 playoff games and 39 starts this year, and it's quite possible he's hit a brick wall. That's 95 starts in a little over 13 months. Perhaps a breather for 2-3 games would set Binnington up for another thrilling finish. Maybe not. That's hockey. The only guarantee in this game is a pile of stinky laundry at the end of the game.

When I presented this take on Twitter after last night's loss, there was a lot of blowback. How could you attack Binner's play? He's not the issue, man, just look at the defense. The first two weren't his fault, and the other one was a fluke-type score. A lot of denial and fierce defending happened, which was predictable. A guy helps a team win their first Stanley Cup, and he earns a delay in judgement.

But June 12 is long gone. The Blues have a window to repeat as Cup champs, and the clock is ticking.

RELATED: Blues and Jets set for last match up of the season

They can score goals and have an elite power play, but their defense is sloppy and their goaltending is beatable. The Colorado Avalanche aren't exactly closing in on the Blues in the Central Division, but they are within shouting distance with 66 points to St. Louis' 72. If Dallas wins on Saturday, they will be just five points behind. It's becoming closer.

All of that isn't on Binnington, of course. But he needs to be better. He would tell you that the legend of last year matters little to the reality of today, and that he can make more stops. The puck isn't bouncing right for him, but that'll happen during the rough patches.

The NHL has seemingly adjusted to Binnington, so the question now is simple: can he adjust back and seize the day again? As good as Allen has been in a backup role, we all know what happens when he starts too many games in a row. The goaltending strength of the Blues rests on Binnington's shoulders alone.

Expectations contain an equal amount of sweet and bitter. You feel the exhilaration of last year, which preempted the expectation-but you also keep in the back of your mind that what you saw wasn't 100% real and sustainable.

Is Binnington sustainable in net? We are about to find out.