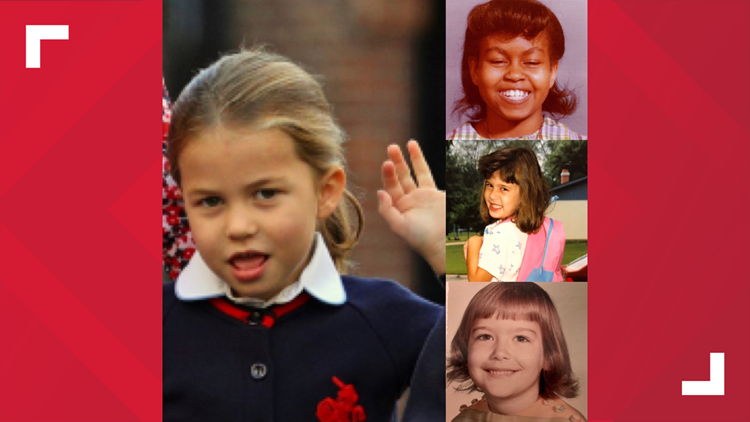 ST. LOUIS — Nervous. Excited. Scared. Those are just some of the emotions you probably even forgot you felt on your first day of school.

But the photos live on forever. And the future King and Queen of England will have some good ones to show off for the rest of their lives.

Princess Charlotte, daughter of Prince William and his wife Kate, recently showed up for her first day of school at Thomas’s Battersea. Her brother Prince George has been a student at the school in South London for a few years now.

He looked a little bored.

But Princess Charlotte was adorable in her school uniform, playing nervously with her ponytail and shyly reaching out to shake the hand of the headmaster.

The moment flashed across the globe thanks to social media. And there’s also video to go along with it that will follow the fourth in line to the British throne all of the days of her life.

It’s one of those milestone moments that we can all, royal or not, identify with.

Former first lady Michelle Obama also thrilled the internet with a photo of her first day of school.

She posted the picture to Instagram along with a sobering message about all of the girls around the world who don’t have the opportunity to go to school. Ninety-eight million of them, to be exact.

"It’s after Labor Day, so I’m thinking about all the young people heading back to school and reflecting on my own days as a student in Chicago. I learned a lot in school—how to do my multiplication tables and structure a paragraph, yes, but also how to push myself, be a good friend, and dust myself off after a failure. It’s so easy for us to take our education for granted, especially here in the United States. Right now, more than 98 million adolescent girls around the world are not in school. I believe every girl on the planet deserves the same kind of opportunities that I’ve had—a chance to fulfill her potential and pursue her dreams. We know that when we give girls a chance to learn, they’ll seize it. And when they do, our whole world benefits. Girls who go to school have healthier children, higher salaries, lower poverty rates, and they can even help boost their entire nation’s economy. So today on #WorldCharityDay, I want you to share your favorite #BackToSchool photo and to join the @girlsopportunityalliance to take action for global girls’ education. Visit the link in my bio to learn more—because the future of our world is only as bright as our girls."

This got us thinking. What do you remember about your first day of school? Do you still have the photograph tucked away somewhere? My Royal Dish podcast co-host Brandie Piper found hers. A sassy pose in a cute, animal print dress with matching backpack on the first day of kindergarten.

Brandie said what she remembers most about that school year was breaking her arm when she went sledding and hit a privacy fence, but acing the shoe-tying test despite her arm being in a neon pink cast.

Then there's me. A kindergartner at Central Union Preschool, in Honolulu, Hawaii.

One of the school rules? Students weren’t allowed to wear shoes because of all of the great playground equipment! That winter, the temperature one morning was just 58 degrees on the island, so my mom decided to keep me home because it was too cold! So many great memories.

We would love to see your first-day photos and memories. Post them on Twitter using the hashtag #RDFirstDay.

Do you find yourself keeping up with all things Windsor, Wales, Cambridge and Sussex? We may live across the pond, but if you’re like us, our fascination with everything and anything royal translates right here in the USA.
Now, we’re taking it to another level in our new podcast, Royal Dish. Hosted by 5 On Your Side’s Kay Quinn and Brandie Piper, it’s an American look at the British monarchy.
You can listen to the latest episodes in the player above or by clicking here.