5 On Your Side Countdown: The biggest 'what if' questions in St. Louis sports history

What if Stan Kroenke didn't own the Rams? What if the Spirits moved to the NBA? We look back on history-altering moments in St. Louis sports history. Here's our list 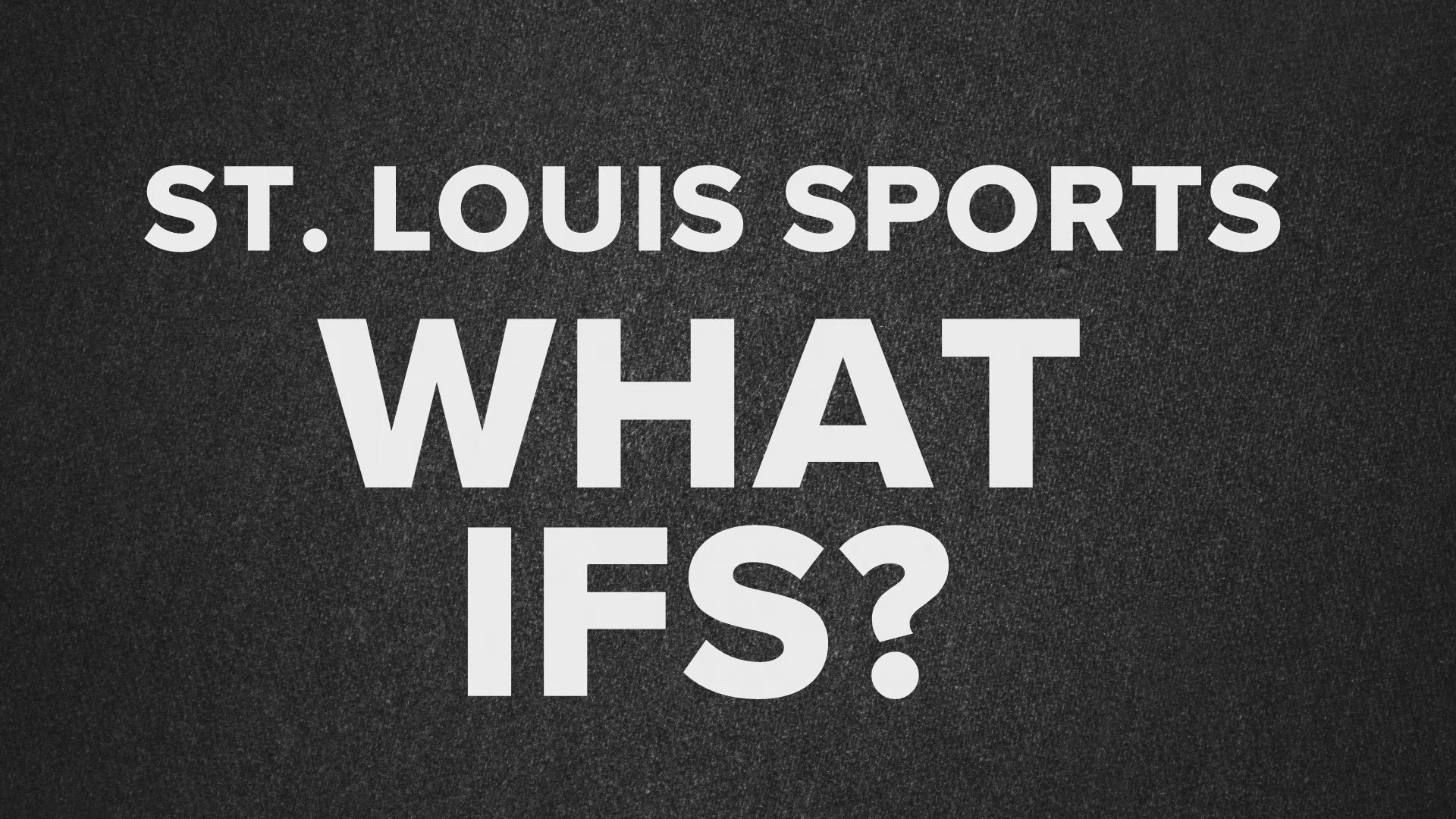 Now, sports director Frank Cusumano is rolling out his list of the biggest "what if" questions in St. Louis sports history.

If some of these things had happened, who knows just how different history might be.

What if Rick Ankiel had become the pitching star he was supposed to be?

What if the young Cardinals' lefty hadn't have succumbed to the control issues that ended his pitching career?

In 2000 as the second youngest player in baseball at 20, he won 11 games, was in the top 10 in ERA and strikeouts. Only hall of famer Randy Johnson struck out more per inning.

Fortunately for the Cardinals and Ankiel, his resilience as a hitter gave him a second life in the Majors.

But what if he had become that dominant lefthander he was projecting to be?

What if the tarp never ran over Vince Coleman?

It doesn't get more ironic than what happened to the fastest man in baseball in 1985.

The rookie had an outrageous 110 stolen bases in 1985, and was primed to help the Cardinals to the World Series.

Before Game 4 in the NLCS against the Dodgers, Coleman was run over by the slow-moving, 1,200 pound tarp. It cracked his left tibia and ended his post season.

What if he hadn't been hurt? St. Louis might not even know the name, "Don Denkinger".

Credit: AP
St. Louis Cardinals Vince Coleman, center, lies on the field of Busch Stadium in St. Louis, Mo., after his leg was run over by the machine that rolls out the tarp to protect the field from rain, Oct. 13, 1985. Teammates surround him. Extent of the injury is not known. (AP Photo/Ron Heflin)

Watch: The biggest "what ifs" in St. Louis sports history

What if the Blues had locked in Scotty Bowman as their head coach?

He won nine Stanley Cups as a head coach and 17 overall.

Bowman came to St. Louis as a 34-year-old and took the Blues to the Finals in three straight years. Yet, the ownership fought him and Bowman left.

What if the Blues hadn't have run him off? Last year's parade might not have been the first.

What if Grant Fuhr hadn't gotten hurt in the 1996 playoffs?

Fuhr was a hall of famer and won five Stanley Cups, but it could have been six in 1996 with the Blues.

If Nick Kypreos hadn't destroyed Fuhr's knee in the first round that season, the Blues might have had the team to go all the way.

That year, Fuhr played 79 games, and 76 consecutively. Both were NHL records.

With a loaded team headlined by Gretzky and Hull, it's hard to think about what may have happened if Fuhr hadn'y been hurt.

Credit: AP
St. Louis Blues goalie Grant Fuhr blocks a shot on goal in this Oct. 23, 1997 photo. The Blues announced on Friday, Nov. 7, 1997, that Fuhr's status would be day-to-day with a sour arm. Fuhr injured his right arm during the Blues' 2-to-1 loss to the Blackhawks Thursday night in Chicago. (AP Photo/James A. Finley)

What if Shad Khan had ended up buying the Rams?

In 2010, Khan, who now owns the Jaguars, was on his way to owning the Rams. But in the 11th hour, Stan Kroenke exercised his contractual right of first refusal to purchase the remaining 60 percent of the Rams.

So instead of getting a decent guy who hired former Cardinals president and Vianney grad Mark Lamping to run the franchise, we won the lottery in hell and got Kroenke.

What if Sam Bradford had become a star?

So many other first overall quarterback picks have worked out over the years. Why couldn't Bradford?

Because of injuries, Bradford played in a total of seven games in his second and third years in the league.

Bradford is one of just four first overall pick quarterbacks who never made the playoffs. He got paid though, to the tune of $129 million in his career, and the Rams got cheated.

What if Bradford had been Peyton Manning? Would St. Louis have a franchsie today?

CLEVELAND, OH - AUGUST 23: Sam Bradford #8 of the St. Louis Rams is looked at by trainers after being injured in the first quarter of the preseason game against the Cleveland Browns at FirstEnergy Stadium on August 23, 2014 in Cleveland, Ohio.

What if Craig Upchurch had been able to play at SLU?

The name has become legendary for Billiken fans.

He committed to play for coach Rich Grawer and SLU, and would have joined Anthony Bonner, Roland Gray and Monroe Douglas in what could have arguably been the most talented group of St. Louis kids ever for the Billikens.

He was a qualifier, but the school wouldn't let him in.

Instead, Upchurch scored 1,800 points at the University of Houston and the Billikens had to settle for the NIT year after year.

What if Tony Van Zandt hadn't been hurt and had become a star at Mizzou?

Van Zandt was the national high school player of the year out of Hazelwood Central, and was on his way to stardrom. Then he tore up his knee in a Lions Club all-star game 34 years ago in Jefferson City.

Van Zandt was ranked higher than Barry Sanders at the time. He was headed for an all-american career at Mizzou.

But after the injury, he was never the same. They don't play all-star football games in July any more.

What if St. Louis had built Bidwill and Big Red their stadium?

What if local politicians would have built Bill Bidwill his stadium in Earth City like he asked for?

Bidwill wasn't a great owner, but he wasn't heartless, and he raised his family here. He just wanted a stadium built for the football Cardinals, like the Colts and Chiefs got.

If they would've just listened to him all those years ago, St. Louis would have been spared from the wrath of Stan Kroenke.

What if the Spirits had been picked for the ABA/NBA merger?

The NBA took four teams from the ABA in 1976: The Nets, Nuggets, Pacers and Spurs. But not our Spirits. We almost had another shot at the NBA.

The owners, the Silna brothers, did work out the greatest deal in sports history in the process, by taking two percent of the TV contract from the NBA in perpetuity and made about $800 million.

But what if the NBA had picked us?

Credit: AP
** ADV FOR WEEKEND MAY 27-28 ** Ozzie Silna, poses for a photo Tuesday, May 23, 2006, at his home in Malibu, Calif. Over the past 25 years, Ozzie and Dan Silna have collected approximately $100 million from the NBA, despite the fact that their former team -- the Spirits of St. Louis -- never played a single game in the league. (AP Photo/Damian Dovarganes)

RELATED: 5 On Your Side Countdown: The 10 most intimidating athletes in St. Louis sports history

RELATED: 5 On Your Side Countdown | The 10 most influential trades in St. Louis sports history