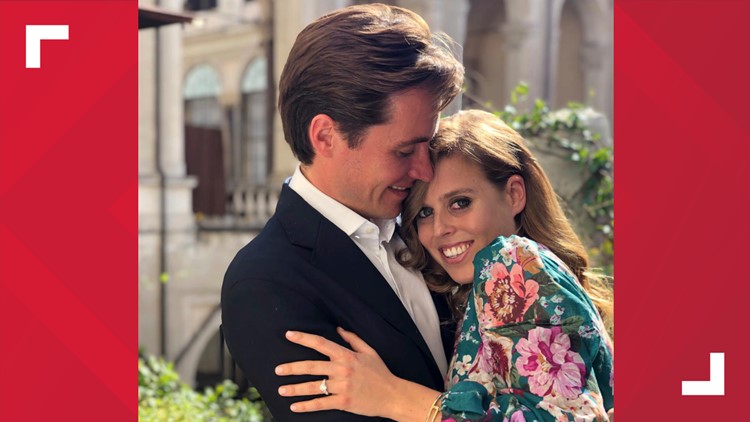 Photos: A look at the most famous royal engagement rings

ST. LOUIS — They’ve been used to seal a promise for centuries. Historians trace them back to the Roman Empire, although there’s some evidence they were used by the ancient Egyptians. The first one to feature a diamond was said to be presented to Mary of Burgundy by Archduke Maximilian of Austria in 1477.

Over the centuries, they’ve evolved to symbolize more than a couple’s intention to marry. They can also be an expression of personal style or cultural tastes. It’s clear the custom is in no danger of fading.

Princess Beatrice is the eldest daughter of Prince Andrew, Duke of York, and Sarah, Duchess of York. Mozzi is a British property developer. The couple announced their engagement in September 2019, with photos taken by the bride-to-be’s younger sister, Princess Eugenie.

According to Town & Country Magazine, the ring was designed by Shaun Leane, who drew from the Edwardian, Victorian and Art Deco eras for inspiration. Leane told People Magazine the center diamond is 2.5 karats with four, .75 karat baguettes on each side. The platinum band is also set with diamonds.

Some say it’s very similar to the Queen’s own engagement ring, which you can see at the end of this story.

Britain's Princess Eugenie wears a ring containing a padparadscha sapphire surrounded by diamonds, as she poses with Jack Brooksbank in the Picture Gallery at Buckingham Palace after they announced their engagement in London, Monday, Jan. 22, 2018. Princess Eugenie is engaged to be married later this year, several months after her cousin Prince Harry's nuptials. Eugenie, the daughter of Prince Andrew and his ex-wife Sarah Ferguson, will marry Jack Brooksbank in the fall, Buckingham Palace said Monday. (Jonathan Brady/Pool Photo via AP)
AP

According to People magazine, the ring's centerpiece is an oval, coral-colored padparadscha sapphire which is surrounded by diamonds and looks quite a bit like the engagement ring of our next royal.

Prince Andrew, second son of Queen Elizabeth II, holding Sarah Ferguson’s hand to display the engagement ring, a large oval ruby set in 10 drop diamonds on a yellow and white gold band, at Buckingham Palace in London on March 19, 1986 after their betrothal became official. Red-haired Sarah, a commoner, has had close family ties to the monarchy for many years. (AP Photo/Pool/Press Association)
ASSOCIATED PRESS

When Prince Andrew proposed to Sarah Ferguson, he presented her with an engagement ring that matched her hair, according to Good Housekeeping. It featured a Burmese ruby surrounded by diamonds and was said to be designed by Prince Andrew himself.

FILE - In this Monday, Nov. 27, 2017 file photo, Britain's Prince Harry's fiancee Meghan Markle shows off her engagement ring as she poses for photographers during a photocall in the grounds of Kensington Palace in London. The jewelry maker who worked on the engagement ring Prince Harry gave to Meghan Markle says it’s been inundated with requests for replicas_ but it won’t be taking any orders for copycat rings, it was reported on Wednesday, Dec. 6, 2017. (AP Photo/Matt Dunham, File)
AP

But by Meghan and Prince Harry's first wedding anniversary, her engagement ring had been completely redesigned.

Some reports say Prince Harry designed both rings but decided to replace Meghan’s solid gold band holding three diamonds with a new eternity band as a gift for their one-year anniversary. According to Good Housekeeping, the ring now features that micro-pave band set with tiny diamonds.

The engagement ring worn by the former Kate Middleton is possibly one of the most famous in the world. It was the ring given to Lady Diana Spencer on her engagement to Prince Charles on February 6, 1981.

Princess Diana and Prince Charles would go on to divorce. Diana died in a car crash one year later.

But the ring stayed in the family when Prince William gave it to Kate when they got engaged in October 2010 in Kenya.

And it’s stunning. The ring features a 12-carat oval Ceylon sapphire, according to Good Housekeeping, and is surrounded by 14 solitaire diamonds set in 18-carat white gold. The maker of the ring, Garrard, the crown jeweler, was said to have been inspired by a sapphire and diamonds brooch made for Queen Victoria in 1840.

The world learned Prince Charles would remarry in an announcement by Clarence House in February 2005.

According to Wikipedia, the Prince of Wales gave Camilla a diamond ring that was believed to have been given to his grandmother, Queen Elizabeth The Queen Mother, when she gave birth to her daughter, Queen Elizabeth II. It features a square-cut diamond with three diamond baguettes on each side.

This official picture of Princess Elizabeth heir presumptive to the British throne, and her fiance, Lieut, Philip Mountbatten, was made on July 10, 1947 in London. The Princess engagement ring can be seen on her finger.(AP Photo)
AP

This story comes from our friend Lauren Kiehna, who writes a blog called The Court Jeweller. Prince Philip was a naval officer, and while he was born into Greek and Danish royal families, he didn't have vast family wealth. But Kiehna said his mother had received a fantastic suite of jewelry from her aunt and uncle. They just happened to be Nicholas and Alexandra, the last emperor and empress of Russia. When Prince Philip got engaged, his mother went to the bank vault, got the tiara encrusted with aquamarine and diamonds, and told Philip to use the gems to make something for his wife-to-be.

The result was a three-carat diamond ring, which, according to Town & Country, Queen Elizabeth wears alongside her Welsh gold wedding band.

Prince Philip also had the Edinburgh Wedding Bracelet made and gave it to Elizabeth as a wedding gift.

The Duchess of Cambridge has been seen wearing the bracelet in public.