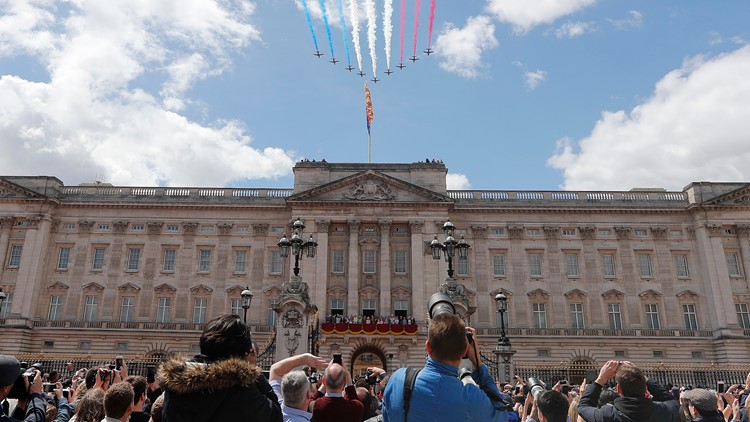 Photo by: AP
Airplanes of the Red Arrows fly over Buckingham Palace during the annual Trooping the Colour Ceremony in London, Saturday, June 8, 2019. Trooping the Colour is the Queen's Birthday Parade and one of the nation's most impressive and iconic annual events attended by almost every member of the Royal Family. (AP Photo/Frank Augstein)

How a St. Louis woman almost got arrested at Buckingham Palace on her royal vacation

ST. LOUIS — It was her European vacation, and she was determined to take photos every step of the way. She had the camera on her phone, but she brought a separate camera just to make sure she could get some really good shots. London was in her crosshairs.

Priority one: the tour of Buckingham Palace. It’s Queen Elizabeth’s official London residence and a working royal palace. There are 775 rooms, and the garden is the largest private garden in London. Only the state rooms, used for official and state entertaining, are open to the public each year for most of August and September and on some days in winter and spring. It had taken a lot of planning to get this far.

“I was stoked the whole trip, just so excited,” said St. Louisan and British royal family enthusiast Brooke about her dream trip to London three years ago.

A photo of Brooke on her trip to England.
Brooke

She bought tickets for the Buckingham Palace tour in advance. She’d arrived a little early, like the tour books said.

“I’m ready,” recalled Brooke. “It says right on your ticket, if you're there queuing less than 10 minutes before your time, you don't get to go. So, I was ready.”

The tour started at the Ambassador's entrance.

With her camera and her phone.

As she walked through the Ambassador's entrance into the main courtyard of Buckingham Palace, she spied the Queen’s Bentley sitting right there.

FILE - In this Nov. 2, 2004 file photo, Britain's Queen Elizabeth II and Prince Philip sit in the Royal Bentley after they arrived in Berlin. The News of the World tabloid said two of its reporters, posing as wealthy Middle Eastern businessmen, were shown round secure areas of Buckingham Palace and allowed to sit inside Bentleys used by the royal family. In a statement Sunday May 24, 2009 Buckingham Palace said confirm an individual has been suspended pending an investigation. (AP Photo/Eckehard Schulz, File)
ASSOCIATED PRESS

“And I took a couple of pictures,” said Brooke.

But then she wanted to really experience the tour without distractions, so she started putting her camera away.

What happened next would give Brooke a vacation story to tell for years to come.

“So, I’m putting the lens cap on my camera, taking it off my shoulders to put it in the camera bag, and I hear on some 17-year-old (worker's) radio, ‘Oh my God, that girl, stop her from taking photographs!’ and there were some expletives in there. It was on the (two-way) radio.”

Brooke knew they were talking about her.

“They called me all sorts of names and insulted my person,” she said. “It's fine. Whatever. I was in a white dress, and I heard them talking about that.”

She knew she was in trouble. Security approached.

“So, they come over, they say, ma'am you really need to delete the photos. And I say what photos?"

Knowing full well she'd taken a couple of photos of the courtyard.

"They said, you need to delete those or you're going to have to come with us. And I said well there's no signs that say you can't take photos, and I referenced other royal palaces where you can take photos," said Brooke.

“They pointed to the signs inside the palace that say you can't take photos, and I said well, that's inside, I’m standing in the courtyard, this is outside,” she said. “And they said, 'Well, if you're not going to delete them you're, not going to comply, you're going to have to come with us.'”

“And I was like, first of all, whoa,” said Brooke.

“I said, you're detaining me? And they said well, if we have to, there's a little room we'll have to put you in. And I said let’s not go that far. I’ll delete the photos, that’s fine."

She took her camera out and deleted two of the photos, but on the second photo, pressed the button that popped the viewer back to the main screen.

"So, it looked like it was empty," said Brooke.

She had secretly saved one shot.

And she doesn’t regret it.

She was able to complete the tour, with security trailing her the entire time.

“At the end of the tour, there was a kid standing next to me and I said, ‘Are you going to follow me the whole way?’ And he said yes."

Brooke wouldn’t have it any other way. But she wonders to this day if the British Intelligence Service, known as MI6, has a file on her.

In all fairness, Royal Collection Trust makes it very clear on its website, and at Buckingham Palace itself, that no non-commercial photography is allowed. The Trust looks after the Royal Collection, one of the most important art collections in the world, and manages the public opening of the official residences of Her Majesty The Queen. There’s airport-style security, staff are everywhere, protecting the vast riches on display.

Let it be a lesson to you if you tour Buckingham Palace on your next trip to London.